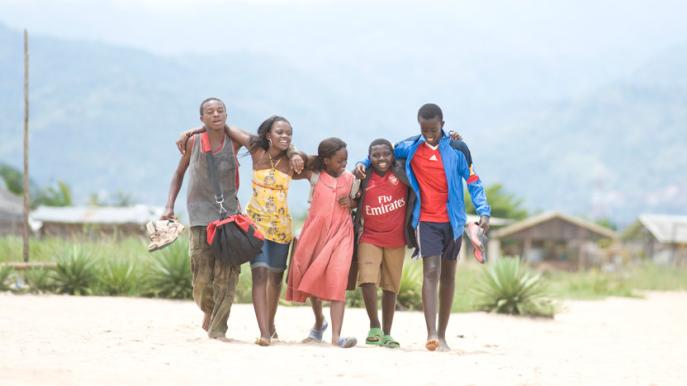 
If you are planning to go and see Africa United and you are hoping for a film about football or the World Cup, you might leave disappointed. That’s not to say football doesn’t figure highly in the film. After all, it’s set in the run-up to this year’s major sporting event in South Africa and focuses on five teenagers determined to get to the opening ceremony – whatever the cost.

It is a beautifully crafted film, with great scenery and a thoroughly believable cast. And what it does – to great effect – is provide us with a sketch of Africa. The names of troubled nations, Rwanda, Burundi, Zimbabwe, Congo, roll off the map. Tribal warfare, genocide and corruption are never far from the storyline. But this isn’t a film about politics or conflict (though, like the football, they’re never far from the narrative). This, first and foremost, is a film about people, about friendship and loyalty, about determination and dreams.

The five youngsters shine – there’s no other word for it – as indeed do the rest of the cast. Their performances are utterly credible and sincere. And it’s not hard to understand why. Several of them have experienced firsthand the pain and bloodshed of Africa: the father of Roger Nsengiyumva, who plays the talented young footballer, Fabrice, was murdered in the Rwandan genocide. Emmanuel Jal, whose character Tulu pursues the group on their journey to South Africa, was born in war-torn Sudan in the early 1980s and was forced to fight as a child soldier. These aren’t just fictitious stories about imaginary people: these are actors exposing their souls to help us understand the kind of situations so many people of the African continent have lived through for generations, what the situation is like now (a side of Africa very few people get to see) and how hope burns brightly for the future.

Africa United is a film rich in faith. On more than one occasion, Beatrice, played by Sanyu Joanita Kintu, prays openly for her friends with a simple faith that combines remorse for past failings and hope for the future. Dudu (Eriya Ndayambaje) – the narrator and ‘manager’ of the team – is the story-teller who describes football as ‘probably God’s best invention’. Football made everyone happy, he says. But then, conflict and jealousies led to pain and suffering and war. It’s not Genesis, but the message is the same!

What I wasn’t expecting with the film was the prominence of HIV/AIDS and condoms in the story. I suppose I should have anticipated that, in view of the prevalence of the pandemic in the continent. It introduced a moving and challenging dimension to the film, right from the opening scene, in which Dudu demonstrates how to make a football with a condom, a carrier bag and some string. I have seen children in Mozambique make some most amazing toys from a few bits of scrap metal and broken cans, so I would never doubt their creativity. Dudu urges his peers not to take risks, saying plaintively how his parents might still be alive today if they had taken precautions. The condom came from the United Nations and the Christian Mission Station is involved in the work of testing, educating and providing Anti-retroviral drugs. No doubt, some might object to the inclusion of condoms in this story. But HIV and AIDS remain a major issue in Africa. It is handled sensitively and, I believe, challenges many attitudes. The teenage sex worker who joins the party, Celeste, played with understated maturity by 16-year-old Rwandan Sherrie Silver, encounters her own redemption – not only when it is revealed that she is HIV-negative, but also because of the love and friendship and support that she receives from the group heading for Soccer City.

Prominent throughout Africa United is this sense of loyalty and team work. ‘It’s not about you; it’s not about me; it’s about us!’ says Dudu at one point. And that really summarises the camaraderie the teenagers feel as they support each other on the road. When the mercenaries talk about them joining the rebel army, he tells them in no uncertain terms: ‘We’re not an army: we’re a team!’ It is also a story of dreams and ambitions. Beatrice’s decision to stay at the Mission Station to study to be a doctor, as the others continue to South Africa, is touching and reflects her own ambition: Ugandan born Sanyu who plays her is planning to study law, as well as act. And the way Dudu is carried on the final leg of the journey to Soccer City ... well, I defy anyone not a feel a lump in their throat.

If I were to have one criticism of Africa United it would be this. It is just a bit too clean – maybe even sanitised. The five youngsters travelled 3,000 miles from Rwanda to South Africa. Yet they still arrived at their destination looking clean and fully fed. Even when their money ran out, they never complained that they were hungry or tired. Fabrice had to sacrifice his trainers at one point, but we never felt the pain and discomfort of his blisters and bloody soles. And – with the exception of a couple of thugs – everyone they met was so darn nice: truck drivers on the road were happy to stop and give them a lift; even the officers at border control waved them through, even though they didn’t have the necessary papers. After 3,000 miles and all the dramas of their journey, I wanted to feel hot and dusty and exhausted too. But maybe that’s how things are in Africa when you feel passionately about something like football and have your ‘team’ around you.

Between doctrine and discipleship: reflections on the Annunciation