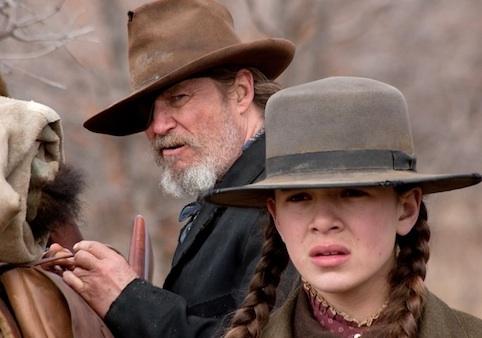 
Charles Portis’ novel True Grit was first published in 1968 – a date which may come as a surprise to you (it certainly did to me). The date’s significant because the literary text for True Grit was therefore written towards the end of the period of mass popularity of the western genre in its various forms. Over the years, the gunslinger had appeared in every imaginable form – in comic books and graphic novels, in magazines of stories (such as those read by the men in the bunk-house in Of Mice and Men), on stage in the Wild West Shows of the 1890s and 1900s, and of course in cowboy films from the early days of cinema. With the exception of Blazing Saddles and Carry on Cowboy, most of these other tales took the genre seriously, either for its own sake, or as in the case of High Noon, used it to discuss political issues such as McCarthyism. True Grit, coming towards the end of the popularity of the western genre, has a certain detachment from it all – it is far from being a parody, but it is much less a western yarn than a story about western yarns.

Portis’ incredibly affectionate text is consequently full of playfulness and irony. The layering of these meanings starts with the voice of the protagonist, Mattie Ross. She’s an elderly woman, telling the story of her adventure in the Wild West years before, when she was but a 14 year old girl (if we choose to believe her, of course). Mattie is, therefore, an unreliable narrator – but her voice is one of the entertainments of the novel, with its persistent chiding intrusions on matters as diverse as religion (she is a Presbyterian) to drink (she disapproves) and rolling one’s own cigarettes (at this, she is better than most of the men in the story).

In Portis’ text we become good friends with the older Mattie, a cantankerous spinster, owner of a private bank, with a side-line in creative writing (drafts of novels and stories that are usually, she complains, turned down by the publishing houses, who reject her work as too ‘discursive’. She’s of the view that ‘nothing is too long or too short either if you have a true and interesting tale and what I call a “graphic” writing style combined with educational aims’).

None of this narrative complexity made it into the 1969 John Wayne classic version, and neither is it in the Coen Brothers’ remake. This recent film is as straight a telling as the earlier one, just in a slightly different style. Maybe that’s not surprising, because (as they’ve admitted themselves) the Coen Brothers are now part of the establishment: and what could be more establishment in US cinema than the production of a cowboy film? And a remake, at that. This conventionality is obvious from the start, as the camera pulls back to show us a vast set, teeming with expensive extras in an apparently immaculate recreation of frontier America in the 1870s. The conventionality is there also in the score, which all rather sounds the same, with none of the quirky musical anthropology of Minghella’s Cold Mountain or their own O Brother, Where Art Thou (whose sound-track introduced the bluegrass violinist Alison Kraus and her band to a wider audience).

A wittier score is one of the ways the production could have introduced into the film some of the layers of irony and detachment that made the novel True Grit an enduring success. Instead, entertaining and beautiful though this 2010 version of True Grit is, there is a lot of stolid reproduction of the genre in it: Matt Damon and Jeff Bridges are extraordinary, but their performances are pretty much all hunk and bulk, shootin’ and tootin’. The subtler possibilities about what either of these men might have meant to the imagination and memory of Mattie Ross (either at 14 or at 68) are lost in this version.

Take, for example, the idea of ‘true grit’ in the first place: Mattie Ross’ pursuit of vengeance is also a hunt for a man with ‘grit’ who will replace her murdered father – one of the poignancies of the novel, is that we learn that she never succeeded in that aim; although many readers come to love her, she never came to love herself. So maybe we all assume that ‘grit’ is a reference to John Wayne and Jeff Bridges or even Matt Damon – the leathery masculine hunks – but really, the grit is in the core of this very determined (and imaginary) young woman and the choices she makes about her life.

Is religion good for your mental health?