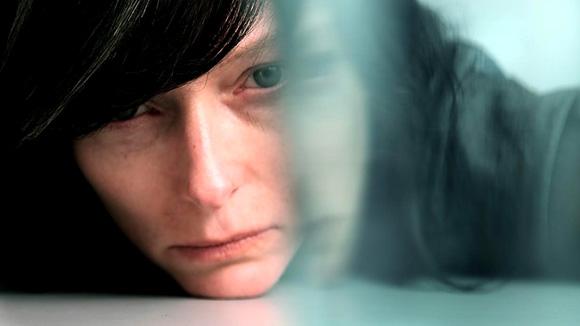 
In the aftermath of the 1999 Columbine murders (when Eric Harris and Dylan Klebold killed 12 of their fellow pupils and one teacher before turning their guns on themselves), Lionel Shriver decided to focus on what it might have been like to have been the mother of one of those murderous sixth-formers. The result was her novel We Need To Talk About Kevin, a series of unanswered letters from a tortured mother, Eva, in which she gnaws at her memories and tries to construct an understanding of her relationship with her son, the mass-murderer.

It has been reported that Lionel Shriver had a hard time getting someone to publish the book on which this film is based. I suspect this may have been because a number of readers will have found the first-person narration of Eva difficult to tolerate after the first ten pages or so. After all, she is an unpleasant mix of the self-obsessed, the self-accusing, the self-justifying and the complacent; a woman who has yet fully to come to terms with the fact that her son is a killer. She writes not exactly in clichés, but in the commonplace banter of the satisfied, untroubled, moderately-educated and comfortable American middle-class. Were it not for the other evidence, it would be easy to assume that Eva’s voice is Lionel Shriver’s and that Lionel Shriver can’t write very well: Eva’s prose is rattled-off with a relentlessness that is slightly unhinged, and frequently demonstrating not exactly what psychiatrists call ‘flight of ideas’ but a jumpiness that isn’t far short of it. A quick look at some of her other work, however, shows that Shriver can write very well, and Eva’s 500-page catharsis is not an undisciplined splurge of consciousness, but a skilful, tightly-controlled and sustained characterisation. Eva’s story is difficult to read because Eva is not a very pleasant person.

All this presented Lynne Ramsay and her team with a particular challenge: how to make a film that honours the complexity of this narration. They had the sense not to attempt any literal rendition of the novel. There is no banal narration, no gawky realism – rather, this piece is full of innovative and filmic ways of telling the story. A car journey to the juvenile prison is represented not by the usual establishing shot, but by the distorted footage of trees flashing past windscreen. The disturbingly blurred boundaries between mother and son are shown to us not by soap-opera dialogue, but through language of film: a shot of Eva plunging her face into a bowl of water (taken from below the surface, from the bottom of the bowl), which suddenly cuts to Kevin filmed from the same position, pulling out of the water, as if escaping from the cleansing suicide his mother had hoped for. The normal and day-to-day are seen through a lens that focuses on details that suddenly all seem blood-coloured and visceral – jam, streetlights, paint; moments of emotional intensity in this film don’t just end, but slip into fuzzy, impressionistic collages captured from ordinary American life: Ramsay gets the point about the book – it’s a 500-page experience of a subjectivity close to the edge of insanity.

A key element in the novel is that the first-person narration invites our empathy: Eva was a successful woman and Kevin’s birth forces her to give up her career and the travel journalism that has been either a compulsion or a calling. What makes this worse is that the baby is not an easy child, but a squirmy boy tortured by colic, who develops into a recalcitrant toddler, a brooding child and finally a dangerous teenager. Eva does not like Kevin. It is this key insight which catches the attention – and it goes a bit further: Eva does not like Kevin. Kevin goes bad. Cause or effect?

Some parents do not like their offspring (either as children or as adults), and some people who have children (possibly including some watching the film or reading the book) are not ready to be parents, and resent the demands their children make on their lives. In the real world many people adapt to this and change their priorities, giving-up their careers and leisure; but some do not, and in some of these cases, this has a negative effect on the children. But this less-than-good-enough parenting doesn’t usually appear to result in mass murder, but the slow, relentless misery of an adult life built on insecurity or the simple lack of love. And given that the deficit and the distraction can be as much the father’s failure as the mother’s, some have wondered why there is the central focus in this film on the rôle of the mother in creating these tortured monsters. In my view, however, both the book and the film seem to avoid a simplistic allocation of blame, not least through the complex play of empathy and analysis, and an awareness (certainly in the novel) of the wider influences on Eva’s psyche.

Nonetheless, the fact is that some parenting – some mothering – is less than ‘good-enough’, and the effects on the children concerned can be devastating. That’s worth thinking about, and both the book and the novel make us do just that. This is an excellent film – it achieves something unusual, offering a thoughtful and filmic version of a very popular novel. It is a gripping, compelling and terrifying descent into distress, denial and egotism (and may result in you reading more bedtime stories, for a while).