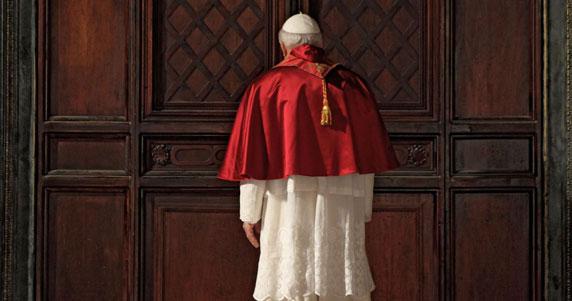 
One of the pleasures of attending a film that is shown as part of the London Film Festival is the special guest appearances. We Have A Pope – or to give it its original title, Habemus Papam – was one of the last offerings in this year’s festival and formed part of the series of Italian films shown. To the surprise and, I daresay, delight of the audience, Nanni Moretti, the film’s writer and director, was there and introduced the film personally.

A strangely inarticulate man, even in his native Italian, he was nonetheless humorous and honest about the various misgivings he had about presenting a film set at the heart of the hierarchy and practices of the Roman Catholic Church: the election of a new Pope. He spoke of the fears that the Church had when they learnt of his project – fears that it would ridicule the Church or damage its reputation or turn the Pope into some kind of caricature. But this is a film which uses the circumstances of a papal election as a vehicle for something much deeper and more human. It’s not about Catholic doctrine or the Church’s way of doing things; as Moretti himself said, he didn’t want to focus on ‘the scandals or crimes’ of the Church but to make, instead, ‘another kind of movie’. This he has succeeded in doing.

Members of the audience at the cinema were mixed – in terms of ages, genders and, presumably, faith and language (it’s frustrating having to catch up with the comic lines from the sub-titles a few seconds after people who are fluent in Italian!). At the heart of the film is the election of a successor to a recently deceased Pope: it starts with his funeral, and the memory of Pope John Paul II’s plain wooden coffin on the steps of St Peter’s Basilica would have been fresh enough in people’s minds not to alienate those members of the audience who did not subscribe to the Catholic faith. The process too of the Conclave – with Cardinals processing solemnly into the Sistine Chapel where they elected a new Holy Father, and the announcement of success through means of white smoke from a chimney over the Vatican – was a familiar story told on our television screens just over six years ago.

Of course, the detail of what goes on in a Conclave is supposed to be top secret. We can only speculate about the mood in the Chapel, the intrigues, the personalities and the process of election. Moretti captures the situation with warmth and an element of understated humour: a power cut which plunges the assembly into darkness; Cardinals trying to see what their neighbours have written on their ballot papers, like schoolboys cheating in an exam; and the fervent prayers as the announcement approaches, increasing steadily in volume: ‘Not me, Lord’; ‘O God – please don’t let it be me that they have elected as Pope!’

As happens in the various ballots, so rumours suggest, the so-called front runners register a fair share of votes in the early stages. But when it reaches an impasse, a dark horse – someone who’s never been in the frame, apparently – emerges. Cardinal Melville, a quiet, unassuming, sensitive man, is applauded and asked formally whether he is prepared to accept their decision to become Supreme Pontiff. After some hesitation and with obvious trepidation, he reluctantly accepts. But at the announcement from the balcony of St Peter’s – ‘Habemus Papam: We have a Pope’ – he panics as the enormity of what lays ahead dawns on him.

And this, really, is at the heart of the film. Some have claimed the film is principally about the relationship between the new Pope and his psychoanalyst, played by Moretti himself, as The King’s Speech focused on how King George VI and his speech therapist, Lionel Logue, related to each other. Personally, I found this relationship secondary. At the core of We Have A Pope, to my mind, was the man himself, played with warmth and utter humanity by Michel Piccoli: a man with misgivings and fears, scared of the weight of office that the papacy would place on his shoulders, his imminent responsibility in leading one billion Catholics around the world and being a point of reference for life’s great questions. Who, in his right mind, would accept such a role willingly and happily, unless he believed it was God’s will and God would give him the strength to perform this daunting office?

The new Pope (he never assumes a name) needs time and space to adjust. He disappears from view: to his private apartment for prayer and contemplation before appearing at St Peter’s before the mass of people in the square beneath, according to the Vatican spokesman; but in reality, he escapes into the streets of Rome, an anonymous character with misgivings and regrets over a career in the theatre that he was never able to pursue. His is a journey of questions and searching, helped to an extent by his psychoanalyst, but ultimately by his own personal exploration and by delving deep into his soul, his past and his psyche.

In terms of believability, I felt Habemus Papam was a film of two parts. On the one hand, Piccoli was utterly reasonable and credible. I could empathise totally with him and, by the time the tale reached its conclusion (and I’m not going to spoil it for you), I actually found myself feeling quite emotional. Was he a ‘real’ Pope? I saw traces of Angelo Roncalli (Pope John XXIII) in him, and certainly Pope John Paul I. The long period of suffering prior to John Paul II’s death was also alluded to and these references, whether explicit or implicit, left the impression that, yes, this could indeed happen. What if a Cardinal, elected at a Conclave, suddenly panicked and questioned whether he was worthy or strong enough to accept the position of Supreme Pontiff, as decided through ballot by his fellow Cardinals?

Where this film failed for me, however, was in the portrayal of the College of Cardinals in the period of limbo between the election and the new Pope’s reappearance at the Vatican. They became almost caricatures, playing an inter-continental volleyball tournament and games of cards. Nanni Moretti, in his role as the psychoanalyst left behind as the Pope traipsed the streets of Rome in search of answers as to what he should do, was the instigator of these activities. The Cardinals were credible in part, and warmly human: a highlight for me was when they were told what the odds had been for each of them before the Conclave started. Their portrayal was not disrespectful in itself. But as they waited for Cardinal Melville to return, they all felt disappointingly farcical.

Nonetheless, We Have A Pope is sympathetic and in many ways spectacular. The sets are awesome: it really is difficult to spot where the real Vatican ends and the studios begin! Moretti is a self-confessed atheist, which makes the warmth with which he regards the papacy quite amazing. It is not hard to imagine a Catholic writer or director doing something similar with much less sympathy and verve. Is it a great film? No, it is not. But it is a very kind film, an interesting film – indeed, a powerful film. And Michel Piccoli’s portrayal of a man wracked by doubts and fears and questions will strike a chord with many of us – whether we are being elected to high office or not. The film is ultimately about our humanity.


We Have A Pope Trailer