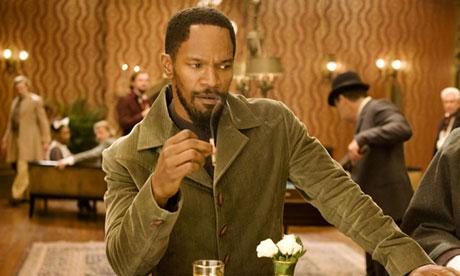 
This is a film about contemporary racism, using the situation of slavery in pre-Civil War America as a metaphor for it. It is a post-modern historical fantasy, and so fuses the generic conventions of blaxpoitation cinema and the spaghetti western. The features borrowed from the western are those of the gunslinger in search of his wronged woman, the strangers who ride into town, bounty hunters, and spectacular, comic-book violence. From blaxploitation cinema the film borrows the Gone With the Wind setting, and some shocking scenes of slaves fighting other slaves to the death at the behest of white characters.

In the past, my frivolous approach to on-screen gore has given my Jesuit advisers occasion to raise an eyebrow; however, I am under a duty to my largely Catholic readership to acknowledge the excessive violence in this film. It needs to be said here that if you are of a sensitive disposition and really don’t like the sight of blood, do not go and see this film. Some people have found the representations of inhumanity so graphic as to be simply unbearable, and have had to walk out.

The question of violence is linked to the allegation that Django Unchained, rather than being the anti-racist film that Tarantino has claimed it to be, in fact perpetuates the logic of racist cinema. This is a subtle point – one made by Spike Lee among others – but it relates to Tarantino’s obsession with low-budget, 1970s action films. From these sources, Tarantino has mined a baroque cinematic vocabulary that has given visual coherence to the films that carry his name, and earned him the title auteur. However, in this particular case, the question is whether formalist use of comic-book violence and witty replication of the conventions of blaxploitation cinema reinforces racist stereotypes rather than undermines them. The allegation is that simply to make what is (generically, if not in intention) a blaxploitation film about slavery is fundamentally and unavoidably disrespectful, whatever the other motivations or justifications. Imagine a musical about the potato famine, or the life of Hitler, and you will get my point.

Then there is the question about language. An extraordinary amount of type and hype has been generated over the repeated use of the word ‘nigger’ in the script (reportedly over 100). A white American film critic called Jake Hamilton got into some difficulties with Samuel L. Jackson because he was cringingly unable to say the word, despite wanting to know why there were so many uses of it in the film. Spike Lee has also asked (reasonably, I think), exactly why Quentin Tarantino’s writing includes it so often. And there are others who accuse Tarantino of racism simply because of the language that his characters use.

I find this debate a bit unproductive. It is interesting, and important, to unknot the semiotic macramé of intention, reproduction, othering and the interrelationship of parody with the visual language of violence and racism; but it is perhaps more immediately useful to ask a different question: why does this film exist, and why is it causing so much debate?

This is a much simpler question to answer: this film exists – and people are talking about it so much – because we live in a racist society. Race was constitutive of the American nation[1], and racism is embedded in British society, too. Some British readers of this journal might be surprised by that last comment, complacent in the UK’s self-image as a tolerant melting pot. But the tolerance Britain most easily extends is to racist structures and systems, such as an education system in which racial inequality is locked-in, with a rate of progress towards equality so slow that black school children will not close the gap with their white school mates until 2054.[2]

If you are white, you may not get this point. That is because what white people often don’t see is that they are white, nor do they notice the privilege their ethnicity brings them.[3] A scene at the end of the first half of the film provides a metaphor for this. After embarking on a eugenic tirade about phrenology, the obnoxious slave-owner Calvin Candie offers his guests – never forgetting the myth of southern hospitality – a dessert: a slice of ‘white cake’. There is the briefest of pauses, as the white man stands complacently triumphant in his perfect white plantation house surrounded by his white women folk, eating perfect white cake – all of it masking the facts of the injustices on which it is based.

It doesn’t end like that, of course; it ends with Django shooting dead every white slaver and redneck who comes within range, and finally blowing Candie’s perfect white plantation house sky high.

That explosive conclusion can also be read as a metaphor: you might find, like me – God forgive me – that after all the sadism, the denial, the deceit, the self-interest masked by nice clothes and nice words (and I don’t just mean in the film), the bloody, vengeful ending comes like a triumphant catharsis; that the whole system is so irredeemable that it sometimes feels as though the only answer is to blow the whole thing sky high.

[1] See Simon Schama’s Rough Crossings about slavery in the US War of Independence, and Dee Brown’s study of the ‘conquest’ of the west Bury My Heart at Wounded Knee.

[3] In making this comment, I am drawing on a body of academic writing called Critical Race Theory.