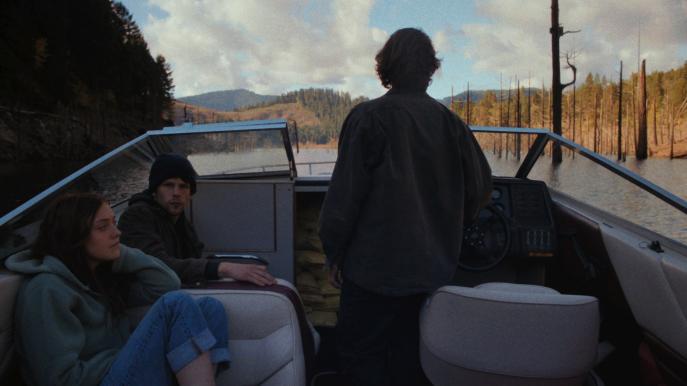 The BFI’s promotional material for Night Moves describes the film as a ‘taut political thriller’. I would be hesitant to describe it as taut, political or thrilling in essence: director Kelly Reichardt creates suspense rarely and subtly, but nonetheless effectively; and the subject matter is far more personal than it is political. The story centres on three radical environmentalists, Josh (Jesse Eisenberg), Dena (Dakota Fanning) and Harmon (Peter Sarsgaard). In what is a film of two halves, we see the lead up to and then the aftermath of their attempt to blow up a dam.

The first half of the film is composed largely of still-camera shots and there is minimal dialogue. This creates a slow and contemplative pace, but there is little to contemplate at this stage of the film. The only comment that gives any context to the group’s industrious activity to prepare their stunt is a remark that vast quantities of salmon are being killed so that people can ‘run their iPods every minute of the day’.

It is clear that the activists intend their endeavour to be a wake-up call to the damage caused to ecosystems by human greed; what they expect the immediate practical results to be is unclear and remains unarticulated throughout the film. However, whatever might have been the environmental and/or political effects of their exploits are dwarfed by a consequence that none of them predicted. It is the trio’s reactions to this that dominate the film’s second act, rather than a full assessment of the efficacy of their actions. Others proffer their opinions about what happened to the dam, for example Josh’s companions in the sustainable cooperative where he lives and works (although they do not know of his involvement): their discussion gives voice to the debate of whether the ‘theatre’ of such action and the attention it draws has any value when compared to the everyday efforts of, say, sustainable farming. But the film does not offer a platform for a full treatment of this question.

The first half becomes more interesting in retrospect. The workings (or not) of the consciences of each of the trio in the second half highlights the selfishness and single-mindedness of their initial attitudes. The lack of discussion of the potential fallout of their actions seems neglectful when they have to face up to the undesirable consequences of their behaviour.

The somewhat one-dimensional characters we meet at the beginning are given more shape in the aftermath of the unexpected crisis. The portrait of Dena that the audience is led to paint is of a young girl in search of a cause through which she can rebel against her privileged background; her reaction to the events allows the camera to cut through her seemingly impervious exterior and reveal an inner turmoil that makes her more accessible. Josh shows initial signs of being similarly traumatised by the events themselves, but it is his response to Dena’s reaction that forms his character. Fanning and Eisenberg work well together from beginning to end as the nature of their relationship changes.

The film is certainly a slow burner, and gives one more to think about afterwards than during the film – whether you take that to be a positive or a negative is up to you. Do not expect from Night Moves an in-depth study of an environmental project, let alone any attempt to recruit its audience to any such cause. Instead the film raises (but does not answer) questions about the motivation and integrity of activists: where does the line lie between commitment and fanaticism? How does one decide whether to prioritise personal concerns or commitment to a cause – or even to override both – in the face of conflicting options? Are we culpable for the unforeseen consequences of our actions? And, if the value and dignity of human life is no longer the primary concern, where did things go wrong?

St Henry Morse SJ: ‘A saviour of life unto life’
Alfred Delp: committed to Christ
Ignatius and the Stars
‘The Fight Between Carnival and Lent’
Preparing for the Synod: Listening to the gospels