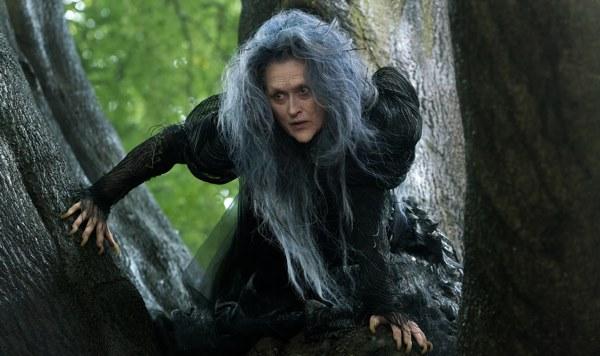 ‘Life isn’t a fairy tale.’ We often use this phrase to chide and drag back to reality naïve folk who expect situations to work out perfectly. Into the Woods combines several Grimm Brothers fairy tales to make an original fairy tale about fairy tales, and in doing so it shows us that ‘happily ever after’ is rarely the end of the story.

Wish-fulfilment is the central theme of the film, which is a screen adaptation of Stephen Sondheim and James Lapine’s popular Broadway musical. It begins with a lively and memorable song in which each character expresses a deep desire for some particular wish to be granted. The wish that sets the stage for the unfolding of the narrative is that of the Baker (James Corden) and his wife (Emily Blunt): they are wishing for a child. The Witch (played fantastically by Meryl Streep) makes a dramatic entrance and informs the couple that their childlessness is the result of a curse that she placed on their family. She offers to lift the curse if they can retrieve four items for her from the Woods. Desperate to have their wish granted, they reluctantly head into the Woods.

There they meet Little Red Riding Hood (Lilla Crawford), Cinderella (Anna Kendrick), Rapunzel (Mackenzie Mauzy) and Jack (Daniel Huttlestone), all of whom are also in the Woods hoping to have their own wishes fulfilled. The intertwined lives and desires of the characters allow the film to explore the complexity of morality and the consequences and conflict that arise when wish-fulfilment is pursued selfishly.

Reality creeps into this fairy tale as it becomes clear that each character is flawed. A particularly interesting line comes from Prince Charming (Chris Pine), who casually remarks that he was ‘raised to be charming and not sincere’. Even though I was familiar with the original stories, the film certainly caused me to reassess the motivations and actions of the characters, and highlighted nuances in the stories which I was unable to comprehend as a child. Jack, for example, thinks that his escapades up and down the Beanstalk are fun and innocent, and affect him only. In the second half of the film, which is darker than the first, we learn the implications of such a carefree and selfish attitude.

The characters make ‘moral’ decisions based on the benefit to themselves. The viewer is left to judge who is good and who is bad, since no absolute standard of judgement is given. As the Baker remarks: ‘Witches can be right/Giants can be good/You decide what's right/You decide what's good’.

The genius of the film lies in its combination of fairy tale with an accessible approach to the real and complex themes underlying the narrative. However, a film with so many storylines is bound to feel rushed, and occasionally one wants to stay a bit longer and go a bit deeper with particular characters and stories.

The music is thoroughly enjoyable and the costumes are fantastic. It looks as if the cast had great fun; joy and enthusiasm are evident in all of the performances, especially those of Meryl Streep and Chris Pine. It is a film for the whole family: the comedy and overall sense of excitement will appeal to young audiences, and the thought-provoking adult themes are not overlooked. Fans of Johnny Depp and his ever-amusing wardrobe and makeup will want to look out for his brief appearance as the Wolf, even if the scene in which he features leaves them with an uneasy feeling.

Children will be enchanted by the sense of magic throughout the film. As for adults - even if the film doesn’t offer a solution to the difficult problem of how to discern and pursue our desires wisely, it makes us stop and reflect on the meaning of the words ‘I wish’.