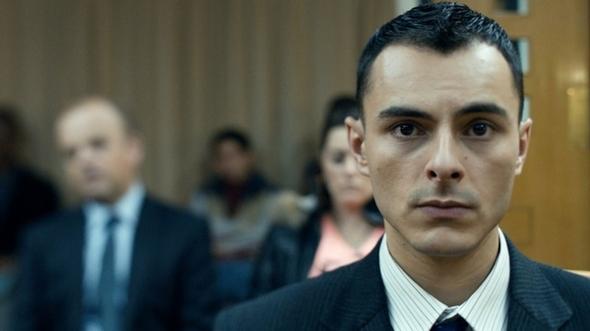 
‘Based on the real stories of teenagers seeking asylum in the UK, Leave to Remain is a provocative coming-of-age drama where all hope rests on the story you tell.’[1] Written and directed by BAFTA-winning documentary-maker, Bruce Goodison, the production was the culmination of three years’ research into the situation of unaccompanied young people who have left conflict zones to seek refuge in the UK. Realising that these children and teenagers who live in a ‘world unseen and unreported’ would be too vulnerable to be the subject of a documentary, Goodison set about getting to know some of them. He felt that their stories were ‘epic’, that they warranted being the subject of a feature film. So he started a film school for young people and, through a series of workshops, gradually assembled a script, a cast and a crew. The part-improvised film was then shot over just 22 days with a mix of professional and aspiring actors.

We first meet Omar, Abdul and Zizidi in a classroom, where their English teacher, ‘Uncle’ Nigel, makes slow and painful progress with his students. We sense immediately that the situation is a little beyond him, despite his care for and patience with them. We then follow the ups and downs of their lives outside the classroom: we see them exploring the wilds of the British countryside on an outward bound weekend, where Abdul, the farm boy from Afghanistan, is frightened of planes overhead but enjoys chasing sheep. We accompany Omar and his friends on a night out to a festival, which turns sour as one boy is stopped by police for papers that he does not have. We sit in on an assessment meeting with Zizidi, who bravely enters the big Home Office buildings in Croydon, only to struggle to maintain her privacy and dignity as she is questioned for evidence of the brutality she has lived through. The realisation starts to sink in that any one of them might be the next to be sent back to the situations from which they have fled. We are witness to their fears, their coping tactics and their encouragement for one another.

The film exposes the flaws in the asylum system in Britain and brings to light the emotional dilemmas of those who work within it, as well as those who enter it seeking safety and the status of ‘leave to remain’ here. It seems to propose that asylum-seeking can be seen as a game, with winners and losers chosen according to who can tell a compelling story; even the film’s website claims that, ‘the asylum system is a cruel game of chance’. Zizidi relies on an honest but short Home Office interview and the testimony of the medical personnel who have seen her scars. Omar has the support of his teacher and his girlfriend, both of whom stretch the truth in court, as they feel it is the only way to protect him. His story reveals the impact of trauma on memory: with repeated questioning, with time and with the breakdown of trust his narrative of what happened subtly changes, calling his testimony into question. Omar, once exploited by and working for the Taliban, finally gets his papers; Zizidi, a victim of gender-based violence, not persecution, is turned down and must prepare for her appeal. I felt the film was fair in being critical of the criteria and the system, without judging those dependent on it for their livelihoods and their lives.

There is brilliant humour throughout, as one might expect of a coming-of-age drama. There are plenty of comic teenage moments: getting into trouble on a night out, negotiating a girlfriend-boyfriend relationship, reluctant participation in a school trip. There are also tender moments where sharing music replaces a common language and serious conversations. But sometimes it is hard to know whether to laugh or cry, for example when Abdul tries to cook for the first time, in a moment of emotional turmoil. And the observation that ‘the hand of God is stuck’ might be taken not just as a comment on the comical failing of nativity play scenery, but on the apparent absence of divine intervention in the asylum system.

It is not always clear what is going on; the editing makes the action seem a bit disjointed at times, which perhaps reflects the chaotic and confusing lives of these young people. The way in which their dignity is diminished is sometimes hard to watch, especially when social workers are drafted in to identify Abdul’s age by checking his teeth, or Zizidi has to explain how she got her scars – from her husband. At times, the audience is unsure of how to react to such complex circumstances; we cannot relax and we even begin to question at times whether these young people are the victims. However, there are welcome moments of relief, like their reactions to seeing snow for the first time at Christmas.

The importance of story-telling is epitomised by Nigel and Omar’s relationship. They are often seen sharing a story: in an awareness-raising talk, in the classroom, with Omar’s lawyer, in the courtroom, and finally in in Nigel’s kitchen where the teacher challenges his pupil about his ‘truth’. Nigel is complicit in weaving narratives to save Omar, but becomes defensive when he feels vulnerable: ‘I lied for you’. It transpires that Omar and Abdul knew one another back home - a mixed blessing - and they have to recreate a new story for themselves now, one in which Omar learns not to control the younger, less educated boy, but to care for him and help him leave his past behind: ‘Whatever happened in that hell hole stays there.’ Zizidi, too, has to discern the role she must play for Abdul: she cares for him, having left her own children in her country, but refuses to take on the role of his mother at his request. Still they are a source of healing for one another and help re-create a family in the heart of the foster home where, with others, they will stay until they find out if they have leave, or not, to remain.

Self-sacrificing love in the workplace