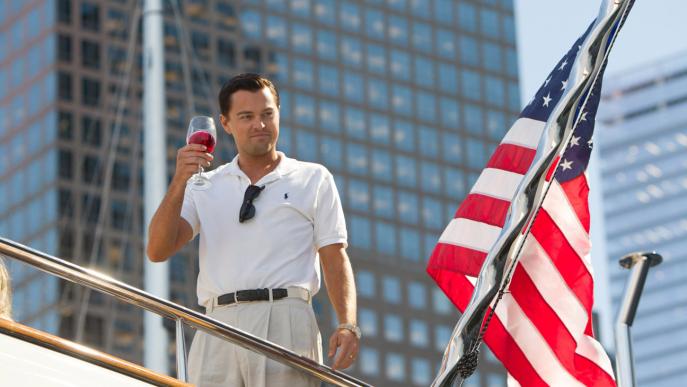 If there is one word that can sum up Martin Scorsese’s new film, The Wolf of Wall Street, it would be ‘excess’. There is no other way to describe succinctly this bulging, three-hour tale of Jordan Belfort, one of the wealthiest men working – and manipulating – Wall Street from the late 1980s. The core story is prime Scorsese territory; merciless, money-hungry, philandering young man rises to great wealth and infamy through nefarious and highly illegal means.

From Goodfellas, through Casino and on past The Departed, Scorsese knows how to weave a tale of violence and corruption on both sides of the law. His ongoing collaboration with Leonardo DiCaprio has spawned some of Scorsese’s finest works. Indeed, the comfort with a regular leading man served the director so well in his years with Robert De Niro that it is no surprise that he has chosen to work so often in recent times with DiCaprio.

And yet, there appears to be a whole new freedom in Scorsese’s work – this is undeniably the funniest film he has ever directed. Very early on, a brilliant Matthew McConaughey cameo sets the tone for what is to come; themes of greed, drugs, the lure of empty sex and pulsing music all play a part. If the viewer dislikes what they have seen by the end of this scene, they might as well shuffle towards the exit – they are hardly going to find solace in the following 2 and a half hours.

However, they would miss some perfect comedy. There are parts of this film that are not just brilliantly, darkly humorous, but downright slapstick. One set piece in particular showcases DiCaprio in one of the most hilarious physical comedy pieces committed to celluloid this century: a fifteen minute sequence of riotous, politically incorrect hilarity. This scene also takes in Jonah Hill’s character, Donnie Azoff.  It just so happens that these events also serve to spell the beginning of the end for Belfort’s high living. Scorsese does comedy extremely well, but always with a point to it.

DiCaprio and Hill's chemistry on-screen is one of the sheer delights of the film. Their two central performances are nigh on their respective career bests, with Hill playing an unhinged Azoff with at times feverish delight. But special notice must go to DiCaprio, who steers the audience through the excesses and sheer debauchery with aplomb.

There is undoubtedly a maniacal joy to this film, a full embracing of the complete madness and heights of excess that life on Wall Street brings. The film depicts characters living head-spinning, hardcore and unapologetically brash lives. They are on a pursuit of the worst excesses of the American Dream. There is constant Class A drug abuse, frantic foul language and explicit sexual content. The film’s gratuitous drug use and moral vapidity makes Breaking Bad look like Disney.

However, one suspects that there may actually be a point to be made amid all this excess. There is a sinister hypocrisy boiling under the surface of Belfort’s lies and debauchery. This is evident from the very first scene, when a serious, earnest-looking advert for his company is, in a heartbeat, completely undermined by a scene of Belfort and a colleague throwing a dwarf at a giant dartboard. Then, Belfort proclaims that his company is the very essence of all that is great about America, where capitalism can make anyone rich, while later, his Azoff screams obscenities to the USA when the FBI start closing in on their company’s illegal dealings. There is a very real sense of these characters searching for an a la carte life – more than happy to do whatever it takes to earn obscene amounts of money, but lacking in integrity when, as one character says, ‘the chickens come home to roost – whatever that means’.

So, while this film might seem to celebrate the worst things about the materialistic human character, there is a sense by the end of it that nothing can go completely unpunished. The excesses are pursued, but the main characters’ lives are invariably damaged and, ultimately, Belfort gets at least something of what is coming to him. Whether or not he has fully learned his lesson is not a question for the audience to answer; and there might be some doubt by the time the end credits roll of how Scorsese regards this life and its consequences. But Belfort’s initial aim was to show people how to make use of ‘supply and demand’ salesmanship and at the same time, that is what is at stake in this film: the strength of the viewer’s feelings about this level of excess will dictate how much they engage with the film. Supply and demand – simple salesmanship.