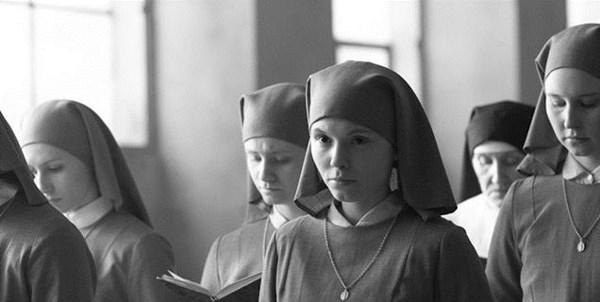 Films about nuns tend to be laden with ideological and cinematic clichés.  The sisters are either impossibly beautiful, haunted souls hovering on the edge of ecstasy; idiotic but jolly cheerleader types, liable to break out into spirit-lifting song at the twang of a guitar string; or monstrous harpies persecuting innocent children with sadistic zealotry.  Either way, lunatic religion and the repression of overwhelming sexual impulses are never far from the surface.  The inner life that has these sisters gazing permanently into the unseen distance, gurning at the problem-laden in need of a lift or scourging infants with their rosary beads never reveals itself with any particular clarity.

Shot in monochrome with such aching restraint that it makes most current cinematography feel like a visit to a fast food outlet, Pawel Pawlikowski’s Ida is a remarkable exception to this rule and works brilliantly, both as an artistic treasure and as a thoughtful and provocative tale set within the context of religious life. Set in Poland in the early 1960s, it tells the tale of Anna, a novice in the convent which rescued her as an orphaned baby.  The bleakness and sterility of her surroundings are evoked powerfully within the convent interior but also by parallel shots of the wintry weather outside.  The sense, though, which gathers momentum as the film progresses, is that it has been stifling winter in Poland, within and without, for long, dreary years.  Anna is content enough in her life, or at least sufficiently resigned to it to be shocked and fearful when the briskly wise superior of the community reveals that Anna has an aunt who has asked to see her and insists that she does so before taking her vows.  The closed world of rural Catholic Poland, which has been Anna’s entire universe, is broken open suddenly and brutally as she sets out on her reluctant voyage of discovery.

Anna discovers her birth identity as Ida, born to Jewish parents who disappeared during the war.  Her aunt, Wanda, is a lawyer who played a prominent part in the life of Communist Poland but is now disgraced.  She has neither tenderness nor respect for her niece’s vocation, smoking and fornicating her defiant way through life with a ferocious determination.  Agata Kulesza plays a fine turn as the aunt: she is fierce but engaging, maddeningly nihilistic but compellingly sad.  Neither she nor Anna/Ida – also a fine performance from newcomer Agata Trzebuchowska – is inclined to give way to the other, each, in her own way, being doggedly determined to live according to her chosen path.   The result is an uneasy relationship of dry comedy and occasional, rueful understanding.  But the past pulls on them both inexorably, and as they go deeper into their search for the truth, their uncomfortable companionship becomes a force to be reckoned with as they meet a wall of secrets and lies in trying to discover the fate of Ida’s lost parents.

Ida proves to be neither a nymphomaniac in the making nor a shrinking violet.  She views her aunt’s sexual incontinence with pragmatic understanding, if not with sympathy.  A young saxophone player (Dawid Ogrodnik) to whom they give a lift awakens her dormant sexuality, but she is under no illusions about him and the future he sketches out for her. Her spirited response to the banal existence that he offers her, as stifling in its own way as her life in the convent, is one of the film’s most satisfying moments.   There are only the briefest glimpses of Ida’s inner life, but whatever else religious life has done for her, it has made her entirely her own woman. Her own brand of independence and determination puts the truculence of her aunt into sharply negative contrast.

In the end, however, the protagonist of this film is neither Ida nor her aunt, devoured by suicidal despair since the war.  It is Poland itself, silent, bleak and haunted by its unacknowledged past.  Neither Communism nor Catholicism emerges the hero.  Both are screens behind which lurk the horror of collaboration with the Holocaust; both have shameful secrets of compromise and collusion.  The actions of the two women finally discovering the truth are strongly reminiscent of the women disciples at the tomb of Jesus.  But if there is resurrection here it is of the most muted kind, and it is clear that Poland has far to go before it arrives at Easter morning.  The truth sets both women free in glaringly contrasting ways.  Ida, at least, chooses life, whatever that may hold; and one has a sense that if she does return to religious life, it will be as a very different person with a very different agenda.

This is a gem of a work, acted with powerful nuance, filmed with breathtakingly restrained beauty, and intelligent about both its characters and its subject matters.  It beats The Flying Nun et al hands down.