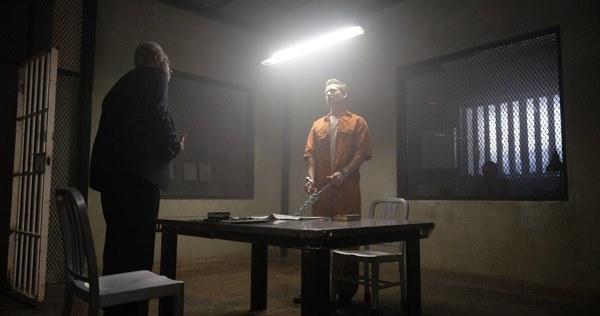 Karl Marx once said, ‘The first battlefield is the rewriting of history’. Directors of films that depict events of historical significance take on a great responsibility and some are masters of this trade, exercising their role with great sensitivity. I would put Roland Joffé into such a category. Having been nominated for two Oscars, for The Mission (about Jesuits in South America) and The Killing Fields (about the Khmer Rouge in Cambodia), he now adds a film about post-apartheid South Africa to his impressive canon. In The Forgiven, we see the truth and reconciliation process at work, and Joffé has made a very powerful film about forgiveness at a time when the world is sorely in need of it.

The screenplay by Michael Ashton is an adaptation of his own play, The Archbishop and the Antichrist, which focuses on the relationship between Archbishop Desmond Tutu (Forest Whitaker) and the fictional Piet Blomfeld (Eric Bana), a white supremacist who is in prison for the callous murder of a black girl, among other crimes. It is the job of the Truth and Reconciliation Commission, chaired by Archbishop Tutu, to get some closure for the grieving mother, Mrs Morobe (Thandi Makhubele). She has much less screen time than the two leads but Makhubele’s harrowing performance lingers in the mind for days. In a powerful appeal to Tutu at the beginning of the film, she asks him, ‘Just find me some bone’, so she can bury her daughter in peace. Her speech during a session of the Commission towards the end of the film ought to go down as a great cinematic moment: it represents the power of forgiveness, surely divine at this stage, which is a wonder to behold.  In a reflection at the end of The Forgiven’s world premiere, Joffé said that it is Makhubele’s character and her countless real-life counterparts who are the real stars of the drama.

It is a great credit to both Ashton and Joffé that the film does not run into the quicksand of some of the complications that hampered the commission.  Joffé admitted that they were realistic about the scope of the drama, that they knew they could not deal with the complexity of the period so they chose instead to offer a snapshot of it, through one case. The film was crafted tightly like origami, Joffé suggested, which, as it is unfolds, carries the audience along and reveals the many layers to the story without sacrificing the pace of the film.  A powerful performance from Bana helps, while Whitaker is slightly less convincing; film watching does involve some suspension of disbelief but I am not sure why they cast a 6’2” American actor to play the diminutive Tutu.  That aside, the scenes set in Pollsmoor Maximum Security Prison in Cape Town were particularly striking, helped by the casting of ex-prisoners and the decision to film in a working prison.  It takes a director of rare charisma and leadership skills to build sufficient trust for that to happen. To film in a prison is high risk, but it pays off here, to the equal credit of the actors. The gangs that effectively run the prison provided a sharp backdrop against which to explore the theme of redemption.

I found the dialogue gripping and, having worked briefly as a prison chaplain, it resonated with me. We can no doubt attribute some of the film’s authenticity to the fact that Michael Ashton himself was ‘inside’ for eighteen months after being convicted of fraud. In fact, he wrote The Archbishop and the Antichrist while he was in prison, which was itself a redeeming process.  Ashton talks gratefully about how the prison arts charity, the Koestler Trust, gave him an award for the play, claiming that this probably saved him from despair and thus saved his life.  Certainly, I left the cinema with a renewed hope, maybe even a little bit more likely to forgive. God works in mysterious ways.