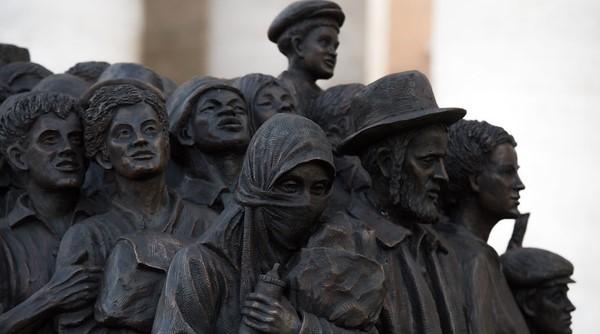 To a society that is becoming increasingly hostile to those in need of sanctuary, Pope Francis’ message for World Day of Migrants and Refugees on 25 September is strikingly countercultural. Sophie Cartwright of the Jesuit Refugee Service UK welcomes the hope and the challenges contained in the pope’s words.

In his message for the World Day of Migrants and Refugees 2022, Pope Francis urges us all to ‘Build the Future with Migrants and Refugees’ – that is, to strive with migrants and refugees in journeying towards and building the Kingdom of God. Francis is clear that the gates of this kingdom are open to everyone, especially to people who are marginalised and excluded, and therefore to migrants and refugees. His message invites us to see strangers as potential friends, rather than feeling threatened by them. It challenges us to think about our society and each other in fresh ways, to reshape it accordingly, and so to act in hope for a better world, in which those seeking sanctuary can find it.

At the heart of Francis’ message are two key ideas.

First, migrants, refugees and others forced to the periphery of present-day societies are at the beating heart of God’s Kingdom:

God’s plan is essentially inclusive and gives priority to those living on the existential peripheries. Among them are many migrants and refugees, displaced persons, and victims of trafficking. The Kingdom of God is to be built with them, for without them it would not be the Kingdom that God wants.

This echoes a recurring and central theme in Catholic Social Thought – that the common good is measured against the good of the most excluded and poorest. When thinking about whether something is a truly common good, we should think, ‘is this good for those at the bottom of the pile?’

Second, God’s Kingdom is both something that comes about eschatologically – that is, at the end of history – and, paradoxically, that can be present in the here and now in each of us (in this idea, Francis partakes in a rich and broad tradition recurring across the history of Christian thought in different forms). Although God’s Kingdom will only be fully present at the end of history, it is present now in a fragmented and partial way. Francis talks both of ‘journeying’ towards God’s Kingdom, and of ‘building’ it, and both are common endeavours.

As God’s Kingdom is our true home, we as human persons are in search of it, and we can only find it together. The societies and lives that we build now should lay foundations for God’s Kingdom. The call to build God’s Kingdom is significant here. It implies that God’s Kingdom can be either more or less present now, and in the future that we build. We must seek to bring about the kingdom, and we should measure our personal, social and political realities with reference to it.

So, God’s Kingdom is an inclusive one where people on the outside shall have ‘priority’, and where migrants and refugees are correspondingly at the centre; and our present societies should be seen in light of the kingdom that is to come, and therefore judged by how well they reflect and prepare for it. Taken together, these ideas imply that our proximity to God’s Kingdom is to be measured partly by the place of migrants and refugees within our societies, just as the common good is to be measured against the good of those on the margins.

Francis offers a radically inclusive vision of God’s Kingdom, and correspondingly of human community in history: that is, he offers a vision of God’s Kingdom and therefore of a potentially near future that we can and should all build together. Francis’ vision of God’s Kingdom, and its relation to our own society, is profoundly countercultural. If proximity to God’s Kingdom requires including migrants and refugees, our society falls painfully short: the passage of the Nationality and Borders Act, the plan to banish people seeking asylum to Rwanda, and the prospect of an expanded immigration detention estate all reflect a determination to punish and exclude the foreigner who asks us for sanctuary. We must do the opposite. The pope’s message is a call to transform a reality that excludes and builds walls into one of open gates, where the once-dispossessed and downtrodden are at the centre. We must, like the early Christians in the book of Acts, appear to be turning the world upside down (Acts 17:5-7).

The work of building the kingdom

Building the kingdom is an all-encompassing project, requiring every human person, and touching every layer of human life. It concretely seeks to bring about a more egalitarian society, eliminating ‘discrimination and inequality’; and it is an intense collective effort that operates both on an individual and a societal level. It requires both transformation of heart and widespread systemic transformation of our social, political and economic structures.

It is also an urgent work. The eschatological dimension to Francis’ message could seem to reduce the urgency of building the kingdom. The kingdom, after all, will come at the end of history, regardless. But this is not Francis’ perspective: ‘the future begins today, and it begins in each of us. We cannot leave to future generations the burden of responsibility for decisions that need to be made now’. The Kingdom of God is our homeland, and so our search for it cannot rest or wait.

Significantly, the kingdom’s citizens are its co-builders, with God, and those on the margins are especially key co-builders. One implication is that it is impossible for the powerful, on their own, to build a kingdom to include the powerless. Correspondingly, working for justice must take the form of solidarity. Those who find themselves relatively powerful must stand not only for, but with, those on the peripheries.

Francis cites the book of Isaiah, in which foreigners are ‘not invaders or destroyers, but willing labourers who rebuild the walls of the new Jerusalem’. This stands in a sharply uncomfortable contrast to the British government’s own rhetoric, which all too often vilifies people seeking sanctuary, portraying people crossing the channel in small dinghies as a threat to be kept out at all costs. We see again how countercultural is Francis’ vision of God’s Kingdom.

Hope in the face of tragedy and injustice

This radically inclusive, upside-down social vision offers a particular kind of challenge, and promises to be particularly fruitful, in a political context of both growing inequality and hostility towards refugees. In the face of gross human cruelty and suffering, it can begin to feel and appear as though there is nothing we can do. There is a vast temptation to despair. I have personally felt this temptation often over the last year, with the growth and development of anti-refugee laws and policies. The asylum system in the UK has gone from deeply hostile to more hostile still. The very foundations of refugee law are under threat. I have sometimes felt as though the progress of cruel and inhumane politics is inevitable.

In such a context, Francis’ vision helps us to imagine that a better world is possible, and so to keep fighting for it. And it does so without skating over the deep problems we face. We have already seen that building God’s Kingdom is not easy, in Francis’ eyes. Indeed, he is painfully conscious of how far we are from the Kingdom of God, and therefore of just how fully reality must be transformed to achieve it: ‘The tragedies of history remind us of how far we are from arriving at our goal, the new Jerusalem’.

This is a call not to lose hope, but to light a candle and march through the darkness. This is hope, but not necessarily optimism. We are called to have hope for the kingdom, and to strive for the kingdom, whilst acknowledging both the scale and the significance of tragedy and injustice around us. So Francis prays that we may all be ‘bearers of hope, so that where there is darkness…[God’s] light may shine, and where there is discouragement, confidence in the future may be reborn.’ Let’s join in that prayer.

The Gift of a Stranger: Forcibly Displaced People and Hope-Gifting