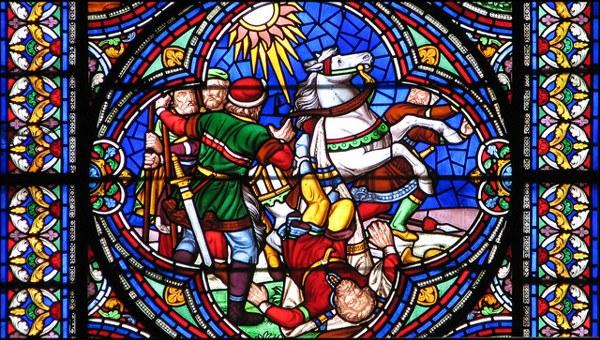 25 January marks the end of the Week of Prayer for Christian Unity, and it is also the day on which we remember the Conversion of St Paul. Alex Robertson tells us about his own conversion and his continued discernment of a vocation to the Religious Life. In doing so, he highlights some of the gifts to which Pope Francis asks us to be attentive during this Year of Consecrated Life.

On 26 January 2013, kneeling on the cold, hard and somewhat uncomfortable marble floor of Blackfriars Oxford, I was received into the Catholic Church. That day in some senses marked the end of one journey that had started six years earlier, but the beginning of another, as I started to pray again about my own vocation.

Unlike St Paul, I didn’t have any particular Damascus Road experience. I was brought up in an Anglican parish in rural Surrey and went to church fairly frequently. Things changed when I went to university in London: although I still went to church, I spent more and more time sitting at the back of Catholic churches. When I moved to Oxford to begin another degree I found an ideal home in Pusey House, an Anglo-Catholic chaplaincy that ministers to the entire University of Oxford. It was there that I really began to think about priesthood and, through a daily round of Morning and Evening Prayer and an early morning Eucharist, I began gradually to understand something of my own vocation. During the vacations, I spent my evenings sitting at the back of the conventual Mass next door at Blackfriars, and it was here that my conversion really began. After my time in Oxford, I went to work in three parishes in north London, and it was there that issues became more concrete and my difficulties with Anglicanism became far more obvious. At the end of my year as a pastoral assistant, I made the decision to become a Catholic and turned to the Dominicans for catechesis.

I’d spent most of the three years prior to that decision discerning a vocation to Anglican ministry and still felt called to priesthood; after all, the language I’d used to describe my sense of vocation as an Anglo-Catholic wasn’t that far off the language used by most Catholic seminarians and Religious. But something within me had changed. Any conversion has pushes and pulls: I was pushed away from the Church of England by some things, but also drawn to the Catholic Church by others. Any conversion to Catholicism can’t simply be based on controversies over parts of the Christian faith, at its heart it has to be a genuine conversion: a desire to live in closer union with Christ.

That desire was the change that happened in me, and while I struggled for the first few months while I was receiving catechesis and after I was received, my life gradually became more closely focused on God. With that focus came a desire to leave the world behind in a more radical and profound way. This was the moment when I first began to really consider the Religious Life, and I’ve spent the last two years discerning more deeply this sense of vocation.

Most people, when they find out that I’m going through the discernment process for the Religious Life, tend to ask something along the lines of ‘What?! You’re becoming a monk?!’ in pretty incredulous tones. And rather than explaining the minutiae of the development of the Religious Life in the Middle Ages, and that I would in fact be a friar, not a monk, generally I resign myself to ‘Yes, I hope so.’ Asked why, and I will usually say that I want to live a life that is centred on the love of God for me and for everyone, and freeing myself from the constraints of family, property and concern for my worldly destiny helps me to express that love to everyone in a stronger way than I could as a lay person or secular priest. This is an experience and desire shared by most discerning for the Religious Life, but over the past few months I’ve been trying to think more clearly about my reasons for pursuing this vocation as I move towards making an application to join an Order. My desire to become a Religious has a lot to do with heaven.

Heaven is a much-abused concept today. Most people in the secular world mock it as a milky, sentimental social construct designed either to keep the masses in their place by promising them a future life of luxury, or as something to help those of a more delicate emotional and mental constitution function in the everyday when they face the prospect of their own mortality. Within the Church it’s not much better. Some theological movements within the Church have tended to turn heaven into one of two things – a spiritual concept or a political construct. The first is found more within liberal Protestantism, where heaven, and therefore the Resurrection, becomes basically meaningless. Heaven is a spiritual, mystical place, and we don’t know what it looks like, and we don’t even really know what the Resurrection will look like, so it seems best to some to describe it in only the vaguest terms. On the other side, the politicisation of the idea of heaven or the Kingdom of Heaven is common to different denominations, but still continues to limit our understanding of the Hope that we have in Jesus Christ. It reduces the Good News to a few political ideas, and the message of Jesus to a transformation of society rather than a transformation of our entire selves so that we conform ourselves more closely to the life of Jesus.

This is where the Consecrated Life, and particularly a Religious Life lived in a community, comes in. I have never had and will, most likely, never have the experience of St Paul of the sky opening, being blinded by the light and hearing, as clear as the voice of the person next to me, the words of Jesus. My life will be far more run-of-the-mill, and I’ll continue to struggle in prayer and feel periods of desolation where God seems far away. But I’ll also still have those moments of joy where heaven isn’t just some construct or idea, but a lived reality. For me heaven is a place, something physical that I can grasp at, however blindly, through my everyday life. As I sit in Eucharistic Adoration each morning I’m sometimes not paying attention, or I fall asleep, or I start compiling a mental ‘to do’ list and sometimes even a shopping list, but I still usually manage to grasp something of that feeling of heaven I first got as an undergraduate going to Adoration at my local Catholic church for the first time. This feeling helps me know that this is where I belong, and that I want to start living that life of heaven as best I can now, on earth.

By living the life of heaven, a life freed from constraints, the Religious vocation can point constantly to something which is beyond us. When religious live the joy of their vocation in poverty, love of all people and obedience to the will of God, it’s possible to get some sense of the life we’re promised after we die. This, for me, is the key to why I want to live a life vowed to poverty, chastity and obedience: it allows me to live the life of heaven, now.

In Advent last year, we began the Year for Consecrated Life at the invitation of the Holy Father, who wants us to look afresh at the gift of Consecrated and Religious Life in the Church. This gift comes in a huge variety of forms of life: from hermits to apostolic sisters and brothers; from those who have consecrated their lives to God in a formal Religious Order, to those who live as Consecrated men and women in the world, attached to parish work or secular employment. All of these forms of life, so different in their daily expression, share one key idea: sacrifice. Consecrated men and women live in a way that participates in the sacrificial love of God, and through experiencing that love they are able to share it with others. This form of life is an immensely rich gift and one to which we should dedicate considerable reflection over the coming year.

Alex Robertson is Producer of Pray as you go.

‘She was much perplexed by his words’

Who was Saint Paul?

St Henry Morse SJ: ‘A saviour of life unto life’
Alfred Delp: committed to Christ
Ignatius and the Stars
‘The Fight Between Carnival and Lent’
Richard Attenborough: A life in pictures