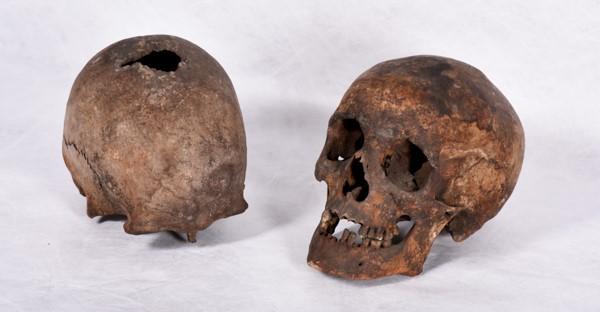 An online exhibition from the Jesuits in Britain Archives and Stonyhurst College Collections showcases relics of some of the English and Welsh Reformation Martyrs held in the British Jesuit Province collection. Thomas Flowers SJ celebrates the way in which ‘How Bleedeth Burning Love’ brings its viewers into the presence not just of the martyrs themselves but of those who were sustained by their witness.

The relics of the English and Welsh martyrs still speak. They tell the stories of people who died for their faith, and of those who have preserved the memory of such witness and prayed for the intercession of these saints. They speak of the agony of religious divisions and hatred within the Christian Church. They murmur of political plots and historical intrigue. They testify to the age-long desire of Catholics to touch holiness with their hands.

This complex human legacy, tinged with divine hues, lies at the heart of the new online exhibition of relics, ‘How Bleedeth Burning Love’, which provides a visual, audio and narrative experience of the relics housed at the British Jesuit Archives and Stonyhurst College, while placing them in their historical and religious context. Easily navigated and dipped into for just a few minutes or well over an hour, the exhibition provides a means to immerse oneself in the experience of English Catholic martyrdom since the Reformation.

The exhibit chronicles the stories of English and Welsh martyrs who lived and died in the sixteenth and seventeenth centuries. Organised into groups according to the years in which the various martyrs were canonised or beatified, the narratives include those of well-known saints such as St Thomas More and St Edmund Campion SJ, but also the lesser-known stories of, for example, St David Lewis SJ, St Oliver Plunkett and the Durham Martyrs. At times, the beautifully rendered photographs of relics and historical documents serve to enliven the accounts of the lives of the martyrs in question; at other moments, the relics themselves and their curious histories take centre stage, as with the history of Mary Queen of Scots’ Thorn (supposedly from the crown of thorns worn by Christ on the cross) and the case of the Holywell Bones, which, although unidentified, the exhibit suggests may be the relics of St Philip Evans SJ and St John Lloyd. The viewer has the option of listening to an audio track of each section or of perusing an identical text while scrolling through the images. This text is enriched with passages from the writings of the martyrs themselves or other contemporary accounts. For viewers less familiar with Catholic and Jesuit jargon, there is a helpful glossary of terms that can be consulted at any time. Few of the individual portions of the exhibition are necessarily linked to each other, so it can be easily enjoyed in small doses, and not necessarily in narrative order.

The images of the relics come vividly alive in well-executed photographs. The close-up photo of the scrap of St Edmund Campion’s coarse, green cloak almost feels rough against your skin, in a way it hardly could when seen in person, since it is such a small piece. So, too, the gruesomeness of the Holywell Bones is eloquent, with skulls that show the marks of the brutal death to which these martyrs were subjected. On the other hand, rather than seeming ghoulish, the pairing of a small piece of St Robert Southwell SJ’s bone with a handwritten text of a poem of his on penitence and salvation testifies to the flesh and blood reality of a Jesuit who both composed beautiful poetry and suffered a cruel death.

The account of the trunk of St Edmund Arrowsmith SJ offers a particularly good example of the way this exhibition uses artefacts to narrate history. After summarising basic biographical data about Arrowsmith and his clandestine ministry on horseback to Catholic families throughout Lancashire in the early seventeenth century, the exhibit offers photos of a trunk with which he used to travel and its contents. Starting with an image of the closed trunk, the exhibit unpacks its contents, displaying the simple tools of Arrowsmith’s priestly ministry, including his chalice, altar cloths and liturgical vestments. A linen bonnet was also found within the trunk, which historians speculate was there to cover the liturgical items, and thus served as an attempt to make the contents of the trunk seem innocuous at a time when a Catholic priest could be arrested and executed simply for being a priest. That Arrowsmith was, in fact, executed because he was turned into the authorities for profit by people to whom he had ministered makes such a facile attempt at concealment rather chilling.

The treatment of Mary Queen of Scots’ Thorn demonstrates another of the exhibition’s strengths: its ability to combine respect for Catholic devotion with good scholarly analysis. In great detail, the narrative in this section traces the supposed relic of the crown of thorns worn by Jesus on the cross from its purported origins when discovered in the fourth century (among other relics) by St Helena, the mother of the Emperor Constantine, to its passing into the keeping of the Society of Jesus. Along the way, the story is told of Mary Queen of Scots, who received the thorn in connection with her marriage to Francois, son of the king of France, and who eventually gave the thorn to Blessed Thomas Percy, Earl of Northumberland. Percy was executed in 1572 by the English Crown after refusing to renounce his Catholic faith. The narrative keeps close to historical facts, and makes clear where the accounts of the thorn’s origins and handing on from person to person are based on solid evidence and where they are unverifiable. In this, the exhibition offers an excellent introduction into the sometimes baffling world of Catholic relics, mixed as so many relics are with legends that seem fantastical today, even to many believers. Yet the exhibition maintains a respectful tone towards the faith of all parties involved and makes clear the historical and religious significance of these artefacts.

In the end, the exhibition is both a lovely invitation to those curious about the English and Welsh martyrs, who might want to know more of their stories and the world of Catholic relics; and also a rich way to engage with these relics and artefacts for those who have religious or historical devotion to them. Those who put together this exhibition clearly realised that their task was to allow these relics to speak, and they have succeeded well.

Thomas Flowers SJ is a member of the USA West Jesuit Province and is studying for a PhD in Jesuit History at the University of York.

Visit the exhibition at jesuitcollections.org.uk/relics

Discernment in a time of tribulation: Pope Francis and the Church in Chile