Skip to main content
Photo by Paul at flickr.com 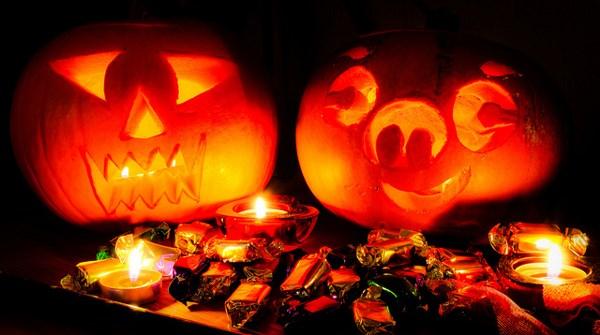 How has an ancient custom of asking for soul cakes for the repose of the dead morphed into a secular quest for sugary treats? And when did the tradition of dressing up as ghosts and ghouls on 31 October make way for Freddie Krueger or even Miley Cyrus costumes? Jonathan Lomas traces the cultural evolution of contemporary Halloween festivities in Britain and North America. Do modern celebrations make any nods to the festival’s origins?

Halloween or Hallowe’en? Even the variations in the spelling of the name of this festival illustrate how our regard for the night of 31 October, once known as All Hallows’ Even, has changed.

My son has just started life at one of the many schools named All Saints’ (with an apostrophe), and I once lived on the same All Saints Road (without an apostrophe) after which the Notting Hill-based girl group named themselves. Despite the girls scoring a few number one hits in the 90s, All Saints’ Day has never seemed to gain as much cultural capital in the UK as Halloween. Other cultures might view 1 November as a time to pay respectful visits to the graves of their loved ones, but it is the less hallowed aspects of Halloween which appeal to many British children.

Until the recent past, there existed a strong connection between the celebrations of this ancient festival and its supernaturally-oriented origins. Agatha Christie’s 1969 ‘whodunnit’, Halloween Party, might have best captured the familiar British traditions, those of dressing up and playing games at a house party (though the fact that one of the guests is drowned whilst bobbing for apples may have predicted the murderous direction in which this festival was heading). This mystery made a brief nod to the concerns of the 1960s – troublesome teens, the abolition of capital punishment, and Christie’s first recorded use of the word ‘lesbian’ – but otherwise it presents an England little-changed since the 1940s, including in its Halloween traditions. For most children of the post-war period, it was still an opportunity to explore ideas about death and the afterlife in an increasingly secular society, by dressing up as ghosts and telling each other spooky stories: this suggested at least a visceral recognition that it was still an act of remembering the spirits of those who had died. Some people might have disapproved of the festival’s occult associations, but at least it meant that the supernatural concerns remained culturally relevant, even if the Devil still had the best costumes.

Even critics of more traditional Halloween celebrations, who believed that these were encouraging in our children an unhealthy interest in the occult, might now be beginning to wish that there were a few more witches and white-sheeted ghosts roaming our streets. Based on Google searches for Halloween costumes in 2013, it would appear that supernatural fancy dress has been marginalised by its secular cousins: television, film, viral videos on YouTube, computer games and pop stars seem to have been a major influence on contemporary dressing-up boxes. Last year, Miley Cyrus outfits, Minecraft-style cubes and Breaking Bad costumes were among the more popular choices for Halloween revellers. So why has Halloween become almost as secular a holiday for some people as Christmas and Easter?

Personally, I blame Halloween – by which I mean the John Carpenter film of 1978. This independently-produced film, which also introduced Jamie Lee Curtis to the world (coincidentally, her mother starred in Psycho, to which this film owes a debt), became the box office sensation of the year and created a new genre: the ‘slasher’ movie, in which teenagers are hunted by serial killers in American suburbia.  This type of film combines the thriller and horror genres with a liberal amount of graphic violence and is therefore very appealing to young people who love being scared out of their wits.

The original Halloween film (seven sequels were made, as well as a remake and a sequel to the remake) is not the worst offender in terms of gratuitous violence, and is well-regarded by some film critics. Some have even gone so far as to regard it as a twist on the morality play, as the killer (one Michael Myers, a popular choice for fancy dress costumes) attacks teenagers who have turned away from wholesome American values. The film, though, led to a slew of others in the same vein, including the ‘A Nightmare on Elm Street’ series, the ‘Friday the Thirteenth’ stable and the ‘Scream’ parodies, which became increasingly violent and introduced a generation of young Britons to a darker underbelly of small-town America.

As Britain was taken over by the home-video boom of the 1980s, these movies and their depiction of suburban life had a huge cultural influence on these shores. British children, who were once content to take their rite-of-passage thrills and scares from more traditional ghost stories, found the castles and forests of Europe being replaced by the white picket fences and tree-lined boulevards of American suburbs. The popularity among young people of many of these low budget and straight-to-video slasher films was in part a rebellious response to the moral panic they engendered in their guardians. In the swift passing of the Video Recordings Act 1984, there was even an echo of the introduction of the Children and Young Persons (Harmful Publications) Act of 1955; the latter was passed hastily in response to the American horror comics of the post-war years.

Ghosts and goblins were now for infants; any adolescent who wanted to be seen as cool had to take their horror cues from Hollywood.   Freddie Krueger, the serial killer from the ‘A Nightmare on Elm Street’ films was quickly added to the repertoire of Halloween costumes, to be followed in later years by the killer of the ‘Scream’ franchise, whose appearance presented an ironic twist on the Grim Reaper. In the 1990s, The Simpsons first aired on British television and their Halloween-themed ‘Treehouse of Horror’ episodes soon became staples of the show; their 25th Halloween special aired this October.

Yet there has been resistance to these North American traditions. As British children were being exposed to evermore American cultural memes, Stephen Fry and Hugh Laurie performed a sketch in 1990 in which the two of them berate a pair of trick-or-treaters for daring to affront them with this foreign custom (though of course Mr Laurie would go on to become one of the most successful television stars in the States…).  And writing in 2007, the BBC journalist Sean Coughlan deplored the impact of these American incursions on our traditions, referring to Halloween as ‘the Japanese knotweed of festivals’ in an article in which he also cites the 1980s as a time when these cultural changes began to take hold.

And yet are the changes as alien as all that? Take the example of trick-or-treating: it may have come back across the Atlantic in post-War years thanks to the dominance of American culture, but it seems as if the custom was carried over to the States originally by settlers of Scots descent. Its current format is probably a development of the Celtic tradition of ‘guising’, which dates back to when the Celtic calendar ended with the festival of Samhain, a celebration which the newly-converted Scots then incorporated into their own All Saints’ Day celebrations. One of the elements of ‘guising’ was the practice of children going from house to house, asking for soul cakes or gifts for the departed, an ancient custom which was also known in Britain as ‘souling’.  Shakespeare alludes to the tradition in his 1590s comedy, The Two Gentlemen of Verona. Speed the Clown says his love-struck master Valentine has learnt ‘to speak puling, like a beggar at Hallowmas’ – and given that the preceding description of Valentine’s love-sickness is that he has also learnt ‘to watch like one that fears robbing’, then readers might suspect that the Bard enjoyed considerable foresight in describing modern day householders’ responses to trick-or-treaters.

It is a pity that some of the innocence of the custom’s origins has been lost in translation. It is now the norm for groups of children to come to your door demanding not soul cakes for the repose of the dead, but sugary sweets to hasten their own demise. This practice, like the other contemporary observances of Halloween, is far-removed from the celebrations described in Robert Burns’ poem ‘Halloween’ (1785), in which his revellers depart in to the night having enjoyed just a few games and jokes, but at a reasonable cost:

Wi’ merry sangs, an’ friendly cracks,
I wat they did na weary;
And unco tales, an’ funnie jokes-
Their sports were cheap an’ cheery:

The good economic sense of Burns’ ‘cheap an’ cheery’ revellers would no doubt cause them to baulk at the estimated 6-7 billion dollars that Americans will spend on Halloween celebrations this year. The commercialisation of this festival is an indication of the significant shift in its meaning in North America and the UK: a celebration to remember the dead seems more about eating, drinking and being merry to modern eyes.  In other countries such as Portugal, where the custom of going door-to-door is known as Pão-por-Deus, the children will simply mutter darkly about an ungenerous householder gaining no repose for the souls of their departed. At least that custom still carries in it the idea that the act of giving might serve to earn a blessing for the dead; it is not simply an imperious demand for sugary treats, but an implied recognition that this was once a festival with religious significance.

I am sure some people will think I am being a grouch (or quite possibly a Grinch), claiming that we have always had a tradition in this country of carnival, where the power relationship between rich and poor, old and young, is reversed for a day, and that trick-or-treat is just another version of that carnival-esque spirit. And yet when there is a trio of teenagers at my door this year dressed as Miley Cyrus, Freddie Krueger and some other cultural reference point I am never going to get, forgive me if I appear to be out. However, if I do see any witches or ghosts (or even better still a child dressed as a Dalek), I might just have a packet of mint imperials in the cupboard…

Jonathan P. Lomas is a teacher and the author of Whodunnit, a murder mystery set in the world of Doctor Who fandom.

‘The Fight Between Carnival and Lent’