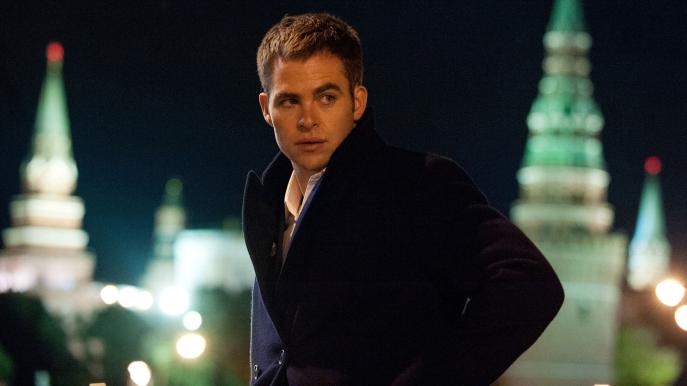 A young idealist, with illusions of heroic grandeur, sustains life-threatening injuries on the battlefield. This leads him down the path of a painfully slow recovery: he must recuperate and learn to walk again; he must also look deep within himself to discover what it is that truly drives him. Faith, it transpires, can save a soul.

So begins Jack Ryan: Shadow Recruit. But you would be forgiven for thinking this sounds familiar, since this film has a subtle but tangible Ignatian sensibility to it. While I doubt that ‘AMDG’ was inscribed at the top of each page of the script, there are undoubtedly a few parallels with Jesuit spirituality. According to Tom Clancy’s books, the lead character from Clear and Present Danger and Patriot Games whose early days this film explores was educated by Jesuits. It should be no surprise, therefore, that many Ignatian themes emerge.

This film could easily have been called Jack Ryan: An Education, such is the steep learning curve on which Ryan, played by a thoughtful Chris Pine, embarks. The youngest screen incarnation of this character to date is directed by Kenneth Branagh, who brings a meditative approach to the origin story that is so popular with film franchises these days. There is a genuine process of discernment at the heart of Ryan’s story; his allegiance to the cause of his country is weighed against his personal life.

The film begins in the shade of 9/11, with Ryan studying economics in London. As a result of the terrorist attacks, Ryan rushes into the military with youthful gusto. There is something different about him, compared to most of the other Marines he serves with – he is highly educated and has a studious mind. Ultimately, however, he needs to re-evaluate his nationalistic, military instincts in light of the very real possibility he may never be able to walk again; the perils of active duty in war.

During his recuperation, Ryan meets Cathy, a pretty trainee doctor (played by Keira Knightley), who pushes him to work hard at his recovery. At the same time, an older mentor, Thomas Harper (Kevin Costner) casts his eye over Ryan, weighing up the possibility of recruiting him for work within the CIA. Ryan searches his soul and eventually finds his inner strength; his subsequent calling to the CIA gives him the opportunity to serve a cause in which he truly believes. However, it also forces him to keep a great secret from his partner, the now-qualified Cathy.

From here, Ryan is catapulted into a world of international terrorism, corporate espionage and counter-intelligence. He uses his cover as a financial analyst at a private Wall Street firm to expose a sinister Russian plot to collapse the US economy and conduct a violent terrorist attack on US soil. Thrust into action to save the day, Ryan travels to Russia and is soon plunged from number-crunching analysis into full CIA field operation. At the same time, his relationship is put in jeopardy as Cathy begins to suspect that all is not as it seems.

If this does not sound as action-packed as a Bond film, for instance, then that is because it is not. This film has designs on being a more studied kind of thriller. Branagh is not necessarily known for directing this type of film; he has been preoccupied with Shakespearean adaptations for a large portion of his career. But since this is not a typical action film, Irishman Branagh is actually the appropriate director. Indeed, he may well be the only major director working today who would have the temerity to cast Kenneth Branagh as the main Russian villain in a contemporary blockbuster.

While Branagh’s Viktor Cherevin is a fairly simple portrayal of an ageing, militarised Russian hell-bent on vengeance, he works as a nice foil to Pine’s Ryan. Ryan’s youth and inexperience compared to his foe are supplemented by his meticulous attention to detail; Ryan would rather out-smart than out-punch his enemy.

Yes, there are car chases. Yes, there is some close-quarters combat. But at the heart of Jack Ryan: Shadow Recruit there is also a man yearning for a greater purpose, trying to sift through the propaganda to live the life he wants to lead.  Ryan yearns for the ability to be open with his fiancée, to expose the frailties within himself. He is willing to accept the risks and vulnerabilities that come with being true to his calling. And it is these traits, rather than fighting dirty or pursuing underhanded tactics, that mark Jack Ryan as an interesting character. It is not just his formal education that was Jesuit; there are signs that his professional and private lives are also infused with Ignatian influence.