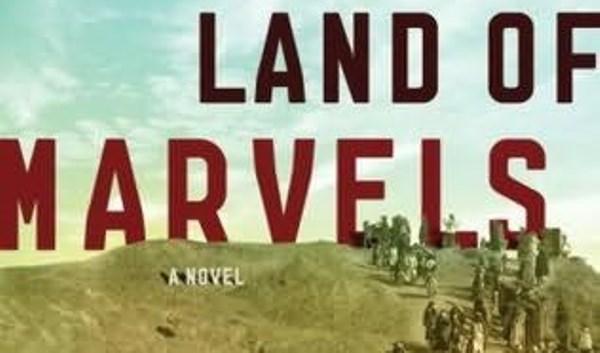 ‘What goes wrong when human beings set themselves up as kings and claim to bring order out of chaos? The Old Testament has plenty to say about that. And so does Unsworth’s novel.’ Karen Eliasen highlights the acute contemporary relevance of a novel set in Mesopotamia at the beginning of the First World War. You really must read Land of Marvels by Booker Prize-winning author Barry Unsworth.

It was as a keen student of the Old Testament that I found myself first noticing and then reading Barry Unsworth’s 2009 novel Land of Marvels. With its 1914 Mesopotamian setting that allowed for narrative forays into a royal Assyrian past, the novel, I felt, was bound to appeal to my taste for the solid Old Testament themes of kings and wars and deserts. I was not disappointed. Land of Marvels proved to be a spicy combination of history and thriller that made me want to learn more – about the great and ruthless kings of ancient Assyria, about events leading up to the British Mandate in post-WWI Mesopotamia, and about the current jihadist  takeovers in Iraq. These days such wants to learn more are easily satisfied: reading Land of Marvels quickly became a two-hand affair, one to hold my Kindle and the other my Internet-connected tablet.

The better historical novels inspire us in just this way, and at their very best they seduce us into paying attention to our own immediate times. Land of Marvels seems to make no secret of such seductive intentions. From its opening paragraphs describing a partly-excavated tell – ‘this ancient heap of earth and rock and rubble, gashed and trenched for no purpose immediately apparent’ –  to its final ominous words – ‘this vast territory, which had never been home to a single nation, she was to rename Iraq’ – this novel wants the reader to pay attention and make connections. Or at least to get excited and ponder connections: Assyrian kings and British Mandates and modern jihadists  … what is it about this particular crescent of land that lends it to such political vehemence?  It may not be for nothing that this is the same crescent of land we readily associate with the ‘cradle of civilization,’ which is how I arrive back at those solid Old Testament themes of kings and wars and deserts.

Engrossed as I became in this multi-layered subject matter expanding out from 1914 and the Arab world, it did not take me long to reconnect with David Lean’s very fine1962 film, Lawrence of Arabia. This film, like the Unsworth novel, interweaves clashing European and Arab interests with the struggles of a dying Ottoman Turkish empire in an ancient desert land about to be catapulted into a new phase of history through World War I. Anyone familiar with Lawrence of Arabia probably remembers Alec Guinness’ heavily made-up turn as Prince Faisal, the Arab leader in league with the British to fight the Ottoman Turks. And they may remember the equally heavily made-up accent appraising Lawrence when the two first meet: ‘I think you are another of these desert-loving English!’ This appraisal is set within a brief but focussed exchange about the relationship between the British Empire and the Arab world, in which Faisal repeats an accusation that Lawrence has earlier levelled at the Arabs: ‘Or is it that you think we are something you can play with? Because we are a little people; a silly people; greedy, and barbarous, and cruel.’  As so often happens in big serious stories, tables are turned to make us question just who is greedy, and barbarous, and cruel.

These are the sorts of tables that are also turned in Land of Marvels, which has as its hero one of ‘these desert-loving English’ looking for fame and glory, this time as an archaeologist digging up a tell that just might contain the tomb of the last of the Assyrian kings. Not a little or silly people, these Assyrians, but certainly greedy and barbarous and cruel, as anyone who has had a good look at the Assyrian rooms in the British Museum in London must conclude. There, huge chiselled stone slabs depict, one after the other, kings and soldiers passionately engaged in the brutal business of war and conquest. But the inscriptions on the stones also make a claim on behalf of the kings about the purpose of this brutal business of war and conquest: it is to bring law and order – peace – to the kingdom. This is of course the recognisable stuff of which the creation myths of the Ancient Near East are made, paralleled in the Old Testament in Yahweh the creator who is king, and who in that capacity brings order into being out of the waters of chaos. So what goes wrong when human beings set themselves up as kings and claim to bring order out of chaos? The Old Testament has plenty to say about that. And so does Unsworth’s novel.

What his novel makes clear is not only the ludicrousness of such rhetorical posturing that supports the use of war and conquest in the service of greed, but also its ubiquity across time and cultures. It applies to all and to everywhere. The behaviour is greedy and violent, the rhetoric is noble and civilizing, and meanwhile it is chaos rather than order that prevails. ‘Iraq’ prophetically appears as the novel’s last word, and it ends a paragraph briefly describing the Sykes-Picot Agreement made secretly in 1916 between the British and the French on how to divide up the disintegrating Ottoman Empire. The borders ‘drawn in the sand’ at that time eventually came to define modern Syria and Iraq, although those borders had nothing to do with the Arab peoples living there and everything to do with the European peoples’ greed for oil. Oil – its discovery, its geology, its blessings and dangers – plays a key role in the novel’s narrative adventure, giving us all the more reason to sit up and take notice of how war and oil and Iraqi borders mingle into a potentially explosive mix. Mesopotamia – its ancient past and its foreboding future: ‘Take notice!’ says Unsworth.

We might oblige by taking fuller notice of that English-French agreement. There is a scene included in Lawrence of Arabia that mentions the border-making Sykes-Picot Agreement. It is secret, yet the calmly astute Prince Faisal knows of it and the shocked Lawrence does not.  The real historical Lawrence soon enough came to the conclusion that, ‘We have appropriated too many Moslem countries for them to have any real trust in our disinterestedness.’[i] But in retrospect, the Agreement is not just some interesting titbit of embarrassing imperialist history referred to in novels and films. The Sykes-Picot Agreement has most recently (only a few weeks ago) turned up in the rhetoric of ISIS, the extremist jihadist group now encroaching upon those same desert lands in Syria and Iraq. The group has just released an English-speaking video entitled ‘The End of the Sykes-Picot Agreement’ in which it announces its intention to eliminate by force all the borders set after WWI for the convenience of Europeans. Whether or not ‘lines drawn in the sand’ almost a hundred years ago are still having such far-reaching consequences in the Middle East may be up for debate; but how ISIS wants to present itself is in a long line of noble, kingly purpose. Those who want to unearth the many facets of this kingship and the wars waged in its name in this desert land will find much to ponder in Land of Marvels.

[i] A recent excellent biography of that real Lawrence, whom I went on to after watching the film, and from which this quote comes, is Lawrence in Arabia: War, Deceit, Imperial Folly and the Making of the Modern Middle East  by Scott Anderson (Atlantic Books 2014). For those gripped by this time and place, another very good (I jumped on a real roll here) recent biography is Ali Allawi’s Faisal I of Iraq (Yale University Press 2014)

Faith in the Old Testament