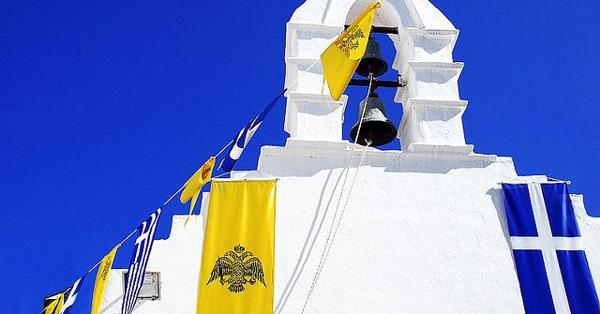 The Orthodox Church in Greece has responded to the country’s economic crisis with pastoral support of those most in need, but this has not been accompanied by ‘social teaching’, as one might expect. Theodore Kodidis SJ asks what such a contribution could achieve in a country that needs theological and spiritual light in its current darkness.

In recent months, I have been asked many times by friends in other countries, ‘What is going on in Greece?’ The question is sometimes more specific: ‘How has the Orthodox Church reacted to the crisis that has hit Greece?’ It is fairly easy to give a superficial reaction to that question, but I must admit that it is not easy to formulate a balanced and precise answer. I usually emphasise that the Orthodox Church has been trying at all levels to bring help to the many who are deprived of the necessities of life and who are suffering through unemployment or lack of security. However, as far as I know, the Church has offered no theological instruction about the social issues to which they are responding in practice. There is nothing that corresponds to what is known in many countries as ‘the social teaching of the Church’, which would provide an analysis of the social problems that are affecting Greek society and perhaps suggestions of how to alleviate the suffering. In the tradition of the Orthodox Church, I tell people, such questions are considered to be in the competence of the lay members and institutions; the Church as a body does not want to intervene in the arena of political and social problems. However, when I consider this in more depth, it seems to me that there is in fact a place for the Church to express a viewpoint grounded in its spiritual tradition. The economic problem that our country is currently experiencing, with poverty and rising unemployment, has political, social and ethical dimensions, as everybody recognises. But it also has a spiritual dimension, which we cannot neglect if we are to face up to the crisis. Any reflections on the spiritual roots of the crisis that I have come across are limited in range; they lack impact and therefore do not receive the attention that should be given to the wisdom that the Orthodox Church has to offer to the Greek faithful. This wisdom is sorely needed. Over many years, we have all – those who govern and those who are governed – grown accustomed to sweeping problems under the carpet and then acting as if what we cannot see does not exist. This indicates that there has been a real problem in our relationship with truth and reality, and consequently in our relationship with our fellow men. Truthfulness has been lacking and therefore we have become pretentious. This is a spiritual problem. We have lived in recent years in considerable opulence, but it was not based on work and productivity. As a result, we became superficial and irresponsible. It also led to our being conceited, as we recall the arrogance with which we treated the economic refugees fleeing Communist regimes in the eastern bloc. Additionally, Greek society is deeply divided in a way that I have not seen in any other European country. There are the pro-Europeans in the centre; the Marxists and Communists; and the right-wing nationalists: any collaboration or understanding between these three groups appears to be out of the question. The irresolvable opposition between the pro-Western and the anti-Western tendencies that has always been a feature of Greek history now takes on new forms.  These contradictions deep in our communal psyche manifest themselves as problems in our society. At this moment the intervention of the Church could be crucial – to enlighten, to direct, to call to repentance, and to give hope and ambition in this crisis. It will not be an easy task, especially given that the Orthodox Church has struggled to show such leadership at certain times over the last twenty years, for example during the break-up of Yugoslavia and the debate about the inclusion of religious affiliation on identity cards. Today the Orthodox Church should do what it did not do in either of those situations and produce a theological reflection which would present the thinking of the Church and call the faithful to action. There is a need for theological and spiritual light in today's darkness. We are caught in the midst of overwhelming social problems and the shallowness of most of the political and sociological talk that surrounds us is terrifying. It is the duty of the Orthodox Church to stand by the Greek people and to help them find solutions to the needs of today.  Theodore Kodidis SJ is Editor of Anoichtoi Orizontes, the journal of the Jesuits in Greece.

Will There Be Faith?: A New Vision for Educating and Growing Disciples