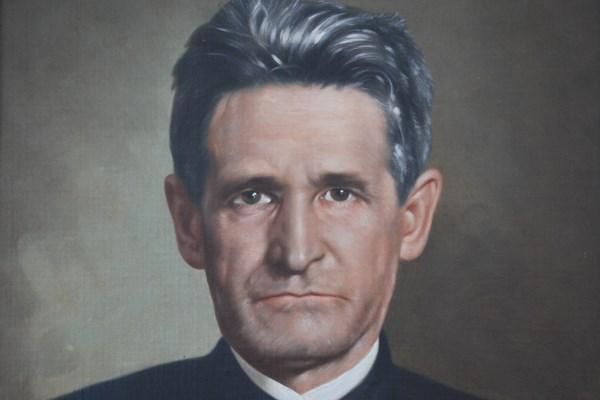 ‘Every soldier needs to know that in his chaplain he has his most faithful friend, always willing to help, and who will never let him down.’ Thinking Faith marks Armistice Day 2014 by reproducing a description of ‘the duties of a priest in the field’ given by Blessed Rupert Mayer, a German Jesuit who served as an army chaplain during World War I.

Blessed Rupert Mayer (1876-1945), the featured Jesuit for November in the 2014 calendar produced by the Jesuits in Britain, is best known for his outspoken resistance to Nazism. This resistance was all the more effective because of Mayer’s successful pastoral projects in Munich, and his reputation as having been a heroic army chaplain during World War I. He enlisted in the first days of the war, serving until being shot in December 1916 and losing his leg. His heroism was well documented, and he was the first Catholic chaplain to win the Iron Cross.

The historian of his regiment noted, ‘Fr Rupert knew just when things were getting too much for simple people, but could also find a roundabout way of reaching men who had become hard-boiled and shut off. And this route — eased by his golden humour — led through the inexhaustible reserves of his gifts of kindness, which he often — even when heavily burdened — brought in person to the furthest listening post at the head of the trench.’

The following notes were prepared by Mayer for a talk that he gave at a conference on pastoral care in Munich in April 1918. These notes — sketchy as they are — bear interesting comparison with what we know of his counterparts from the British and Irish provinces.

It’s striking how differently individual army chaplains understand the duties of a priest in the field. There are some, for example, who have no idea what a tremendous opportunity can open up for them on the front line during battle, and what a huge influence this activity can give them both among officers and among men in the ranks. Thus people’s senses of the qualities needed in an army chaplain are very different.

Among big city populations under the influence of socialism, there is a massive distrust of priests. They think he’s a man who preaches, who says mass, who in short does his job — but in order to earn money. People see more or less everything else as a means to this end. And so everything depends on proving to people by your deeds that you are rock solid in your convictions about what you represent, that you are not looking for any temporal gain from what you do, but that you are letting yourself be motivated by eternal, supernatural considerations. Thus in the field too, you have to show you are in deadly earnest about your faith in divine providence, about loyalty unto death in doing your duty, about the practice of Christian love of neighbour, and about the Pauline ‘being all things to all men’ to the point of complete self-sacrifice.

Yet, for the military chaplain, nothing is easier than this. It’s quite common for him to have this chance every day, and sometimes indeed not just once. This makes it relatively easy for the army chaplain to overcome the main prejudice that many groups of people have about him, and to exercise his vocation successfully, in a way that is hardly possible back home.

I’m going to talk a bit now about particular features of character and behaviour.

The army chaplain should not be too old, and he should not be too young. A man who is too old lacks the mobility and flexibility that are vitally necessary. A man who is too young will find it difficult to command the respect he needs, especially from officers — quite apart from his lack of experience. The army chaplain must be in very good health, or else he will not stand up to the stress; and he must have good nerves. Even in the most critical situations, his nerves mustn’t fail him. It would have been better if from the beginning army chaplains hadn’t had beards.

If he knows what he is doing on horseback, that’s an advantage, because the horse is the most secure way of getting around the battlefield.  But it’s never a matter of riding for fun -- riding must remain always a means to an end. If the army chaplain has something of a military bearing, that will make life easier for him. But he must be careful not to stand on his dignity as an officer. He must never forget that he is in the campaign not to be served but to serve.

The army chaplain should be a man of the world. If he masters the external conventions, he can present himself with confidence. People will think of him as someone who knows what he is doing and is up to the job. Clerical decorum isn’t the only thing he needs, but he certainly does need it. Otherwise he is in great danger of staying at the external level — a parlour priest. That really mustn’t happen. Nor must there be anything immature or stuck-up about him.

The army chaplain needs tact — a great deal of tact in his dealings with the officers, whom he is with day and night: tact in what he says at funerals and in sermons, in maintaining the integrity of his position, in his relationships with Protestant colleagues, in evaluating what he himself is doing. He must never forget what is demanded as a matter of course from every officer at the Front — notably the commanders — and indeed every soldier. Tact will prevent him from being ambitious for decorations. Tact also shows the chaplain where the middle course lies in cases where it is a question of standing up for the interests of the officers and the men.

You need to be well-educated, because often people discuss a whole range of questions. But book-learning is less important than common sense, and a good practical feel for how to organize and prepare services, for how to make the Sacraments available, and for how in general to go about ministry in battle. A chaplain can make a lot of trouble for himself if, for example, he is not on the lookout, and uses paths that are being watched over by the Enemy. This practical feel comes out especially in sermons.

The army chaplain needs to be moderate in food and drink. He is a servant of the religion of the Cross, and he can’t be that if he lets himself go in this respect. The temptation here can be quite strong after serious dangers and heavy deprivations. But he mustn’t yield to it — otherwise he will, sitting at table, knock down with one stroke everything he has otherwise been working so hard to build up. Of course he can and must attend the occasional formal dinner, but he must keep a firm grip. And if restless zeal is what marks him out, he won’t easily stand on ceremony. He must be careful with his time, otherwise he’ll never manage all the different sorts of things he has to do.

If he wants to do his job properly and thus do a lot of one-to-one work (that’s the central thing in army chaplaincy), he’ll be the busiest man on the Front. When the troops are on duty, he has an enormous job in getting to know every position, every trench, every dugout, every listening-post, every bunker, every lookout, so as to be in permanent touch with every man. When the troops are off duty, there’s all the more for the chaplain to do. He has to know where each battalion is quartered; to fix up and to celebrate the services; to organize the sacraments; to know where each company, each platoon, each squad is holed up; to get to know all the different areas; to meet people etc. Restless zeal, rather than useless fuss, is also the best way of countering the prejudice of an onlooker that the chaplain is superfluous. Restless zeal, day after day, month after month, and avoiding anything smelling of comfort — in the end even those whom religion leaves cold will be forced to respect that.

The army chaplain needs a warm heart, one that mucks in, one that is ready for any sacrifice. That’s the only way he can be, within the possibilities of human weakness, all things to all men — or better, all things to each man. Every soldier needs to know that in his chaplain he has his most faithful friend, always willing to help, and who will never let him down. As the chaplain moves round the battlefield, or the headquarters, or the different areas, he should never be empty-handed if he can possibly avoid it. Children say that whoever gives them something is their friend. That applies here too …

What a lot a chaplain on the front line can do to protect — and that means saving their lives — comrades who are wounded or crushed! Soldiers will never forget that about him.

Of course all this is possible only if the chaplain has a rock-solid basis in the Catholic faith, and if he is making a serious effort to lead a well-grounded inner life. For the army chaplain too, that’s what’s at the heart — that’s what should be his guiding star.

To find out more about Blessed Rupert Mayer SJ, visit the online 2014 calendar of the Jesuits in Britain at www.jesuit.org.uk/calendar2014

'Testament of Youth' by Vera Brittain