Skip to main content
Photo by Paul Weaver at flickr.com 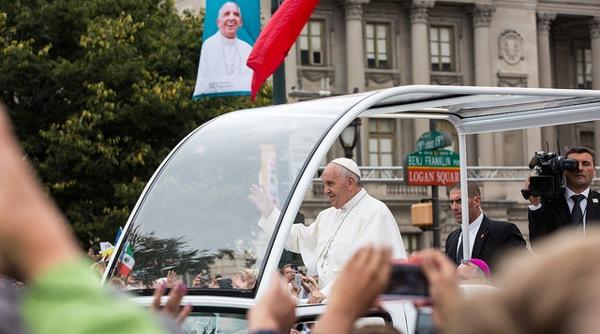 In recent decades, the dynamics within the Catholic Church in America have grown increasingly to resemble those that define the U.S. political scene, writes Vincent Rougeau. Pope Francis’ refusal to align himself with either liberals or conservatives on his recent visit was a challenge to all those who accept such divisions, inside and outside of the Church.

A five-year-old girl breaking through security to offer Pope Francis a letter and a t-shirt was probably the most iconic image of Pope Francis’ visit to the United States. Beckoned forward by the Holy Father during his parade in Washington, she was lifted into his arms by security agents to receive kisses and a blessing. Actually, the moment was not purely spontaneous. It had been orchestrated by immigrants’ rights groups to bring attention to the plight of the more than 11 million undocumented migrants (including the little girl’s parents) living in the United States illegally. Nevertheless, the pope’s dramatic response to the child’s attempt to meet him was one of many times during his visit when his words and actions drew powerfully from the examples of Jesus in the Gospels.

Americans can be forgiven if the centrality of Christ in the mission of the Roman Catholic Church has not been obvious to them over the last few decades. From the 1980s until the first decade of the 2000s, the country was embroiled in a culture war that polarised the nation and politicised most public discussions of religion. The political right and the Republican Party linked traditional social morality and aggressive free market capitalism. Meanwhile, the political left and the Democrats attempted to tame U.S. capitalism with an American version of social democracy, while pushing aggressively to ‘privatise’ religion and remove it from the public sphere.

Catholics did not fit easily into either camp, but that did not prevent the onslaught of an ugly era of taking sides. Republican support of traditional social morality appealed to many Catholics, but the party’s laissez-faire capitalism and libertarian hostility to the common good were in direct tension with Catholic tradition and social teaching. Capitalism with a strong, government-supported social safety net, as proposed by the Democrats, also made sense to many Catholics, but the left’s often unveiled hostility to Catholic teaching on social issues caused many Catholics to recoil from the Democrats as well.

Over time, however, life inside the Church began to look a lot like life outside it, and many Catholics collapsed their political and their religious views to create their own vision for what a ‘true’ Catholic ought to believe. ‘Liberal’ and ‘conservative’ Catholics began to mirror the same political polarisation that was becoming endemic in American cultural and public life. If this was not enough to destabilise American Catholicism, the sexual abuse crisis that broke in the late 1990s sent the institution reeling, accelerating a trend of declining church attendance and disengagement with Catholic institutions. The result was the consolidation of parishes and the closing of many Catholic primary and secondary schools around the country, particularly in the large cities of the northeast and mid-west.

In the wake of this division and acrimony, Pope Francis’ visit brought a renewed sense of unity to American shores. He deftly avoided playing into the standard liberal and conservative tropes that have come to define American public discourse. For the first time in recent memory, dignity and decorum returned to a joint meeting of Congress specially organised for the pope. Legislators controlled some of their more boorish habits and sat in rapt attention to hear his address, in which he invoked not only Martin Luther King and Abraham Lincoln, but also Thomas Merton and Dorothy Day. Washingtonians, who tend to view visits from world leaders as an inconvenience, an annoyance, or a reason to leave town for several days, lined the streets in giddy excitement. Similar scenes were repeated in New York and Philadelphia. Media coverage of the visit was intense and almost uniformly positive.

Of course, not everyone was pleased to see Pope Francis. The most common criticisms heard during his visit came from grumpy conservatives who had become accustomed to viewing the Catholic Church as a natural ally. They now complained that this new pope misunderstood capitalism and was unduly influenced by ‘leftist progressive’ ideas on the environment and income inequality. The American political right and many Catholic conservatives were deeply uncomfortable with the political implications of the pope’s message throughout his stay. Right-wing pundits wondered why the pope did not spend more time emphasising the Church’s teachings on abortion and sexual morality, repeating canards about a religious leader being ‘inappropriately’ involved in secular political debates. But criticism did not only come from the right. Some advocates for victims of the sex abuse crisis were bemused, to say the least, when Pope Francis praised the U.S. bishops for their courage in response to the sexual abuse scandal, although he later made it clear that he did not excuse the bishops from responsibility for their failures.

The pope’s remarks throughout his visit drew on concepts across a broad range of Catholic teaching, but the overall tenor of the messages cheered those on the left. He had a lot to say about migration, climate change and poverty, repeatedly reminding American Catholics of the centrality of these issues to a full engagement with their faith. The consistent theme that brought all these topics together was his unceasing attention to the needs of the poor and the marginalised.

Americans are very uncomfortable with poverty and weakness. It is still common for many in this country to blame the poor for their circumstances and to view poverty mostly as a sign of personal failure. A recent study by the highly regarded Pew Research Centre found that a remarkable nine out of ten Americans surveyed considered themselves middle class, regardless of where their incomes fell on the earnings spectrum. Of course, identifying as middle class is not just about income, and in terms of lifestyle, aspirations and cultural identifications, most Americans do not perceive themselves as ‘poor’ or ‘rich.’ But the actual data—and increasingly the realities of many people’s lives—suggest otherwise. Over 20% of American children live in poverty, and the top one percent of U.S . earners control 35% of the country’s wealth.

Slowly, Americans are starting to realise that they have no special entitlement to ever-expanding economic prosperity. Despite the best efforts of their politicians to convince them otherwise, the inability of an aggressive free-market economic model to nurture a comfortable middle-class is becoming obvious to the millions of Americas who still struggle to make ends meet, despite a fairly decent economic recovery. Certain fundamentals of economic life have changed, much of them due to the complexities of the global economy. Indeed, many of the issues that are causing political turmoil are the product of global phenomena that the United States alone cannot control.

Pope Francis may have a better understanding of the effects of globalisation on the American way of life than most Americans do. More than a few commentators on his visit juxtaposed the pope’s message with the Republican presidential primary debate a few weeks prior. As the candidates pressed for mass deportations of migrants and tax breaks for the wealthy, and challenged the notion of religious freedom as it applied to Muslims, the pope met with undocumented immigrants and the homeless, spoke repeatedly about the needs of the poor, and defended religious freedom. It was as if a wise adult had suddenly intervened in an argument amongst a feuding group of adolescents to remind them that everything that happens in the world is not about them.

This may have been Pope Francis’ first visit to the United States, but as a Latin American, he demonstrated an intuitive understanding of the kinds of themes that tend to resonate in the ‘New World’. Like the United States, Argentina was a place of refuge for economic and political migrants. The culture of hospitality to those fleeing deprivation and persecution is deeply ingrained throughout the Americas, even when it is more honoured in the breach. Most Americans are very uncomfortable with strident anti-immigrant rhetoric, but they themselves are encountering new cultural and economic insecurities that have left them uncertain about the future and about many of the country’s traditions of openness and freedom.

Pope Francis confronted these fears head-on. He presented himself as an immigrant to this nation of immigrants and reminded Americans that living out one’s values is something that is not always easy to do. Recognising the American tendency to exalt individualism, he drew the nation’s eyes to the poor, children, prisoners and the disabled, and forced Americans to consider the responsibilities they have to others. By embracing religious freedom, he signalled not only a challenge to those on the left who want to eliminate religion from public discussion, but also those on the right who seem to have forgotten—at least when Muslims are concerned—that the U.S. Constitution makes no distinctions among religions in its provision of freedom of conscience.

In his encyclical Populorum Progressio in1967, Pope Paul VI said with some prescience: ‘the principal fact that we must all recognise is that the social question has become world-wide.’ In the close to 50 years that have followed, it has become very clear that what he said is true. Pope Francis is leading towards a vision of a global community that works together to confront economic inequality, climate change, migration and other pressing matters essential to healthy human coexistence. A global hunger and thirst for justice has concrete implications for life in the United States because a world in which everyone lives as Americans do is a completely unsustainable place.

In a time of so much uncertainty and change, the greatest gift of Pope Francis’ visit to the United States was hope: hope that the nation’s political divisions can be overcome; hope that the United States can be a global leader inspired not by fear, but by faith in the strength of its democratic values and traditions; and finally, hope in Americans’ ability to join with others around the world to confront pressing global problems. Pope Francis gave Americans a chance to reflect positively on what they might contribute to the world by expressing solidarity with the weak and the vulnerable, and he reminded them of the strength and richness of their cultural heritage that, he noted in his address to the Congress, ‘has inspired so many people to dream.’

Vincent Rougeau is the Dean of Boston College Law School.

The Spirit and the Letter