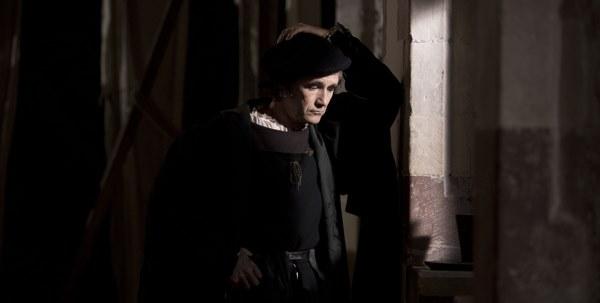 Jane Hellings has seen a preview of episodes 1 and 2 of the television adaptation of Hilary Mantel’s celebrated novels, Wolf Hall and Bring Up the Bodies, and she was as impressed as the author, who said: ‘I feel as if I have fallen into my own story’. What can we expect from the series, which begins on BBC Two on Wednesday 21 January?

(Please note: This review contains mild spoilers for anyone who is unfamiliar with the events described in the novels).

Thomas Cromwell, the blacksmith’s son who rose on the coat-tails of Cardinal Wolsey to become the closest advisor to Henry VIII, is the subject of the BBC Two/HBO adaptation of Hilary Mantel’s Booker Prize-winning novels Wolf Hall and Bring Up the Bodies.

Interviewed at a screening of the first two episodes, Hilary Mantel described the six-part series as ‘opulent, intelligent and witty’, which about sums it up.  She felt that her books had been honoured in the adaptation but didn’t like that term, ‘as it sounds like a compromise, but this is a new medium, a new world… watching it I feel as if I have fallen into my own story’.

In the opening scene, Cromwell (Mark Rylance) merges with the shadows as, in unheard whispers, he thwarts a brace of dukes seeking to force his master, Cardinal Wolsey (Jonathan Pryce), to hand over the Great Seal of England and accept his dismissal as Lord Chancellor.    As every school-child knows, Wolsey has fallen from favour for failing to negotiate with the pope a divorce for the king.

Later, one of these dukes exclaims to Cromwell, ‘Why are you such a person?’  This question is answered for us as the drama unfolds, sometimes jumping back to the past.  The duke’s vision is limited to his own experience – one of the few characters older than Cromwell, he has been a solder, politician and courtier; but is unable to comprehend, and therefore underestimates, the skill and subtlety of this commoner.

For Cromwell is a man with a past like a vast tapestry, of which we can only see the little patch to which our candle is held.  Snippets emerge, in flickers of candlelight: he has been a mercenary soldier, a banker, a lawyer, a cloth merchant, a member of parliament, an abused child; he can speak many languages, shoe a horse, wield a longbow, and remember everything.

Rylance’s performance is beautifully understated.  He carries Cromwell’s experience in his deeply-lined face. (Rylance is 54, Cromwell in his mid-forties as the story begins).  His sombre clothes, always black and grey, contrast with the scarlet of the cardinal and the rainbow hues sported at court.  His dark, watchful stillness seems to suck up the gaudiness of King Henry (Damian Lewis) and Anne Boleyn (Claire Foy) as they come separately to understand that Cromwell is the only man with the answer – to everything.  Lewis and Foy’s excellent performances convey so much more than clichéd histrionics.  They both show steely determination and ruthlessness, but also desperation, doubt and vulnerability.

Mantel was brought up a Catholic but lost her faith at the age of twelve.  She has an obvious deep affection and regard for her hero, who has gone down in history as a self-aggrandising schemer and the principal architect of the English Reformation.  In episodes one and two, this was not a prominent theme, but seeds are sown.  Cromwell has illegally imported a copy of the English Tyndale Bible being printed in Flanders.  On the day of his wife’s death he cannot be found because he is attending a secret meeting to discuss its distribution.  The question of whether this is a judgement hangs in the air. Thomas More (played by the always-good-value Anton Lesser) fails to trick Cromwell into admitting he knows Tyndale.

In a recent interview with The Telegraph, Rylance commented:

[Cromwell] was part of a business community that wanted to have a bible that they can read. They don’t want it translated by a foreign power with stuff in it that when they read it in English they find is not there. There’s no purgatory, no pope, there’s no monks and abbeys. They want an honesty. They want a truth and a new order and an independence for England from a foreign influence. They don’t like, as I don’t like, foreign corporate internationals deciding whether this neighbourhood has a supermarket or whether the local shops survive. I connect with Cromwell on that front.

The facet of Cromwell’s character that Mantel focuses on is his deep personal loyalty to his master – Wolsey in the first two episodes.  As he supports the cardinal in his banishment, Cromwell cares for him like a beloved child.  Rylance conveys deep but undemonstrative grief at Wolsey’s sudden death following arrest, which glides smoothly into desire for revenge against the four young courtiers responsible.  ‘I have it in hand,’ he murmurs as he watches, invisible in the shadows; and we know they are caught in his web.

He says to Wolsey, ‘I once put my hand in a bag of snakes and held one for a bet.’  ‘Was it poisonous?’  ‘That was the bet.’   On the death of his master, Cromwell dons Wolsey’s turquoise ring thus girding himself to plunge his hand once again into the bag of snakes which is the court.

Animals recur, daemon-like.  Cromwell (inevitably) contemplates a spider in its web.  His son has black greyhounds – ‘only a felon has dogs you can’t see in the dark’; and just before he dies, Wolsey’s cat gives birth to a black kitten which Cromwell adopts and names Marlinspike – a tool for untying knots, splicing, and a potentially lethal weapon.

We await, tantalised, to see what happens when this steely desire for revenge combines with fierce loyalty for a new master.

In many ways the stars of the screen are the many authentic Tudor locations – knot gardens, long galleries, cellars and courtyards – in some of which Henry and Anne actually spent time nearly 500 years ago.  The production design and historical research are meticulous and riveting.  In this historical drama we are not affronted by princesses with unbound hair whipping across their faces, queens lugging their own toddlers about, and dresses with zips.  Nor do we wince at anachronistic dialogue and the imposition of 21st century values and norms.  Instead we are enfolded into a Tudor London, peopled with three-dimensional characters who don’t know they are in history and are using their gifts, their luck and circumstances to make free decisions.

Indoor night-time scenes were filmed in candlelight which lends mystery and intensity as well as authenticity.  Claire Foy describes it from the actors’ perspective: ‘We couldn’t see each other, you didn’t know who was there and we were terrified of our big clothes catching fire.’  Life at a Tudor court.

Jane Hellings is Director of Development and Communications for the Jesuits in Britain.

Setting the world on fire? Anti-Catholicism and the Great Fire of London