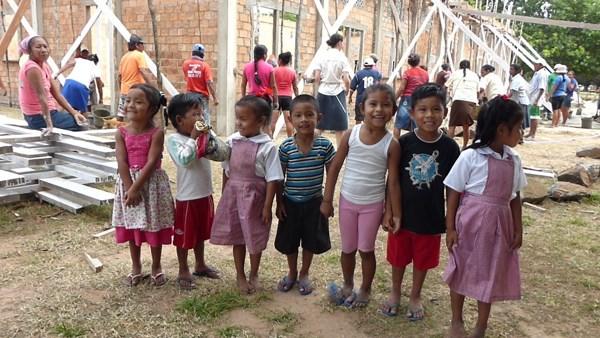 The Ministry of Education in Guyana last week gave its approval for a new programme of bilingual education to be piloted in three nursery schools, beginning in September. For International Day of the World’s Indigenous Peoples, Theodora Hawksley describes how the resource team developed the Quality Bilingual Education Programme for Wapichan Children, and explains the significance of indigenous Amerindian children being taught in their own language for the first time.

It was late when we arrived in Sawariwau, and the villagers were just coming out of an all-day community meeting. ‘With no lunch!’ I said, ‘You must be tired.’ One of the women laughed: ‘Sister, you have to be like us! Strong like turtle!’

Tortoises – or ‘land turtles’ as they’re known locally – are highly prized in the Rupununi. They are easy to catch, delicious and, in theory, a great convenience food. Happen across a turtle when you’re on your way somewhere? Flip it on its back, and come back to collect it later. No fridge to store turtle meat? Paint your name on its shell, and keep it until you need it: after all, tortoises have a shelf life of about a century. The catch, however, is that tortoises are surprisingly good at escaping. A teacher in Karaudarnau told us about a friend’s pet tortoise, which, left unattended for a few minutes, made an unnoticed bid for freedom and disappeared into the undergrowth, never to be seen again. I am also reliably informed that somewhere, a tortoise with ‘ST IGNATIUS’ painted on its shell roams the Rupununi, having escaped its Jesuit captors. Tortoises may not look very imposing, but they have an unassuming determination, and an ability to make quiet bids for freedom.

When Edna said, ‘strong like turtle’ she named a kind of strength that I had been admiring in Amerindian people. In Britain, we would say ‘strong as a bear’ or ‘strong as a bull’, and I had always thought of the struggle for social justice in those terms: the strength to stand up to governments, call companies to account, argue in courtrooms and shout on marches. In Guyana I learned from the Amerindians how the struggle for social justice also means being ‘strong like turtle’, as I accompanied them in their own quiet and determined bid for freedom: the launch of a bilingual education for indigenous Amerindian children.

The bilingual education programme is the latest step in a relationship between the Jesuits and the indigenous people of Guyana that has lasted for over a century. In the 1940s, the Jesuits established the first primary schools in the interior, and new villages formed as people came out of their farming lands in the forests to settle near the new schools. For the Jesuits who led the development of these schools, education was seen a good in itself, a way of recognising and promoting the human dignity of Guyana’s Amerindian peoples. It was also a very practical way of promoting indigenous people’s rights: someone who is able to read, write and do basic mathematics is harder to exploit. Those schools, taken into state ownership in the 1970s, became the backbone of the national education system in the interior – a national education system that now brings nursery, primary and secondary education to some of the country’s remotest communities.

Times have changed, and some of the challenges facing Guyana’s Amerindian population have changed with them. Poverty and marginalisation are perennial: Amerindians are still the poorest group in a country that is itself the third poorest nation in the western hemisphere. They are still poorly served by a political system hobbled by inter-racial tension between Guyana’s East Indian and Afro-Guyanese populations. New challenges also abound, including the increasing exploitation of Amerindian lands and communities though mining and logging. Mining companies, their activities poorly regulated by a government beholden to their wealth, fell trees, dredge rivers and create tailings ponds that leach mercury into the rivers that provide indigenous peoples with food and drinking water. Amerindians looking for some kind of cash income become involved in mining themselves, or emigrate to Brazil, where they often end up working in low-skilled jobs as domestic workers or agricultural labourers. The social upheaval that accompanies these changes is considerable, and there are very few communities now that escape the increasing pressure of a ‘Western’ lifestyle. Brazilian television shows it, local shops sell it, and indigenous people are expected to buy it and, more than that, to buy into it: the cheap goods available in the ever-proliferating Chinese stores come with a free myth, namely that the consumer capitalism that has colonised the rest of the world is the best that life has to offer. For some policy makers and international aid organisations, the relentless march of consumer capitalism is synonymous with ‘development’. The result is increasing pressure on Amerindian people to abandon their traditional indigenous identity and way of life and assimilate. Historically, the remoteness of Amerindian communities, and their ability to disappear into the difficult terrain of the interior have served them well, but this time the attempt at colonisation is both more pervasive and harder to spot.

Where does education fit in to this picture? Successive Guyanese governments have improved access to education and opportunities for indigenous people, and there is a strong sense that indigenous people should not be sidelined into a parallel ‘indigenous education’ system, with lower standards and lower prospects. This means that Amerindian children study the same English-language and Caribbean-culture focused curriculum as children everywhere else in Guyana. On paper, this approach is a commendable one, but in practice, it is deeply problematic. Many Amerindian children grow up speaking an indigenous language as their mother tongue, and will continue to use it throughout their lives. When these children enter English-medium nursery education at the age of three or four, they are robbed of their ability to express themselves and talk about the day-to-day realities of their lives. Tortoise-like, they go into their shells, losing a natural confidence that few regain. One in three Amerindian children never passes the exam that gets them into secondary school, and only one in a hundred will enter tertiary education. A system designed to integrate Amerindians ends up sidelining their language and culture and, in so doing, keeps Amerindians themselves on the margins of national life. Rather than equipping indigenous people to face the mounting challenges to their existence, the education system can end up adding to them.

This is where bilingual education comes in. In the face of such large-scale change and challenge, there are two possibilities. The first is to accept the changes as inevitable, and make the best of them: help Amerindian communities to set up small businesses to take advantage of the trade from people in the mining camps, for example. The model of development is realistic, if reactive. The second possibility is, through education, to encourage Amerindians to become confident in their indigenous identities, advocates for their own rights and way of life, and agents of their own development. The model is transformation from within: drawing on the natural resilience, determination, creativity and imagination of Amerindian people to forge a different path to a greater freedom. This is the vision behind the Quality Bilingual Education Programme for Wapichan Children, which will launch bilingual education for nursery children in South Rupununi in a pilot scheme beginning in September 2018.

The resource team of the Bilingual Education Programme is made up of teachers, community members, artists, Wapichan language experts and and storytellers. Together, they have collected traditional stories to create 36 illustrated ‘Big Books’, so that Wapichan children can learn to read and write in their own language, as well as in English. These books are at the heart of a new curriculum that brings into the classroom the incredible knowledge and experience that the children have at home. Travelling around the villages to interview community members, we spoke to parents whose children had been to the ‘field trials’ of these new books in nursery schools: children who usually came home from school unable to talk about what they had learned, because they had not understood it, were still talking about the Big Book stories months later. That kind of joy in learning, and the flourishing to which it can lead, is priceless.

The path chosen by the communities of the South Rupununi, in collaboration with the Jesuits, is not an easy one. At times, it has been an uphill struggle to convince the Ministry of Education that mother tongue bilingual education is something that will benefit Amerindian children, and prepare them adequately for life. It has also been a struggle to convince them that the Resource Team, most of whom have little formal education, have the knowledge and skills to design a school curriculum. Even having finally secured government permission to start the bilingual programme, significant challenges remain. My work as part of the bilingual programme was to write a report on the state of education in South Rupununi, so that we have a good picture of all of the factors affecting children’s attainment in school. Language and curriculum have a role to play, but we also encountered the effects of poverty, hunger, poor health and the sheer struggle parents face in providing for their families through subsistence farming, hunting and fishing. As we travelled around the villages interviewing parents, teachers and community members, I was moved over and over again by the resilience and dignity of the people with whom we spoke, and their quiet determination that their children would have better lives.

St Augustine said that hope had two beautiful daughters, anger and courage: anger that things were the way they were, and courage to change them. If I were to write a Big Book about Guyana, I would tell the children that social justice has two parents, bear and turtle. Bear will growl, stand up and fight. Turtle will be quiet, resilient, gentle, dignified, determined, and free.

Theodora Hawksley is a theologian specialising in peacebuilding and Catholic social teaching, and spent three months in South Rupununi in 2017 working as a researcher for the Quality Bilingual Education Programme for Wapichan Children.

Daniel Berrigan SJ: Going back to the poetry
The Book of Revelation: Six homilies for Easter
Our freedom and God’s praise and glory
Partners in mission
Fr Francis Xavier SJ