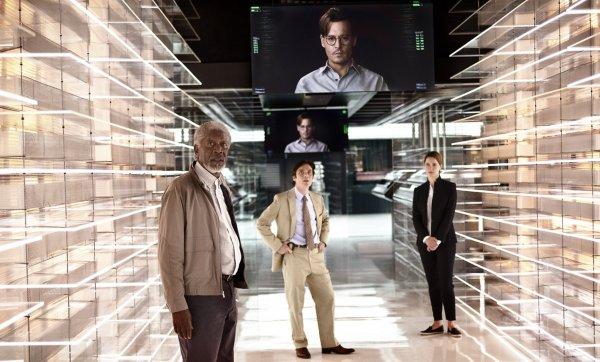 This film is too subtle for mainstream success and it is difficult to know who to blame.  The trailer pitches a Hollywood thriller about an evil, computerised super-intelligence, and the truth is almost the opposite.  The folks on the marketing floor should not be held entirely responsible, because this confusion seems to have been shared, for the first half of the film anyway, by the director and the writers as well.

The big-name cast, however, to their great credit, tune into the film’s meaning exactly and demonstrate that there might be something after all substantial to stardom.  A series of understated, secure performances matches up with what the film, despite its billing, actually delivers.  Far from being a cutting-edge cautionary tale about the dangers of technology, perilously-centralised infrastructure and artificial intelligence, this is a soft-spoken, even delicate tale about a love so uninsistent that is almost slips past unseen.

Dr Will Caster (Johnny Depp) is the genius computer scientist who is fatally wounded by a neo-Luddite terrorist group, but before he dies, his nearly-as-genius wife, Evelyn (Rebecca Hall), and best computer pal (Paul Bettany) upload his consciousness onto the supercomputer he helped design.  Nearly the first words out of digital Dr Caster’s mouth are a plea for more power and satellite access to Wall Street, and so we are justified in anticipating the typical storyline: lots of scrambling about before the super-tyrant is narrowly diverted from conquering the world.  We are justified, and we are wrong.

Flash forward two years and the story picks up in an underground, temperature-controlled research facility somewhere in the middle of the desert.  Off the grid and powered by an ever-expanding array of solar panels, computer-Will and Evelyn have been diligently labouring to resolve the world’s crises.  Drawing upon their virtually unlimited computational power, the Casters are deep into developing a nanotechnology which works miracles:  inject it into men and the lame walk, the blind see; pour it over brown ferns and oily water, and both are regenerated pristine.

So what’s the problem?  It turns out that as he has repaired the damaged bodies of an ever-lengthening queue of pilgrims, computer-Will has also been adding a modification or two of his own.  His patients not only gain eerie super strength and the ability to micro-repair after a few rifle rounds in the chest, they are also neurologically grafted into the worldwide web.  The result?  Outpatients who from time to time speak disconcertingly with the voice of their digital benefactor, and, as an investigating defence contractor (Morgan Freeman) and FBI agent (Cillian Murphy) nervously point out, would seem to be assembling into an army.

This is the moment of uncertainty as much for the characters in the story, it would seem, as those behind the camera and in front of the screen.  Because the subordination of a person’s self-command, however momentary, to the interests or service of anyone outside him- or herself is necessarily an abomination in our modern world.  Right?

At this point we discern the distortion that causes of the central confusion of the tale.  The culprit is an influence alien to the story’s native logic, and might be described as the cultural-spiritual echo of Patrick Henry, still clanging after two hundred years - ‘liberty or death!’ Freedom rings just a touch too loudly in this sensitive film, and all but drowns out its key note.  But the sensitive listener will be able to pick out an altogether softer sound, a central three-part harmony of wonder, willing deference and love.

This is why the film is failing.  We were not properly prepared.  We know that you give anybody a privilege on this planet and he will walk all over you: this is the law of an ailing democracy, and this is the law of the movies.  We expect our larger-than-life images to show us vice and not virtue.  We expect all power to corrupt.  So can any of us really be blamed if we came into this film expecting the mugshot of a villain instead of a portrait of paradise?  Surely it is ludicrous to expect anyone with total knowledge, total freedom and total power to be moved by anything so simple as the wish to be generous.  It is ludicrous… that is, until we recognise how close Transcendence comes to a definition of God.