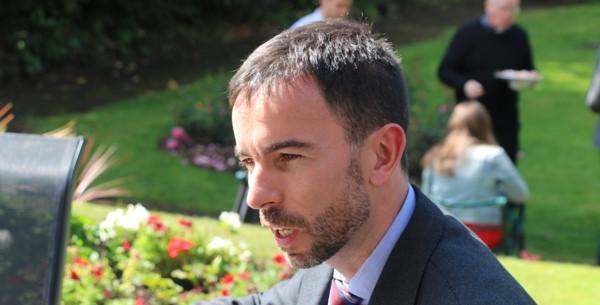 Earlier this year, Fr General Arturo Sosa SJ announced four new Universal Apostolic Preferences of the Society of Jesus for the next ten years: Promoting Discernment and the Spiritual Exercises; Walking with the Excluded; Caring for Our Common Home; and Journeying with Youth. Jesuit scholastic Stephen Noon is confident that the Spirit has been at work in the discernment of these priorities for the Jesuits.

It was not quite at the same level as my childhood eagerness for the coming of Santa and Christmas morning but, yes, I will admit it, as someone with just three and a half Jesuit years, I was waiting with a fair degree of anticipation and expectation for the apostolic preferences. One of my first experiences as a Jesuit after vows was to take part in our community discernment, with the chance to offer my own ideas, and so, even in that smallest of ways, there was the sense that these are not just the Society’s preferences, but also my preferences, also all of our preferences. More importantly, they will, or at least should, in some way shape my early years of mission in the Society and that is absolutely something worth getting excited about.

My first reaction was one of delight, which has mellowed into a deeper sense of consolation. In their obviousness and simplicity, and capacity to draw in all our different talents (whether spiritual, intellectual or practical), the four preferences felt right, and feel right. What else would Jesuits be doing other than the Exercises, walking with the poor, caring for the planet we live on and engaging young people?

The ‘headline’ preferences, of course, only give us the big picture and while I could quibble over some of the expressions used in the more detailed explanations of what each preference means, or point to potential gaps, there is a fundamental strength to them, individually and as a whole. There is a balance within them – for example, the recognition that we both give and receive, especially in work with the marginalised and the young who will convert us as much as we seek to serve them – and also, as I will flesh out more fully, an important flow and connection between them.

A big part of this is what I would call the implicit ‘why’ – that is, the answer to the question ‘why am I a Jesuit?’ or ‘why have a British province of the Society of Jesus?’ or ‘why have the Jesuits at all?’ – that the preferences contain. We would perhaps each phrase it in different ways, but I think that putting the Exercises front and centre, tells the world something very important. We are Jesuits because we want to help people to a life-changing, deepening and ongoing relationship with Christ. We first meet Christ and from that all else does follow.

The Christ we ourselves encounter in the Exercises is the Christ we want to share with others – or as General Congregation 34 phrased it, a Jesuit seeks to ‘freely give what he has freely received: the gift of Christ’s redeeming love’.[i]  It is the Christ who we want not just to know or love, but also to serve (among the poor, with the young, and by cherishing and protecting the wonders of creation).

There is, therefore, a unity, a fullness and a depth that fills me with hope and which gives me the strongly felt sense that this has been a good discernment – the Spirit has been at work.

In my own, personal discernment, one of the most useful exercises I do, inspired by fellow scholastics in Paris, is a weekly ‘academic examen’. As the name suggests, in this examen I look to see where God has been most present in my studies. For a good many months, the idea that has had most spiritual and intellectual life, that has sparked most interest, is Bernard Lonergan’s ‘scale of values’ (alongside his writings on conversion, supplemented by Bob Doran’s thoughts on ‘psychic’ conversion). Lonergan speaks of values at a religious, personal, cultural, societal and ‘vital’ level and it is within this framework that I see also the possibility of powerful interconnection between the preferences.

As I conceive it, grace, God’s loving action in the world, enables conversion on the religious level, which then flows into and changes how we decide to behave. This second conversion on the personal level then begins to impact also the culture within which we operate. As we begin to turn our culture more and more towards what is good, individually and collectively, there is then change at a societal level and, finally, as our society changes so too does the way we experience, and share, the goods of society, enabling more of us to be housed, clothed, cared for in a way that meets basic human needs (the vital values). From religious conversion we begin to turn the wheels of society in a way that makes a difference right down to the most basic aspects of human life.

The Exercises are all about that religious conversion – that is our starting point. We encounter Christ in new ways, and we re-enter the world with a determination to serve God’s plan more fully. Personal conversion is enhanced as we reach out, as Christ asks, and allow our experience of walking with the poor, of working with those on the margins also to change us – helping us perhaps to let go of the consumer comforts and find new freedom.

With spiritual depth, simplicity of life and greater integrity in our actions, we can engage with young people in a process that begins to shift their cultural assumptions and expectations; we can show that there is another way. And, by our words and our actions, with our witness inspiring others, with cultural norms challenged or changed, we can begin, more and more as a society, to inhabit this planet in a way that truly cares for our common home.

Each element, and each preference, is distinct and has its own dynamic, but like cogs in a wheel, each is connected. It is the grace of God or, as I imagine it in my prayer, the living waters that flow from the pierced heart and wounded side of Christ, that serves to turn these wheels – religious conversion, personal, cultural, societal conversion – creating a cascade of loving action that transforms each of us. And, yes, through our transformation – personal, as a Society, as a Church community – we can, more and more, begin to also transform our world.

Stephen Noon SJ is a Jesuit of the British province studying at Regis College, Toronto.

St Henry Morse SJ: ‘A saviour of life unto life’
Alfred Delp: committed to Christ
‘The Fight Between Carnival and Lent’
Richard Attenborough: A life in pictures
‘Give them something to eat’: The Christian approach to food aid