Skip to main content
Photo by Jack Dorsey at flickr.com 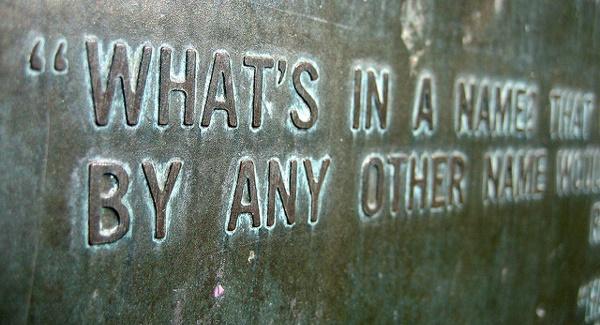 ‘The size of Shakespeare’s vocabulary was a direct reflection of what he wrote about – which was virtually everything.’ For the 400th anniversary of the playwright’s death, David Crystal explains why counting the number of words in the Shakespearean canon can never be an exact science. Nevertheless, we can still identify the semantic field of which Shakespeare made more use than any other: religious language.

There is a striking numerical parallel between Shakespeare and the King James Bible of 1611: both canons contain roughly 880,000 words. The ‘roughly’ is important, because it isn’t at all obvious what counts as the ‘canon’ in Shakespeare’s case and what counts as a ‘word’. There is ongoing debate about which plays he had a hand in, collaborative writing being so normal in those days. If you include King Edward III and Sir Thomas More, for instance, your total is going to be appreciably greater than if you do not. And then, once you’ve decided on which works to include, you have to worry about all the linguistic issues. What is a ‘word’?

You will worry about how to handle compound expressions. When Edgar calls Oswald a ‘base, proud, shallow, beggarly, three suited, hundred pound, filthy worsted stocking knave’ (King Lear, 2.3.14), do we count this as 12 words (if all hyphens are omitted) or as 11 (if just worsted-stocking is hyphenated, as the Arden edition does) or as 10 (if it is filthy-worsted-stocking, as the Penguin edition has it) or as 9 (if three-suited and hundred-pound are separately hyphenated, as in Penguin) or as 8 (if it is three-suited-hundred-pound, as in Arden)?

Then you have to decide whether to include all editorial emendations, modernisations, and variants between Folio and Quarto texts. What exactly is being said when Mistress Quickly describes Falstaff on his death-bed: ‘his Nose was as sharpe as a Pen, and a Table of greene fields’ (Henry V, 2.3.16, First Folio text) – do we keep table, emend to babbled (as many editions do), or opt for something else? The total will grow if you include every variant, and there are hundreds.

You have to decide what to do about proper names. These are usually excluded in word-counting exercises, as they relate more to encyclopaedic knowledge than to linguistic intuition. Just because I know the words Paris and Marseilles, it doesn’t mean that I can speak French. On the other hand, some proper names do have more general significance, such as Eden, which the dying John of Gaunt uses to describe England (Richard II, 2.1.42), so presumably they should be included in the total.

You have to decide whether to include onomatopoeic ‘words’, as when Edgar, disguised as Poor Tom, shouts Do de do de. Sese! (a hunting cry, King Lear, 3.6.73). And what about humorous forms, such as malapropisms? When Dogberry says he has ‘comprehended two aspicious persons’, aspicious is a variant of auspicious and a mistake for suspicious (Much Ado About Nothing, 3.5.43). How do we count this?

Then, finally, you have to decide whether to include foreign words. Shakespeare uses over 600 Latin, French, Spanish and Italian words. When characters are definitely speaking a foreign language, the words might reasonably be excluded from the English total, but it isn’t always clear when something is foreign, as when the gravedigger says argal (= Latin ergo, ‘therefore’ [Hamlet, 5.1.19]) or Polonius says videlicet (= ‘that is to say’ [Hamlet, 2.1.61]).

Depending on how we answer these questions, our Shakespearean total will vary by a thousand or so. But most of those who have written on this subject conclude that Shakespeare used ‘around 20,000’ different words. That was a very large vocabulary for those days. If we compare the King James Bible, we find (excluding proper names) only some 6,000 different words. This of course was a text which by its nature was thematically highly restricted, and it was a translation that was consciously conservative in character. The size of Shakespeare’s vocabulary is larger because it was a direct reflection of what he wrote about – which was virtually everything. It is the difference between people, situations and subject-matter that generates different kinds of vocabulary.

Shakespeare is acknowledged to be unmatched in the range of his characters, settings and themes. Here is King Henry responding to the Duke of Burgundy’s request for peace (Henry V, 5.2.68):

You have enscheduled briefly, in your hands.

‘Sblood, you starveling, you elf-skin, you dried neat’s tongue, you bull’s-pizzle, you stock-fish! O for breath to utter what is like thee! You tailor’s-yard, you bow-case, you vile standing tuck!

If you write love stories, that will motivate a further lexical domain. Here is Juliet awaiting the arrival of Romeo (Romeo and Juliet, 3.2.1):

Gallop apace, you fiery-footed steeds,        Towards Phoebus’ lodging! Such a waggoner        As Phaëton would whip you to the West        And bring in cloudy night immediately.        Spread thy close curtain, love-performing night,        That runaway’s eyes may wink, and Romeo

Leap to these arms untalked of and unseen.

If you write about the most profound kinds of mental conflict, you will employ words that go well beyond the everyday. Here is one of Hamlet’s reflections (Hamlet, 3.1.85):

Thus conscience does make cowards of us all,        And thus the native hue of resolution        Is sicklied o’er with the pale cast of thought,        And enterprises of great pith and moment        With this regard their currents turn awry

And lose the name of action.

And if you write about religion? Here is Hamlet’s ghostly father telling his son how he died (Hamlet, 1.5.74):

Now we have a very different lexical world, with terms with an exclusively religious interpretation in line 4 above (‘unprepared, unanointed by a priest, without communion’) operating alongside a basic religious term (sin), everyday words with a spiritual application (imperfections), and a figurative use of terms from a different semantic field (economics: reckoning, account).

If you write in all of these domains, and more, inevitably you will end up with a vocabulary total that makes you stand out from your contemporaries. Although many other Elizabethan writers were great word-inventors, none match Shakespeare for lexical diversity.

Shakespeare’s religious vocabulary is actually a major feature of his writing. If we go to Martin Spevack’s invaluable Shakespeare Thesaurus (1993) we find 1030 items in the ‘religion’ category. This is roughly the same number as are included in Chris Hassel’s dictionary of Shakespeare’s Religious Language (2005). Roughly a twentieth of his total word-stock, therefore. No other semantic field is so well represented in his writing – for example, the field of law, in the Thesaurus, reaches only 552. Of course, there will always be some uncertainty about which words count as religious. Some, such as devotion and mercy, will not have a religious application all the time. And there will be cases, such as the use of equivocator in the Porter scene in Macbeth (2.3.8), where the decision as to its religious relevance will depend on historical and literary (rather than linguistic) reasoning. But here, for the record, are Spevack’s sub-categories, with some examples of each, and the totals:

I find it intriguing that oaths form the largest category by far. But it’s the range of the vocabulary that is significant, for this is why it has proved impossible to say with any certainty what religious belief Shakespeare had. It’s easy enough to identify within this lexicon certain items that are distinctively Catholic in character, such as those to do with confession, but these emanate from the mouths of Catholic characters (such as Friar Laurence in Romeo and Juliet), and tell us nothing about the playwright. We could use Shylock’s defence of his religion (in The Merchant of Venice, 3.1.53) to support the contention that Shakespeare was Jewish. Items that relate exclusively to a single religion or denomination also form a very small proportion of the religious vocabulary as a whole. There are several speeches where we could read in Catholic, Protestant or Puritan meanings to the words. Perhaps the most remarkable thing about Shakespeare’s religious language is that it allows us access to so many different belief systems. Whether we are Catholic or Protestant, theist or atheist, we all seem to find a point of connection with what he is talking about.

Shakespeare never speaks in his own voice. Even in the Sonnets, which we might imagine to be a direct insight into a writer’s thought, we find uncertainty. Who actually is the person writing these sonnets, and to whom? Arguments over the persona continue, in both the poems and the plays. I was once present at a conference where novelist Anthony Burgess was talking. In the question-time, a member of the audience objected to something Burgess had written, and he began his comment with: ‘Mr Burgess, you say in your novel...’ Burgess intervened: ‘I don’t say. My character says.’ I imagine Shakespeare making the same riposte.

David Crystal works from his home in Holyhead as a writer, lecturer and broadcaster on language and linguistics, with special reference to the English language. He is honorary professor of linguistics at the University of Bangor and lives online at www.davidcrystal.com