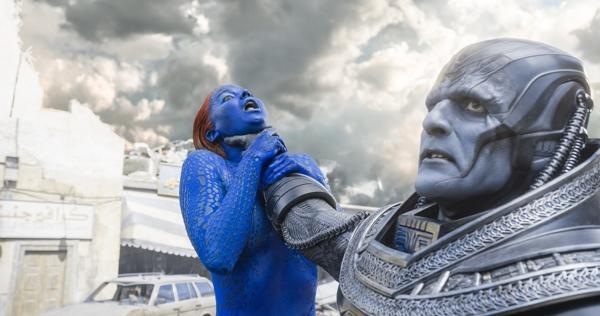 The film opens in 3600 BCE in the Nile Valley with a powerful mutant preparing to transfer his consciousness into another body. He is ostensibly worshipped as a god by many people. However, he is betrayed by those who deem him a ‘false god’, which results in the destruction of his pyramid temple and him buried beneath the rubble.

Fast forward to 1983, ten years after the events of X-Men: Days of Future Past and in the alternate timeline set up by the events of that film (viewers who have not seen that film are likely to be confused). The mutant is accidentally woken and freed from his tomb, and after familiarising himself with the current state of the world, he declares that the ‘weak have taken the earth’ (there is a quick shot of a pope just as he says this, which may be easily missed).  ‘Everything they've built will fall!’ he says. ‘And from the ashes of their world, we'll build a better one!’ The rhetoric is familiar, a Nietzschean approach to life where the strong are meant to rule the weak and to endure forever.

The word ‘apocalypse’ in the film’s title alludes to not a ‘revelation’ of any kind but to the name of this mutant who plans to do exactly what the common meaning of the word apocalypse suggests: bring about the end of the world. Since the film borrows some of its apocalyptic imagery from the Book of Revelation, we see Apocalypse assembling ‘four horsemen’ (mutants whose abilities he augments) as he proceeds to ‘cleanse’ the earth. As is to be expected from our familiarity with this nearly oversaturated genre of films in which super-villains set out to destroy humanity, the X-Men will have to face him in order to prevent world destruction.

The narrative of the enhanced versus the unenhanced, and the prejudices and fears of both sides have already been painted in many films, not least this film’s predecessors in the X-Men franchise. The not-so-new angle here is that of an internal war among mutants. Should powers be viewed as a gift or a curse? Should they be used to serve the world or to dominate and destroy it? The plot is driven by the competition between these two ideologies: Apocalypse wants to give the earth to those with the greatest power, while Professor Xavier urges those with power to protect those without and wants to demonstrate that absolute power does not have to corrupt absolutely.

The most entertaining, hilarious and visually impressive bits of the film are the slow motion sequences with Peter Maximoff/Quicksilver played by Evan Peters, who was also a highlight of the previous film. In the impressive cast of this new generation of mutants, he is joined by several new faces, the most familiar of which belongs to Sophie Turner (of Game of Thrones fame) while the least recognisable is Oscar Isaac’s as Apocalypse. Turner plays a very convincing Jean Grey on the cusp of discovering her telekinetic and telepathic powers, and her storyline directs us towards the most illuminating angle from which to view this and every other comic book-inspired film, that of asking ourselves: ‘what would you do if you woke up tomorrow with tremendous “power”’?

With a plethora of mutants on the screen it is hard to keep track of each individual storyline. Nevertheless, the film delivers a satisfying tale accompanied by fantastic action sequences and is punctuated with humour throughout. This being the ninth instalment in the series, everything even in this world so superficially different from our own does feel a bit too familiar, but it does give us another lens through which to ask a perennially important question: how do you choose to live the life you are given?