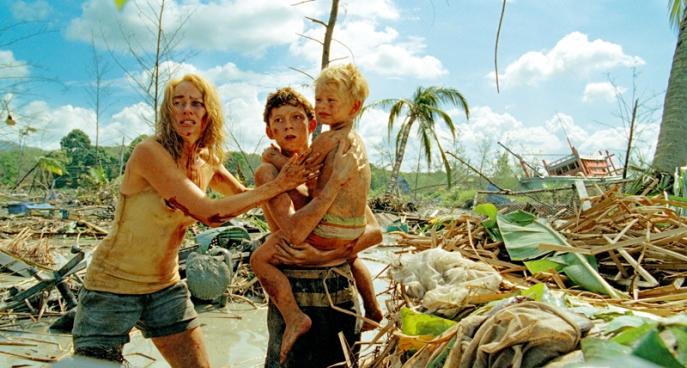 
Christmas 2004 was to be a once in a lifetime experience for the Spanish Belon family, who planned to celebrate it on holiday in Thailand. It certainly ended up being a life-changing trip: The Impossible tells the true story of the family’s pain and endurance in the aftermath of the Indian Ocean tsunami which devastated the region on that fateful Boxing Day and claimed the lives of nearly 230,000. It is an extraordinarily powerful film, moving and gripping in equal measure, and a testament to the power of family unity. Spanish director, Juan Antonio Bayona had worked previously with writer Sergio Sánchez on the highly acclaimed The Orphanage and they deserve as much credit for The Impossible.

Maria (Naomi Watts), her husband, Henry (Ewan McGregor), and their three boys, Lucas (Tom Holland), Thomas (Samuel Joslin) and Simon (Oaklee Prendergast) appear typically middle class as we meet them on arrival at their luxurious resort. We are given little time to get to know them better before the devastating power of the tsunami strikes. Bayona and his cinematographer, Óscar Faura are to be congratulated for recreating the appalling natural disaster that laid waste to an area of outstanding beauty and tranquillity. It is simply a stunning piece of filmmaking. The use of sound in particular as Maria and Lucas are tossed helplessly by the current and lashed by debris is gut-wrenching. As they come up for air or plunge to depths of despair you are taken with them in an experience that no other filmmaker has yet managed to create.

Watts and McGregor are strong and believable, with Watts earning herself an Oscar nomination for Best Actress. To portray raw emotion and pain on film requires a delicate balance between performance and authenticity, and they both achieve this magnificently. However, the best performance is by Tom Holland (educated at the Jesuit schools, Donhead and Wimbledon College) as Lucas. He began his acting career as Billy Elliot on stage and has made the transition to the screen with a gravitas and skill that is refreshing and bold for someone still so young. He acts as if he was actually experiencing the pain of separation as he searches for his family. A chaotic scene in a hospital, with missed chances and misplaced people, is wonderfully done and you share Lucas’s angst and fear that things might not turn out the way he wants them to.

A criticism that can be levelled at the film is that it does not register fully the impact on the local community or the incredible loss of life suffered; relatively few dead bodies are depicted and those that we see are presented carefully. As such, the film does have an overly Western focus. But this is supposed to be a story told through the eyes of one family about loss and despair, grief and shock, and a determination and hope against all odds.

When Lord Byron wrote many years ago, ‘Roll on, thou deep and dark blue ocean – roll!/ Ten thousand fleets sweep over thee in vain;/ Man marks the earth with ruin – his control/ Stops with the shore’, who could have known how prescient these lines would prove to be? The absence of control in the film is a reminder that the power of our planet is something we can overlook too often in our desire to control our lives.

As a father of three boys and a daughter myself, I found the scenes where the family come together extremely powerful. Any parent should be advised that after seeing this film you will hold your children a little tighter and for a little longer than usual. Maybe that is no bad thing.

Our Life Together: A Memoir in Letters

Ignatius of Loyola: ‘Placed with the Son’