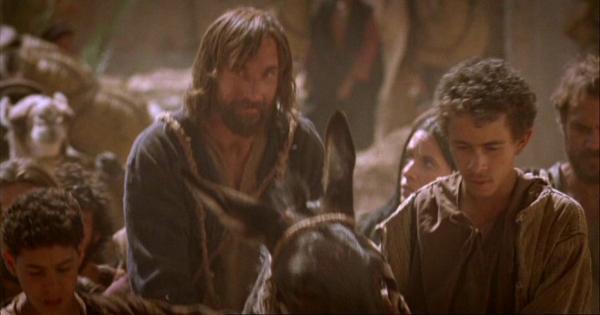 In the first episode of BBC 1’s The Passion, Michael Barnes SJ finds brilliant story-telling, beautiful imagery and an imaginative exploration of the deeply human dimensions of the Passion.

The question about the meaning of Holy Week has to be asked – because this is for Christians the founding moment on which our view of God, humanity and the world depends.  Jesus is more than an example of suffering with whom we can somehow sympathise.  The challenge for any account of his passion, death and resurrection is to root the question of meaning in the events themselves.  It’s a challenge which the four gospels meet with rare power and insight – and that, of course, is the reason why they are considered the canonical writings of the Church.  There is just the one story, the record of very particular events, yet told from different angles, with individual characters and brief sub-plots building up a theology from which the Church takes its life.

BBC 1’s The Passion, which will be shown in four episodes during Holy Week, focuses squarely on the human side of the drama, conjuring a version of the familiar story in which every tiny detail is made to count.  Whether it also addresses the  question of meaning will have to wait until the end of the week.  But if last night’s first episode is anything to go by, the signs are favourable.

A strong cast is headed by Joseph Mawle as Jesus, James Nesbitt as Pilate and a wonderfully tortured Ben Daniels as Caiaphas.  They represent three forces which move inexorably together as the story unfolds.  With the feast of Passover approaching, the Roman procurator and his retinue of thuggish guards are about to descend on Jerusalem, determined to get through the week with the minimum of trouble.  Over in the temple precincts the religious establishment is desperately looking for ways to convince their hated masters that they really can control their unruly population.  Meanwhile, with tensions running high, rumours go around that the preacher from Nazareth is approaching the city.

It is the great merit of Frank Deasy’s script that he makes us witness the clash of these forces through the eyes of minor characters who are, for the most part, neither heroes nor villains, just flawed individuals with their petty jealousies and lack of comprehension.  As the Roman soldiers come to a halt outside the praetorium, Pilate’s appallingly snobby wife has had enough.  She sniffs the air, refuses to trust the water and demands wine instead.  Caiaphas’s wife is made of sterner stuff.  While her husband agonises over the independence of the Temple, she is concerned for her family and the child she is expecting.  Jesus prepares to enter the city, seated on a colt which he has just bought from a bemused stranger.  It’s a joyfully chaotic triumph.  The disciples smile nervously, aware of the prophecies which this action will fulfil, but uneasy at the prospect of what awaits them.  Matthew is predictably dull; John and James, despite the tough exterior, think the Kingdom of God means a comfortable life in great palaces.

There are only two real ‘baddies’ – the two Judases, Barabbas and Iscariot.  The former is in many ways the fulcrum around which the narrative revolves.  By killing a tax-collector he unwittingly draws Jesus into the hands of the jittery Jewish authorities.   The latter is, as always, a more ambiguous figure, compromised by greed and ambition – aware at the end of the episode of the awful enormity of what he is about to do.

This is brilliant story-telling, carefully plotted and visually superb.  One shot, in which Jesus is showered with blood-red poppy petals scattered from windows above, makes for a perfect counterpoint to the traditional waving of palms.  Jerusalem, with its narrow alleyways and cramped corners, and the Temple stained by blood sacrifices and burnt offerings, looks just like the provincial backwater which the Romans profess to hate.  Apart from the clichéd mood music as Jesus walks through a desolate landscape marked by ominous crosses and smoking fires, the production scarcely puts a foot wrong.

But does it offer an answer to our theological question?  It certainly gives us plenty of Jesus’s teaching, parables and repartee with friend and foe alike.  And as the mood darkens we are given an insight into Jesus’s own mind as he seeks to comfort his distressed mother.  The Kingdom, as he repeats several times, is ‘within’, a matter of the heart.  But this is no limp liberal spirituality.  He speaks of the voice of the Father and the supreme honesty which God’s blessing brings to his every word and action.   Maybe that challenge was more than most of these very human characters could take.

Michael Barnes SJ lectures in the Theology of Religions at Heythrop College, University of London.  He is the author of Theology and the Dialogue of Religions (CUP, 2002).

Theology and the Dialogue of Religions by Michael Barnes SJ

Watch this episode on BBC iPlayer (available until 23 March)