Skip to main content
Picture by Donut_Diva at flickr.com 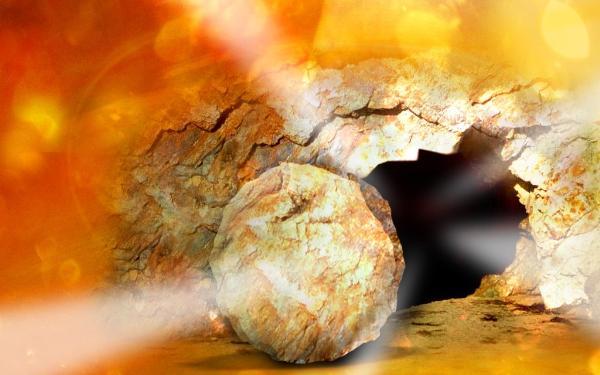 As our Easter celebrations continue, James Hanvey SJ invites us to enter into the mystery and strangeness of the Resurrection to recognise God’s love coming to meet us in the person of the Risen Christ. ‘The Resurrection is not something which requires our faith to abandon reason; it is reason's healing and restoration.’

At the Easter Vigil the silence of death is broken. In that ancient hymn, the Exultet, the Church sings her Easter Magnificat. Before the world she witnesses that Christ is raised:

There is something deep, almost primal, about the imagery of light breaking out and scattering the darkness – the ancient struggle against the finality of death in all its forms is finally resolved in the triumph of life. But this is not the catharsis that comes with the resolution of some mythic drama. Our vigil is not the reconciliation of contradictions in which the cosmic puzzle is definitively solved. We neither proclaim a wonderful comforting fiction produced by the consummate and subtle art of the religious imagination, nor do we celebrate the validity of some transcendental truth that might enrich our lives. We witness to no creation or abstraction but to a person, the Risen Christ, flesh and blood, truly God and truly man. The Resurrection is the great scandal at the heart of our faith. It is God’s work done, not in some flash of blinding glory, but when no one was looking. We are only witnesses to a work already accomplished. It is a work which changes everything, even the way in which we now know God: the object of Christian faith is not simply God, but God the Father who raises up his Son, Jesus Christ, in the power of the Holy Spirit. This is not an aloof and detached deity but the life of the Trinity open for us in our history, offering us a new life, a new way of being and seeing, and calling us to a moment of decision. That Jesus is Lord is the Church’s earliest profession of faith, and it is grounded in her experience that he is raised from the dead (Rom 10:9; Phil 2:11; 1Cor 12:3). Everything is changed.

Yet the reality of the Resurrection never loses its impenetrable mystery. To say so is not a way of dodging the hard questions that a sceptical world asks, nor is it a way of avoiding the hard work that faith has to do. The Resurrection is a scandal precisely because it cannot be understood, explained or mastered on our terms. It does not oppose human reason or the ways in which we come to determine what constitutes history; it asks us to rethink them. If our scientific discoveries – Newtonian physics, Einstein’s relativity and Quantum physics – require us to change how we understand our world and its possibilities, how much more so does the event of the Resurrection? Those words of the mysterious figures at the empty tomb which declare that Christ ‘is not here’, or ask ‘why do you seek the living among the dead?’ give us a clue: they mark the way that leads from our familiar assumptions and the prejudices etched within our death-bound existence, to the reality of the Risen and Ascended Lord who opens for us the limitless horizon of God’s own life. This is why the Resurrection, while it happens in time, is not bounded by it: ‘Christ yesterday and today, the beginning and the end, Alpha and Omega, all time belongs to him…’.

We can sense the beautiful strangeness of the Risen Christ in the gospels. They strike us with inconsistencies and puzzles which, at first sight make them seem implausible as hard evidence. But how do you speak about something that is utterly new? How do you think and react to something which you could not have experienced before, or trust your senses and your judgement when everything says ‘this is impossible’ but yet here you are, and it is real, maybe even more real and intense than anything you have ever experienced?

Of course no two people tell the same story in the same way. There are differences of detail and emphasis which reflect the concerns and styles of the different gospels, but there is also a surprising transparency. They do not disguise the fear and even disbelief. They allow the testimony of women, which would have not been accepted as valid in Jewish law. They don’t portray the disciples as heroic men who are utterly reliable. All the accounts of the appearances show remarkable restraint. They all, especially the austere, almost brutally short, account of Mark, record fear and confusion and failure to understand. But there is a consistency about the Jesus they encounter. His appearances are oddly low key and intimate, not the great triumphant theophany one might expect. They are not hallucinations, nor are they like the transfiguration; all are clear that the Resurrection is not resuscitation like that of Lazarus, or the boy at Nain, or Jairus’s daughter. Jesus is alive, in the total integrity of his body and soul; he bears the marks of his suffering and crucifixion, he can be touched, he can eat, he speaks and consoles – he is very much alive. Yet he is strange, his body inhabits time and space but is not bound by them ; in some sense it is ‘physical’ but it seems to have properties which we have never experienced or seen before –the scholastic theologians referred to them as ‘agility, clarity, immunity from pain and decay, absence of density'. Some modern scholars speak of a ‘transphysicality’. However we try to comprehend the accounts of the appearances, they represent attempts to understand and to express the mystery of the finite transposed in the glory of God’s life: it is a vision of life not only beyond death but beyond life.

It is tempting to linger over these features, to interrogate them and wonder how they could come about, as if they were some sort of divine special effects. We do not have any category into which they will fit, they are their own category. They stand always within the power of God who, in raising him from the dead, witnesses that Jesus is truly Son whose sacrificial self-gift has been accepted. The Resurrection is the Father’s testimony that in Christ we are saved. Indeed, the features become an obstacle if they absorb us so much that we miss the presence of the Risen One who stands among us. The person of Christ is the event of the Resurrection. We can’t avoid him, ignore him, go round him, climb over him or lock him out of the room. He’s no longer subject to our conditions; that is why his Resurrection is at once so liberating and so frightening.

Many of the gospel accounts of the appearances seem bathed in light. This delicate but uncanny luminescence is not just the freshness of the morning light, it is the glory of the Kingdom breaking upon us. Slowly, as with the disciples, in this light of glory, we adjust to a new way of seeing and of understanding - a new way of being. The Risen Christ has to re-teach us and go on re-teaching us, not only because we resist or are slow learners, but simply because of the mystery which we encounter – we can’t hold it all at once or for very long. This is why the Resurrection is always about the Spirit who continues to teach us and the community which continues to hold the truth for us. In the end, the Resurrection is not a problem to be solved it is a call; the giving of a mission to follow the Risen Christ. When we grasp that the Resurrection on Easter morning is one event with the Ascension and Pentecost as well, then we can see that this ‘moment’ expands through time. It carries the power of the ever expanding salvific love of God in Christ, continuously given in the out-pouring of the Holy Spirit – the love which urges us on – reaching every generation and every moment in history. In this sense, the Resurrection is a dynamic immanent future which impels us to our final consummation and fulfilment. In the Resurrection of his Son, God reveals the whole reason for creation and our gift of life. Often the Resurrection is presented as a stumbling block to reason only surmounted in some blind leap of faith. The contrary is the case. The Resurrection is not something which requires our faith to abandon reason; it is reason's healing and restoration. It means that we can see and know clearly now not only that God Himself is our reason, the end to which all things move and in whom they find their meaning, but that this reason is Love in person that comes in search of us. In the new light of Easter we see God’s reason: that we might not be lost, it is willing to suffer the contradiction of the Cross and enter into final oblivion of all reason in death. The future that abides with us in the Resurrection is the presence of the Risen Lord. It is a future which, in some sense, we already live now by the gift of grace. We not only witness to Christ but we live in him – a reality which is with us every day in the celebration of the sacraments. This immanent future is the moment from which all the moments of our life take their orientation: ‘and lo, I am with you always….’ So, the Resurrection permeates the whole of existence, and orders it towards its goal and fulfilment. It means, too, that all those whom we love and have lived with in this Resurrection faith are not part of our past only but part of our future.

When we begin to understand this and to experience its truth, then whatever the darkness through which we have to travel, our whole life becomes a sort of Easter Exultet that the Church comes to sing in us:

What good would life have been to us,
Had Christ not come as our redeemer?
Father, how wonderful your care for us!
How boundless your merciful love!
To ransom a slave, you handed over your only Son.

The original version of this article appeared in The Catholic Herald.

Reflections on the Feast of the Ascension