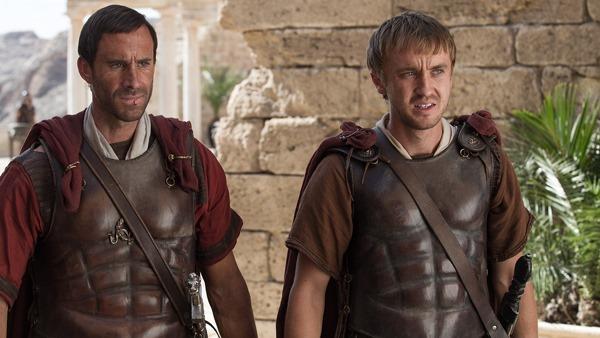 In any film, play or re-enactment of the passion and resurrection of Jesus that I have ever seen, it’s far easier to convey the drama and cruelty of Christ’s sufferings than the glory and joy of his rising. It’s as if our imaginations function overtime in conjuring up the worst we can think of, but simply down tools when we try to imagine the best. Kevin Reynolds’s Risen is no exception, though at least it avoids the hilarious bathos of The Greatest Story Ever Told with its disciples running round in arm-waving circles to the sound of the Hallelujah Chorus. Reynolds manages a degree of dramatic tension instead by setting this as a CSI-style detective story in which Joseph Fiennes’s battle-weary Roman tribune Clavius runs against the clock of a political and increasingly personal dilemma.

Charged by Pontius Pilate with finding out what has become of Jesus’s body, reported missing in the aftermath of the crucifixion, Clavius’s initial aim is to avoid the political embarrassment that could bring both their careers crashing down as a state visit by Emperor Tiberius looms. Anyone familiar with his Harry from Spooks will recognise Peter Firth’s cynical, edgy Pilate, a growling politico, unimpressed by the religious manoeuvring of the Sanhedrin but aware of the potential disaster this body snatch represents. The first part of the film plays well, with some truly disgusting scenes of corpse exhumation and a touching performance by Antonio Gil as a broken and bewildered Joseph of Arimathea. The addition of Tom Felton as Lucius, Clavius’s eager young sidekick, makes it hard not to think of them as Lord Voldemort’s younger brother in pursuit of Harry Potter with Draco Malfoy at his elbow, but the drama is convincing enough and there is a memorable cameo from Richard Atwill’s Roman soldier, witness to an event he cannot begin to get his mind round and going on the bender of all time as a result.  So far, so reasonably enjoyable. What strikes an incongruous note is Stephen Hagan’s Bartholomew, played like Tigger on amphetamines. He is exactly the kind of swivel-eyed evangelist you dread meeting on a train or having turn up at your front door. And this is where the film shows its weak spot. The world of the secular non-believers holds its own, whereas the world of faith is at best gently melancholy, at worst wildly ludicrous. Women followers barely get a look-in (this at least is true to form), with Margaret Jackman’s blind Miriam more arresting than Maria Botto’s dewy-eyed Mary Magdalene. The men do little but smile enigmatically or gurn with terrifying enthusiasm.

This is probably not the fault of the actors’ performances. Maori Cliff Curtis is handsomely poised as Jesus and is a thoughtful if underwhelming presence. Stewart Scudamore’s Peter has moments of vividly human reaction. Clavius is a decent man, increasingly drawn in by the clash of impossibilities presented to his understanding, and we care what becomes of him. But as in Yeats’s poem, if some of the enemies of faith are full of passionate intensity, the believers tend to lack all conviction, and this is the true dilemma of many scripture-based films. Looking at accounts of the passion filmed decades ago, or some recent ones from hard-line evangelical sources, the acting and writing is clunkily awe-struck, the actors moving like stiff religious dummies, spouting heavy scriptural dialogue at one another with not an ounce of human credibility. More recent ones do better on showing familiar scriptural figures as compellingly human, but have little idea what to do with making their faith coherent. If they are persuasive as human beings, their faith becomes an embarrassed mumble or a vague look into the distance. If their faith is substantial, it’s usually at the cost of their humanity.

Roman Clavius unconvincingly goes on the run with the Jewish disciples (Simon the Zealot might have had something to say about this, one presumes), ending up in Galilee, where at last he gets to speak with Jesus. ‘What are you afraid of?’, asks Jesus. ‘Of being wrong’, Clavius replies, and there, as it were, is the crux of the matter. He can’t live with the knife-edge uncertainty that most believers live on, so he ends up meandering aimlessly into the desert and the film ends inconclusively both dramatically and theologically. That, perhaps, is where things are these days. No one has entirely resolved the problem of how to convey the death and resurrection of Christ on film without it failing either at a human/dramatic or at a religious level. Perhaps St Ignatius of Loyola had it right in his Spiritual Exercises and this is best left to the imagination.