Skip to main content
Photo by qbix08 at flickr.com 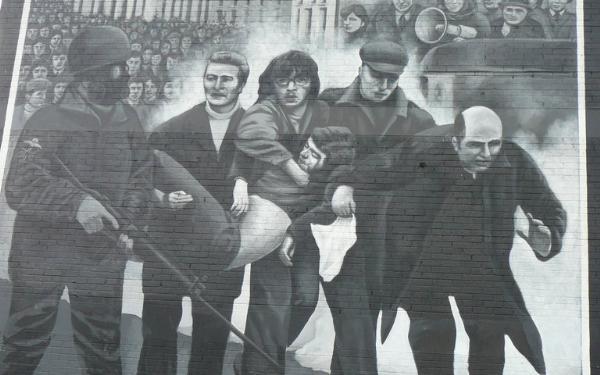 David Cameron last week issued an apology on behalf of the Government following the report of the Saville Inquiry into the events of Bloody Sunday. Irish Jesuit, Brian Lennon, who has worked on peace issues in Northern Ireland for nearly 30 years, looks at the responses to this apology and at the light it sheds on recent British history. What lessons can and must be learned from the ‘unjustified and unjustifiable’ events of nearly 40 years ago?

The Saville Inquiry into Bloody Sunday, 30 January 1972 – when British paratroopers killed fourteen Civil Rights marchers in Derry – finally reported on 15 June 2010. It is a report about the past, but it may help us towards the future.

Immediately after the killings, the whole of nationalist Ireland erupted. The British embassy in Dublin was burnt to the ground, there were calls for the Irish army – such as it was – to be moved to the border, and an international campaign was begun by the Irish Government to condemn the British. IRA recruitment soared.

For their part, the British Government’s propaganda machine went swiftly into action with the appointment of the Widgery Inquiry which reported within eleven weeks. It found that the soldiers were fired at first. Saville found the opposite. Widgery believed the account given by the soldiers; Saville did not:

We have concluded … that … many of these soldiers have knowingly put forward false accounts in order to seek to justify their firing (Saville 2.82).

For the relatives of the dead, the Saville Report was vindication: their loved ones were not gunmen. They were innocent. They were wrongly killed. This was an outcome for which they had been struggling for nearly 40 years. A less clear-cut conclusion about the innocence of the dead would have been a crushing blow for the relatives.

The UK Government lied systematically for nearly forty years about Bloody Sunday. Widgery was designed to defend the Parachute Regiment. In war, as in life, the public quickly lose interest in a story, so the first headlines are vital for propaganda. On this basis, Widgery succeeded: the line believed across much of the UK at the time was that the army was attacked by the IRA.

But propaganda has its price. It undermines the moral basis of the State, both internally – because many insiders know the extent of lies – and externally. Ordinary people are ashamed to learn that their army, without reason, killed fourteen innocent men.

Responding to the Report, the Prime Minister, David Cameron, apologised on behalf of the country in the House of Commons on Tuesday 15 June:

The conclusions of this report are absolutely clear. There is no doubt. There is nothing equivocal. There are no ambiguities. What happened on Bloody Sunday was both unjustified and unjustifiable. It was wrong. Some members of our armed forces acted wrongly. The Government is ultimately responsible for the conduct of our armed forces and for that, on behalf of the Government – and indeed our country – I am deeply sorry.

It is one of the what-might-have-beens of history to ask what would have happened in the years that followed had Saville reported and the apology been given in 1972. As it was, the killings slotted into the opposing views of ‘British imperialists attacking freedom fighters’ on the one hand and ‘terrorists attacking a legitimate state’ on the other. The cycle of violence trundled on for over thirty years.

For Republicans, Bloody Sunday in part justified their violence against British oppression and their continuing campaign to expose other state injustices. Gerry Adams quoted one of the relatives the day after the Saville Report: ‘the Parachute Regiment are the frontline assassins for Britain’s political and military elite.’ For Adams himself, ‘Bloody Sunday is the defining story of the British army in Ireland.’

His view overlooks the fact that the IRA were responsible for approximately 1,800 deaths in the Troubles, about 49%, and were never supported by the majority of Nationalists, let alone the rest of either Northern Ireland or the whole of Ireland.

Further, it was clear at the Saville Inquiry that the IRA were not at all anxious themselves to tell the truth. Martin McGuinness was reprimanded for refusing to answer questions about IRA arms dumps, telling the tribunal that he would rather die than break the ‘IRA honour code’. The full truth of many killings has yet to come out. If Republicans want the British Government to tell more of the truth then they need to do the same themselves, and they also need to apologise for outrages. They do not need any commission to do that. They can communicate the truth about their killings confidentially through intermediaries whenever they choose to do so.

Some Unionists cannot understand why such a fuss is made when Nationalists are killed when there is very little, apparently, over the death of their loved ones. Others, like Lord Tebbit, whose wife was seriously injured in the Brighton bomb, want inquiries into the atrocities in which their loved ones suffered.

Yet the killings on Bloody Sunday were done by State forces. Killings by the IRA, in Unionist ideology, were carried out by terrorists. Terrorists are ordinary criminals and should therefore be tried by the courts. From that point of view there is no need for inquiries. The courts should be sufficient.

Behind this view lies a deeply-held moral position that the terrorists are unrepentant sinners. For many this means that the Belfast Agreement of 1998 which allowed Sinn Fein into government must always be flawed.

But what happens to this view when a duly appointed government representative, like Lord Saville, finds that in fact it was soldiers acting on behalf of the State who carried out the unlawful killings? Does that not undermine the legitimacy of the government, especially in the light of forty years of lying about the event? Or does it not at least introduce the concept of degrees of legitimacy, which in turn might lessen moral superiority?

Other Unionists have responded differently. Protestant Church leaders, for example, gave inspiring leadership by walking to the Bogside to be greeted by the families and Catholic Church leaders, including Bishop Eddie Daly, at the monument to those who had been killed. That walk was a symbol of the improved inter-church relations in Northern Ireland.

From the past to the future

I hope that the families of those who were killed, who have spent so much time and energy focusing on Saville, may now find freedom to move on.

The British Government’s apology has been full: there were no ifs or buts about it. Nationalists and Republicans need to recognise that it was not easy for the Government to do this. The apology changed the meaning of Bloody Sunday. It meant that at last those who had suffered had been listened to, had been heard and had been recognised. This matters to people who have been treated unjustly. Yes, Bloody Sunday was an outrage, but it is now an outrage that has been admitted. Responsibility for it has been taken, repentance has been expressed.

However, there is a hard, if not new, lesson for the Government to learn, not only from Bloody Sunday, but also from the legal corruption shown over the Birmingham Six, the Guildford Four and other cases. In all these the accused were wrongly held in jail for so long in part because the British political, legal and military establishment could not face the ‘appalling vista’ (the words of Lord Denning) that the State lied systematically. But the State had lied.

If this happened in the past, it can happen again. British forces are currently engaged in Iraq and Afghanistan. Whatever the merits of these wars, the soldiers taking part are doing so on behalf of the State. That means we need to ask ourselves about the conditions in which they are being asked to fight, the training they receive, the standards that are set, the psychological aid that is available for unavoidable trauma and the independent oversight of their actions. Saville tells us not only about our past. It raises questions about our present.

Two other approaches, neither perfect, might be of help. One is to hold a few more inquiries similar to that conducted by Dame Nuala O’Loan into collusion between the security forces and Loyalist paramilitaries in North Belfast. This inquiry was short, economical, and it exposed the depth of collusion between some in the security forces and Loyalist paramilitaries.

A few similar inquiries would undermine further those who try to claim the high moral ground by defending the Government. Equally important, however, such inquiries would likely expose further the extent to which British intelligence penetrated the IRA. That might reduce the enthusiasm of Republicans for trying to present the past as a great struggle for Irish freedom.

The outcome would be to show all sides the past for what it really was: a bloody, useless, messy, sectarian mess, as well as being the result of colonialism. A few further sample inquiries would also vindicate a few more innocent people.

Normally, I am not enthusiastic about group apologies or forgiving in Northern Ireland for the simple reason that most of the time we cannot agree about right and wrong in relation to the past. Bloody Sunday is an exception. The Prime Minister’s apology and the response of Protestant Church leaders has made an impact. It would be good if some common moral assessment could be made about some other terrible events in our past.

That will certainly not happen without story telling between people who suffered in the conflict. That is a second approach that can help us to move forward.

Only recently I was told of a Derry nationalist who, through a long conversation with a former Marine, heard for the first time what it was really like for him to work as a British soldier in Republican areas. That changed her understanding.

Each story that is told undermines propaganda, complicates headlines, humanises the situation, and increases understanding.

That is why we need more stories.

Brian Lennon SJ is author of: Catholics and the Future of Northern Ireland (Dublin: Columba, 1995), Peace Comes Dropping Slow: Dialogue and Conflict Management in Northern Ireland (Belfast, Community Dialogue, 2004) and So You Can’t Forgive? (Columba Press, 2007). He is based in Armagh, where he works for Dialogue in Diversity.

After the Ceasefires: Catholics and the Future of Northern Ireland

So You Can’t Forgive?