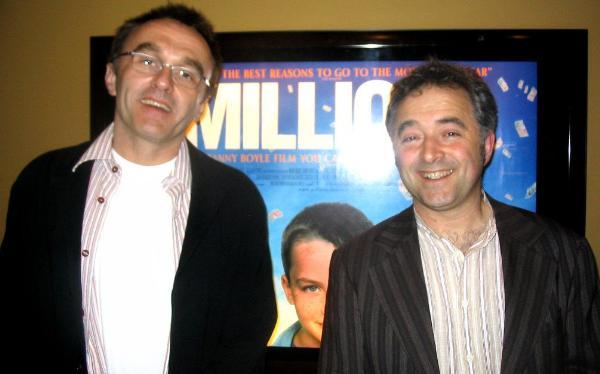 When Oscar nominee, Colin Firth was asked to guest-edit the Today programme on BBC Radio 4, he wanted to look at the sometimes complex relationship between faith and film. Who better to talk about this than renowned screenwriter, Frank Cottrell-Boyce? The writer of several films, including Hilary and Jackie and Welcome to Sarajevo, describes what it is like to be a Catholic in the film industry.

Cinema and religion are completely – in fact, architecturally – tangled up in my head. That’s largely because my Dad used to take me to a city centre cinema which later became a Church but kept the cinema seating. So to this day I will sometimes find myself spilling my popcorn as I absent-mindedly genuflect at the end of Row H in the Plaza, or sitting in Benediction, looking at the altar, waiting for the trailers to start.

My Church – I’m a Catholic – has a long love affair with cinema. Scorsese, Capra, Hitchcock all explored their faith on screen, as did the mighty Leo McCarey, the man who put Laurel and Hardy together. At Mass once during the Cannes festival, the priest clocked my ‘In Competition’ accreditation and lifted a complimentary eyebrow as he gave me communion.

If I was a practising Jew or a Muslim I could probably come up with the same stories. In the end, you make cinema by putting ordinary people in an extraordinary light – well, that’s what faith does. Cinema was made for transcendence. Even today, one of the biggest franchises is The Lord of the Rings – profoundly Catholic – and another is Twilight – profoundly Mormon, of all things.

It’s taken me a long time to know what to do with my faith when I get to work. When I worked on soap operas, I used to really enjoy writing the Catholic characters in but then I realised that they were hostages to fortune. So, I would bring in a nice, intellectual, working class, Spencer Tracy of a priest; then I would go on holiday, come back and find out that he was trying to ban dancing or was up on a murder charge.

Screenwriting is a highly conventional business. Screenplays are 105 pages long; there are three acts, a hero journey and a moment of redemption at the end. These conventions are taught as though they were purely pragmatic, but of course they embody a very specific set of values that I just don’t happen to share. So it’s made me more questioning I think. Or sometimes it does. I did find myself recently working on a script about St. Paul and thinking, ‘That conversion on the Road to Damascus, that comes a bit out of the blue, I probably need to set that up a bit’. I made a film called Millions about a boy whose mother died but who found he could converse with saints. Lots of people – not the director, Danny Boyle by the way – said the boy needed to find closure on this and move on; whereas I thought he was in a pretty good place actually, that he’d found an ideal solution. Conventional storytelling is all about consequences, about the merciless chains of cause and effect; but the great religious stories – The Prodigal Son, for instance – are about how mercy and grace will cut you free from those chains. I believe strongly in unearned surprises and discontinuous glories. So there is a conflict, but it is a creative one.

In the end, I think the biggest thing my faith has given me is a strong idea of why I’m doing this. I have a quote from Jesse Owens, the great athlete – the greatest athlete – over my desk. He said his job is to point to what is good, to showcase what is good, so that people can know that life is good.

Frank Cottrell-Boyce has been writing screenplays and novels for over 25 years. His credits include: Millions, 24 Hour Party People, God on Trial and Coronation Street.

This text was delivered on BBC Radio 4’s Today programme on 28 December 2010.