Skip to main content
Photo by Magis 2011 at flickr.com 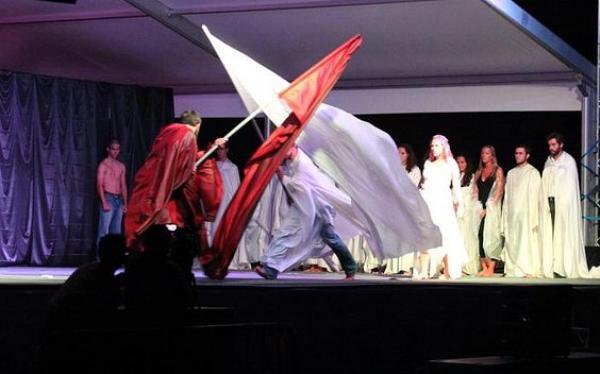 In the Spiritual Exercises, St Ignatius places before us a fundamental choice between the way of Lucifer and the way of Christ. The Meditation on the Two Standards offers us a means of imagining these two ways of life competing for our commitment. Roger Dawson SJ explores the decision that we are confronted with in the meditation: what is at stake for us in choosing between the two standards?

Several years ago, before I joined the Jesuits, I was on holiday visiting my brother and sister who live in the United States. When I was coming back I checked in at the airport a few hours before my flight departed and said to my sister that I had not bought a pair of Levi’s, which are much cheaper in the USA than in Britain. She said to me, ‘Well, there’s a shopping mall only a few stops on the subway from here. We can just about make it.’ So we set off, knowing that we were fairly tight for time, to try to buy a pair of Levi’s. When we got there we were in the lift and there was a poster advertising gift vouchers that could be used in the mall. On this poster was written: ‘Give them exactly what they want’.

In the Spiritual Exercises of St Ignatius there is a meditation called, ‘The Meditation on the Two Standards’. This is part of the 30 day silent retreat which every Jesuit makes twice before he is fully accepted into the Society of Jesus, and that many non-Jesuits and lay people these days make as well. In the Two Standards Exercise, Ignatius sets before us a dramatic image. On the one side he puts Jesus, and on the other side he puts Lucifer, the ‘enemy of our human nature’. He sets Lucifer on the great plain of Babylon and paints a picture of him sitting on his throne amidst fire and smoke, surrounded by his demons and instructing them to go out and convert the world to his cause. He tells them to do this first of all by getting people to crave wealth, or if they are already wealthy, to get them to cling to their wealth. Then they are to get people to rely on the honour and status that wealth gives them. And finally from there it is an easy step to get people to become proud – by establishing a sense of absolute independence, a conviction that I do not need anyone else; that I have made it and have no need of God. From pride, Lucifer is able to lead people ‘to all other vices’. In other words, he is able to trap them and enslave them. There is a contemporary version of the Two Standards that I read a while ago in which the first thing that Lucifer instructs the demons to do is to ‘give them exactly what they want’: everything they ask for, give it to them; don’t hold back on anything.

This is one of the Two Standards. The other ‘standard’ that Ignatius puts before us is that of Jesus. How does he work and what strategy does he use? Jesus tells his disciples to convert the world to him by first of all, ‘drawing people to the highest spiritual poverty’. In other words, we should not look to wealth and status for security, but to God. If we have possessions, those possessions are only to be used in so far as they help us to be closer to God. Jesus also tells the disciples possibly to ask us to desire material poverty as well, because that is the way in which he lived, and we can thus imitate Jesus and identify more with him. So, first, spiritual poverty and possibly material poverty. Secondly, he tells the disciples to get us to accept and even desire the insults and contempt that the world offers us because we are Christians. From there it is an easy step to the third stage of humility. Humility does not mean craven self-abasement but, as the anonymous author of The Cloud of Unknowing puts it, it is seeing ourselves as we are. Humility ensures that my being is centred on God rather than myself and reminds me that God is the centre of the universe, not me. Through humility we acknowledge our need for and dependence on God and from here, Ignatius says, we are led ‘to all other virtues’.

Imagine for a moment that you work in advertising or marketing and you have got to promote this. How do you sell Jesus’s message? How do you get people to ‘buy’ this – to desire spiritual poverty, or material poverty; to ask for contempt and insults from the world; to seek humility? In marketing terms it seems not just impossible, but absurd. On the other hand, what Lucifer offers seems far more attractive: honour, status, wealth, power, admiration – being given exactly what we want. Who in their right mind would say ‘no’ to that?

Ignatius is showing us in this meditation that what seems attractive can lead us nowhere or, worse, can even destroy us. In the Book of Deuteronomy, Moses says, ‘I set before you life and prosperity, death and disaster, blessing or curse. Which do you choose?’ Moses says, ‘Choose life’ and paradoxically so does Jesus: even though it seems strange and unattractive, his way in fact leads to life. The two ‘standards’ are two banners, and Ignatius is asking us, which banner do you stand beneath – the banner of Lucifer or the banner of Jesus? Whose kingdom am I going to work for – my own or God’s? Are we going to build Babylon or a New Jerusalem? He puts before us two value systems and places in stark contrast the values of Jesus, who leads us to God and life, and the values of Lucifer, the Enemy who leads us away from God and our true selves. Ignatius is saying that these two sets of values are in opposition to one another, that we cannot have both, that we cannot worship both God and Mammon, that we cannot make both ourselves and God the centre of our world. This exercise forces us to choose.

Moreover, we need to recognise that these forces are active and at work in our world today, just as much as they were in Ignatius’s world of the 16th century. Authentic spirituality requires us to be dedicated to reality at all costs – to see things as they are, to be aware and consciously self-honest. Most of us realise that we can be very creative at times and very destructive at others; that we can be both big-hearted and mean-spirited; that our belief in ourselves grows sometimes, at others it diminishes; that some things draw us closer to God, others turn us away from God and in on ourselves. Ignatius attributes this to the ‘good spirit’ and the ‘bad spirit’ and we need to be aware that these two forces are operating and that both of them for different reasons can be extremely attractive. This meditation makes us confront the whole question of where our allegiance lies and in dramatic form puts before us a fundamental decision: I have a choice, and I need to make a choice. It is a choice that we face not just once in the Spiritual Exercises, but frequently in our decisions, in our daily lives. Even though it does not look at all attractive initially, the choice to stand with Jesus is a choice for life, as opposed to death, for God’s blessing rather than curse.

In addition to the importance of this choice, Ignatius also presents to us the nature of the Enemy. Lucifer means ‘the light bearer’, but the light he bears is false light: what he offers is very plausible and attractive but ultimately destructive because it destroys our freedom. It traps us into a certain way of living, an attachment to things that we believe we must have in order to be happy. In the Two Standards we are also being asked: from where do I get my identity? Much of contemporary advertising works by making us feel worthless and inadequate. We are told, ‘If you haven’t got this, then you haven’t really made it, you’re a nobody. If you do get this, you will be somebody. People will admire you, respect you, love you and care about you.’ Similarly Lucifer works by moving us from having the possessions and saying, ‘This is mine’, to putting not just our trust but also our identity in possessions, status and wealth: ‘Look at me, look at my house, look at my clothes, my car, my job, my pay cheque. I’ve got this. I am rich, powerful and important, therefore I am worthy of respect. I am somebody.’ Once we believe that we are somebody because of all these things, we end up with a false sense of our value and worth. We move from possessing things to being possessed by things. Ultimately these things cannot deliver. Lucifer tricks us into putting our trust in something other than God and that ‘something else’, whatever it is – money, status, intelligence, independence, power – if it is not God, will ultimately fail us. Our true sense of our value and worth comes from knowing that we are loved and cared for by God, whatever happens or whatever we do. Only God is not going to disappoint us, let us down, die on us, abandon us or stop loving us.

In contrast to Lucifer, Jesus does not trick or seduce us, but invites us and frees us. Even though it seems paradoxical, he is the Way, the Truth and the Life. We see this paradox throughout the Gospels: he calls us into poverty, to take up our cross every day and to renounce ourselves. He tells us that if you really want life you are going to have to lose your life and if you want genuine richness you have to be poor. It may be challenging, but once we make that step, then we begin to share in the richness of God and to see that all we have in this world is given to us by God. When we appreciate these gifts as gifts, rather than something to which we are entitled, we can learn a genuine sense of gratitude, wonder and awe for these gifts, and we can begin to realise that the only possession we ever need is God. In this relationship I see myself as I really am and more importantly know that I am loved for who I am, not because of status, title, job, money or possessions – none of these lasts and ultimately none of these matters. That is what the Meditation on the Two Standards is showing us.

By the way, I did catch the plane and I did get the Levi’s. But they wore out and I threw them away a long time ago.