Skip to main content
Photo by Kevin H at flickr.com 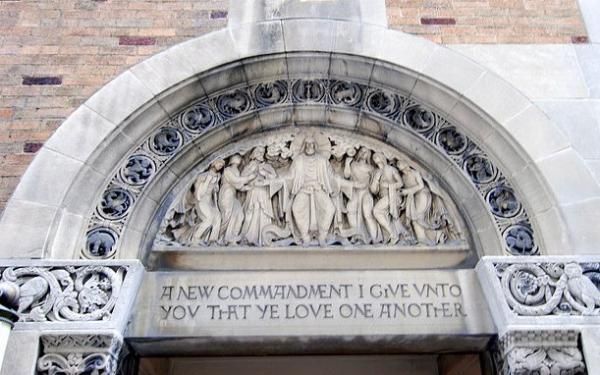 After examining how Jesus understood and talked about the Ten Commandments, Jack Mahoney turns his attention to the ‘new’ commandment that Jesus gave to his disciples, which we find in John’s Gospel. What was new about what Jesus was asking with his instruction to ‘love one another ... as I have loved you’?

The discourse of Jesus at the Last Supper as presented in John’s Gospel has enthralled readers, and yet also mystified them. Like other discourses of Jesus in the fourth gospel, the text contains puzzling breaks, interruptions and repetitions. Of several explanations proposed for the strange structure, Raymond Brown adopts the comparatively simple one of postulating that it was edited twice by the evangelist and then reworked by another person in the Johannine community.[1] One result is that sometimes two versions of the same unit are printed side by side in slightly different settings aimed at meeting different situations, a practice of doubling passages rather than preferring one with which we are familiar in the Pentateuch. Brown notes that ‘what is said in the Last Discourse in xiv 1-31 is largely said all over again in xvi 4-33’.[2] And Perkins suggests that the discourse material ‘appears to have been expanded during the editing of the Gospel, and may well represent different situations in the later history of the Johannine community’.[3]

As an example of all this, it is interesting to note that in the course of his Last Supper discourse, Jesus instructs his apostles in two separate places to love another as he has loved them, and that the context differs in each case. The first passage is found in Jn 13:33-36:

‘Little children, I am with you only a little longer. You will look for me; and as I said to the Jews so now I say to you, “Where I am going, you cannot come.” I give you a new commandment, that you love one another. Just as I have loved you, you also should love one another. By this everyone will know that you are my disciples, if you have love for one another.’ Simon Peter said to him, ‘Lord, where are you going?’

Perkins observes that ‘the commandment fits awkwardly into this position, since what follows deals with the theme of Jesus’ departure’.[4] But the location of the commandment appears deliberate here. The context of Jesus’s forthcoming departure seems to be the reason why he is here giving his apostles the command. The implication is not that their love for each other should be as great as that of Jesus for them all (i.e., to the measure with which I have loved you), but that, for this new situation when their Lord will have left them, it is appropriate that he gives them a new commandment: just as he has loved them while with them, likewise they are henceforth to stand in for Jesus in their love and care for one another. One of the purposes for which the Gospel of John seems to have been was written was to attempt to resolve painful divisions which existed within the Johannine community (as we see in the First Letter of John). The evangelist therefore may have Jesus here exhorting all his future disciples to mediate his continuing love to one another after he has gone, and so maintain the unity he will pray for earnestly.

This is the only passage in John’s Gospel (Jn 13:33-36) in which Jesus actually calls this the ‘new’ commandment that he is giving the apostles. In the second passage where Jesus commands his disciples to love one another ‘as I have loved you’ (Jn 15:12-17), he does not refer to this as a ‘new’ commandment. The later context is not the forthcoming departure of Jesus, but his giving his life for his disciples, and offering them this as an example of how completely they are to devote themselves to one another in the future (Jn 15:12-17): ‘This is my commandment, that you love one another as I have loved you. No one has greater love than this, to lay down one’s life for one’s friends…. I am giving you these commands so that you may love one another.’

Various reasons are proposed to explain why Jesus issued a ‘new’ commandment to his followers. The simplest but least plausible reason is that he was just adding to the number of the Ten Commandments given to Israel by God through Moses. A more attractive, but still unlikely, reason was that in exhorting them to love one another he was doing little more than repeating the ‘Great Commandment’ that they love others as themselves, which we saw him propose in reply to the question about a priority among the Ten Commandments. However, the new commandment is not just that Jesus’s disciples are to love one another, but that they are to do so ‘as I have loved you’. This seems to be a major new qualification to Jesus’s moral teaching. It appears that the norm and the supreme example of Christian loving is to be the love which Jesus himself showed to, and for, his followers; and historically this will be expanded into the powerful spiritualities of the imitation of Christ and of the following of Christ. Perkins, therefore, explains that ‘this commandment is “new” because it is grounded not in the love commands of the Jewish tradition (e.g. Lev 19:19; 1QS 1:9-11) but in the self-offering of Jesus’.[5]

This ‘new’ commandment, however, is sometimes considered to be surprisingly exclusive, and seems to differ from the Great Commandment in enjoining the disciples just to love each other, rather than to love all their neighbours. However, it is worth bearing in mind that Jesus’s Last Supper discourse in John’s Gospel sometimes looks forward to the coming passion and death of Jesus, and at other times it seems to look back from after the Resurrection to Jesus’s having completed his task, so that, as C. H. Dodd once explained, ‘in a real sense it is the risen and glorified Christ who speaks’.[6] This perhaps enables us to understand why the commandment to ‘love one another’ seems almost exclusive, as one to be observed only among the disciples, in contrast to the Great Commandment which enjoins that one should love of all one’s neighbours without exception. In this discourse, it is as if the risen Christ is addressing the community for which John was writing his gospel, and is instructing it on how to handle its problems and issues. Just as in any society, repeated legislation forbidding a particular piece of behaviour indicates the prevalence of such behaviour in that society. John in his gospel and his letters (as their author or their source) writes so repeatedly of the need for mutual love and unity among the disciples of Jesus, that it seems likely that these virtues were notably lacking in John’s Church, and that the Last Supper discourse is a plea from their risen Lord to remedy this sad situation.

The law of the new covenant

Finally, a very attractive interpretation links the ‘new’ commandment with the new covenant. As Raymond Brown observes, the evangelist shows that in speaking of love as the new commandment, ‘he is thinking of this Last Supper scene in covenant terms’.[7] As we saw previously in examining the Ten Commandments, covenant and commandments are closely connected: ‘The Lord said to Moses: Write these words; in accordance with these words I have made a covenant with you and with Israel. . . And he wrote on the tablets the words of the covenant, the ten commandments’ (Ex 34: 27-28; cf Dt 4:13). Israel’s side of its covenant with the Lord was to obey the Lord’s commandments faithfully, in return for which the Lord would continue to protect and favour his people up to and into the Promised Land. However, as a result of Israel’s regular infidelity to the covenant even in the desert and subsequently in the Promised Land, God eventually allowed Israel to be conquered and transported into exile, after which the prophets began to speak of another covenant which God would make with his faithful chosen people:

This new covenant between God and his chosen people, foretold by Jeremiah, is none other than the one which Jesus claimed to be inaugurating at the Last Supper, when according to Mark, he took the cup of wine and proclaimed, ‘This is my blood of the covenant, which is poured out for many’ (Mk 14:24), repeated in Luke, with the words, ‘This cup that is poured out for you is the new covenant in my blood’ (Lk 22:20; cf. 1 Cor 11:25).

The Second Vatican Council connected the new covenant with its new commandment as follows, in its Decree on the Church, after quoting Jer 31:31-34,

Christ instituted this new covenant, the new testament, that is to say, in his blood (cf. 1 Cor 11:25), calling together a people made up of Jew and Gentile, making them one, not according to the flesh but in the Spirit. This was to be the new People of God…Its law is the new commandment to love as Christ loved us (cf. Jn 13:34). Its end is the kingdom of God, which has been begun by God Himself on earth, and which is to be further extended until it is brought to perfection by Him at the end of time.[8]

Jesus is thus the divinely appointed mediator, and indeed author, of the new covenant (Heb 12:24), and just as the Sinai covenant mediated through Moses contained the Ten Commandments as an integral part of God’s will, so here also the new covenant requires a new commandment as its basic law. The other contracting party, the new people of God, are now to love one another as Jesus has loved them. ‘The model of the disciples’ love is Jesus’ supreme act of love, his laying down his life’.[9] This will be definitively enacted when the departed Jesus sends his Spirit to form the new covenant community, Christ’s Church. Then from the love that they show each other they will be recognisably distinct, and ‘everyone will know that you are my disciples’, as Jesus foretold (Jn 13:35).

Jack Mahoney SJ is Emeritus Professor of Moral and Social Theology in the University of London, and a regular writer for Thinking Faith.

The Appearances of the Risen Lord

St Henry Morse SJ: ‘A saviour of life unto life’
Alfred Delp: committed to Christ
‘The Fight Between Carnival and Lent’
Ignatius and the Stars
The Secret Life of Walter Mitty