Skip to main content
op Koriyama greets Judith Callaghan and Jane Sander on the piazza of the Cathedral of St Francis Xavier, Kagoshima. 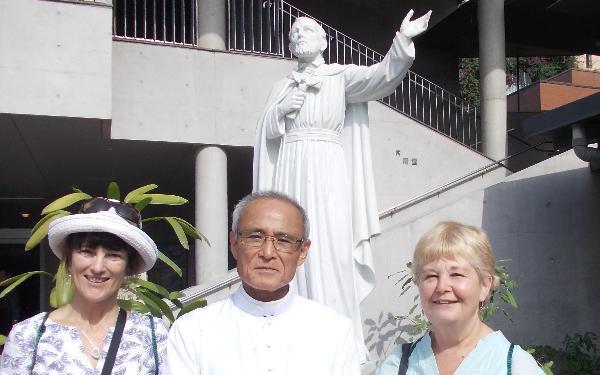 The Jesuit church in Liverpool is dedicated to St Francis Xavier, the sixteenth-century Jesuit missionary whose Feast is celebrated on 3 December. Parishioner Judith Callaghan recently travelled to the city of Kagoshima in south Japan, where she visited another parish of St Francis Xavier and was delighted by the reception she received from the community there. What did she learn about Xavier’s legacy in Japan?

St Francis Xavier spent two years in Japan from 1549-51. I bet he was curious
as he sailed into the port of Kagoshima, on the island of Kyushu in south
Japan. He had been at sea for almost four months and had been planning his
journey since first hearing about the ‘island’ of Japan two years previously.
As one of the founder members of the Society of Jesus (Jesuits), his purpose
was to extend his mission in the East by introducing Christianity to the
Japanese people. In his seven years as a missionary in southern India and
Indonesia, he had made fast progress and established firm bases. He was eager
to extend Christianity and had heard that Japan was an interesting but isolated
country with a sophisticated culture of its own.

I bet the Japanese were curious about him too, one of the first Westerners they
had ever seen. Most people welcomed him so they could learn more about his part
of the world and make the most of what he had to offer, especially trade
possibilities. Some were far more reticent, either fearful of difference or
wary of how his ideas might disrupt their way of life.

In the two years he was in southern Japan he converted many people to
Christianity but because of language difficulties the new Christians’
understanding was not always quite correct. The Saint left unfinished business when
he departed Japan.

Within decades of his departure, persecution
of Christians in Japan was rife and those that survived followed their religion
in secret, fearing for their lives. Japan then became a closed nation for over
200 years, rejecting all foreign influences. Only the Dutch were allowed to
continue to trade from a tiny island in Nagasaki harbour, from which they had
no access to the mainland.

But the seed was planted. In the 1860s, after Japan had
opened its doors again to outsiders, a Catholic church was built in Nagasaki,
also on the island of Kyushu. Within weeks, a small group of locals introduced
themselves to the priest there, Fr Petitjean, saying, ‘We have the same feeling
in our hearts as you do. Where is the statue of the Virgin Mary?’ They told him
their ancestors had followed their faith secretly over the centuries together
with thousands of others, who then emerged from their hidden communities. The
curiosity and welcome of the Japanese encountered by St Francis Xavier in the 16th
century had born fruit.

Curiosity and welcome – the first a gift and the second a ministry. On the face
of it they are simple things, but both are so important in spreading the faith
community. Here is an example: recently, my friend and I planned a holiday in
Kyushu. We included the city of Kagoshima for two reasons: the guide books gave
it a good press; and they included references to St Francis Xavier’s Church in
Kagoshima. So, as parishioners of St Francis Xavier’s Church, Liverpool, we
thought it would be interesting to visit the church of the same name,
especially because it was an important place in ‘our’ Saint’s mission.

We put together a greetings card and information pack before we went. About 50
Liverpool parishioners signed the card and were curious about our proposed
visit to a part of the world not on the general tourist trail. When we arrived
in Kagoshima, we went to the church to find out Mass times. It was a Saturday
morning and there were a few people there doing jobs, a couple of whom could
speak some English. They were curious about our reason for coming to their
church. We were coming towards the end of our holiday and had seen no other
English people, so we were a bit of a curiosity. One of the parishioners put
his work to one side and gave us an enthusiastic and detailed tour of the
church. We were really touched by the warmth and interest with which we were
greeted. After all, they had not expected us and probably had their precious
Saturdays planned carefully. We looked forward to going back the next day for
Sunday Mass.

We got there early so that we could hand over the greetings pack, now confident
that our preparation in Liverpool would not be wasted. On the sunny patio
outside the church, we saw a desk and a smiling welcomer. He asked us to sign
his visitors’ book and include the name of our parish. This was done with
minimal language on both sides. We gave him the greetings card and information
from Liverpool SFX. He got a bit confused and started to sign the card, until
another parishioner with some English intervened! We went into Mass pleased
that we had accomplished our objective.

As the only Westerners present, we were the subject of gentle curiosity, more
smiles and bows. Mass was, of course, in Japanese. No problem: Mass is Mass
wherever you are in the world. Except the homily! This one, although
unintelligible to us, was very entertaining. The priest was clearly amusing and
the atmosphere was lovely; the feeling of community was palpable. Our
neighbours made sure we had the right books, leaflets and hymn numbers. At the
end, various people come to the front to make announcements. The welcome person
displayed our card and our neighbour told us that we were being introduced and
asked us to stand up. We got a round of applause and then an invitation to
coffee after Mass. We did eventually have that coffee but not for some time. A
succession of parishioners came to tell us that they had been to England or
that a member of their family was studying or working there. Then we met the
celebrant who turned out to be Bishop Koriyama, the church being a Cathedral.
Both he and the parish priest spoke English. Our mutual curiosity and an
extended photo session in the sunshine with an ever-increasing group of jolly
parishioners meant that we were last in for coffee – and sweet potato biscuits,
a local delicacy. Here we found more new people to talk to with questions being
fired off from both sides. Interestingly, they were surprised to hear that
there were many Catholics in England and that we knew quite a bit about ‘their’
Saint.

Again, we were overwhelmed by their openness to us and their willingness to
give us their time. They were so ready to engage with us in a warm and
constructive way; sadly, this is not always a given when visiting other
churches in this country or abroad.

In the church shop, amongst the usual range of medals and spiritual books, we
found a traditional Japanese Manga comic about the life of the Saint. We left
via Xavier Avenue and walked through Xavier Park, filled with memorials to the
Saint and his compatriots. In secular museums in both Nagasaki and Kagoshima we
found prominent references to the Saint as being a key person in opening up
Japan to the West. He is big news in the history of that part of the world!

Since we have been home, there have been emails between our two ‘SFX’ churches;
we have set up a display of the visit in our church; the story has been
published in The Catholic Times; and we are hoping that our two
communities will keep in touch. That has happened because on both sides of the
world we have the wonderful gift of curiosity and because in Kagoshima their
ministry of welcome was terrific!

So, apart from a nice, glowing feeling, what other benefits could there be? On
both sides the sense of the worldwide Catholic family was strengthened. In
Liverpool and Kagoshima we have learned more about one another and about our
Saint. And, hopefully, by capitalising on the curiosity of others, spreading
the story will extend that knowledge and sentiment even further.

We have certainly experienced firsthand the power of welcome. Simple things
like smiling, giving strangers time, and asking and answering questions go a
long way to building understanding and getting rid of negative prejudices. Both
before and after our holiday some older people had wondered why we wanted to go
to Japan, because of their memories of World War II. We have made a point of
making sure those people hear our very positive reactions to the modern day
Japan and its people. In these days of dwindling church attendance, constructive
curiosity and the ministry of welcome are more important than ever. Our
Kagoshima friends have set us a wonderful example to follow!

Judith
Callaghan is a fourth generation parishioner at St Francis Xavier,
Liverpool. She is a member of the group that set up The Friends of SFX, Liverpool,
in 2010.