Skip to main content
Tales from the Bridge (Mario Petrucci, 2012) 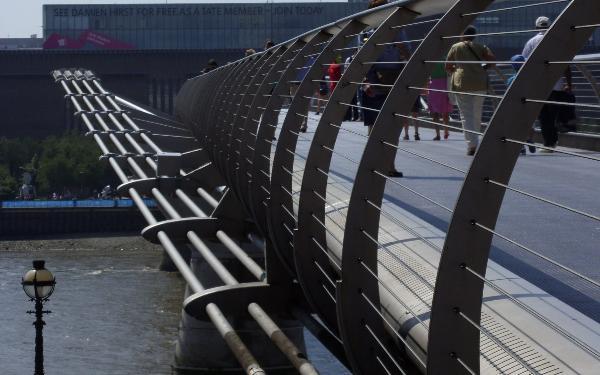 The Ted Hughes Award for New Work in Poetry will be awarded by Britain’s National Poetry Society on 27 March to a poet who has made an ‘outstanding contribution...to our cultural life’. Gemma Simmonds CJ was astonished by one of the projects nominated for the award: Mario Petrucci’s Tales from the Bridge, the world’s largest 3D poetry soundscape which was installed on the River Thames last summer. She describes how it is a prime example of the transformative power of poetry.

Most of us have snatches of poetry running through our heads. My own jumbled mental collection stretches from A.A. Milne to Adrienne Rich via Shakespeare and Hopkins. One of the few sonnets that remains indelibly etched on my brain from school poetry classes is Wordsworth’s Upon Westminster Bridge. I have a memory of standing on that bridge late one summer night, listening to the sounds of the moonlit city and reciting the words to myself as if the poem were a magic formula.

Early last summer I stood further along the Thames on the Millennium Bridge, immersed in an even more total experience of poetry. Tales from the Bridge is a vast interactive ‘soundscape’ combining a long, lyrical poem by Mario Petrucci with a score written by Martyn Ware (formerly of The Human League and now an experimental public art project soundscapist), and sound design by Ware and David Bickerstaff . Performed as an Olympic commission, Tales from the Bridge and its poetic author have been shortlisted for The Poetry Society's Ted Hughes Award, the winner of which will be announced on 27 March. The project amassed an estimated four million listeners who stood on or walked along the bridge, hearing a mantra of words and music echoing from loudspeakers as a flow of resonant sound evoked the river from multiple perspectives. This is not the first time that Petrucci has combined lyrical sound with another medium. The film of his remarkable collection of poems on the Chernobyl disaster, entitled Heavy Water, was also made in collaboration with Bickerstaff. Both collections articulate Petrucci’s background as a physicist. It is as if the very elements in earth, air and water combine in his powerful poetic evocations, full of love, rage and a deep empathy with all that is natural. Tales from the Bridge explores the role of the Thames through the words of other writers like Shakespeare, Pepys, Dickens and Eliot, whose attention has been drawn by what its waters represent. While paying tribute to the river’s metaphorical and allusive potential, the ever-practical Petrucci also evokes its history, geology and economic function. As I stood and listened on this most modern of bridges, I was struck by a sense of the river as a link through time, from its geological origins through to the role it played in the growth of the city that hugs its banks. Indigenous and invading populations lived, struggled and died as the city grew from military outpost to medieval centre of faith, polity and commerce. Its present role as one of the world’s great financial and cultural centres is still evolving. The Thames is like the sinuous spinal cord of London, and any Londoners immersing themselves in the soundscape will find themselves rapt in their own resonances as poetry and music lead them to connect with sense experience, memory and metaphor. This is what can happen if we move beyond the monotone of prose and dare to stray into the wilder music of verse.

Poets rarely achieve the superstar status of the novelists or word-spinners that feature in the easier reaches of popular culture or on our television screens. Going to a public performance of poetry is an extraordinary, challenging and often exhilarating experience. But it can feel like membership of a secret society as one gathers in church halls, arts centre basements and the backs of pubs with other intrepid souls so dedicated to words that they are willing to brave what many mistakenly see as an exclusive or rarefied art. Hearing poets like Petrucci perform their own work is a revelation. He is no novice in this art, with titles like Imperial War Museum Poet-in-Residence, BBC Radio 3 poet in residence and fellow of the Royal Literary Fund under his belt. But he and many poets like him still struggle to achieve the recognition and wider audience that they deserve. Perhaps Tales from the Bridge, tethered to the London Olympics, will have challenged the ears of the public to a different type of sound just as the Paralympics challenged us to a different view of the disabled. It is a question of exposure, which is why events like last week’s National Poetry Day are so important, as they help us to engage with words at a different level and allow them to work their magic on us.

To listen to the soundscape, or read about the project's background, see:

‘The Sermon and the Whisper’ by Nathan Koblintz on Thinking Faith

A Little History of Poetry

Grey Wisdom: not quite the last word on religious pluralism
In the beginning…
Laudato si’: a Seismic Event in Dialogue between the Catholic Church and Ecology
‘Take, Lord, and receive’: Nostalgia, truthful memory and the Great War
The breath of God: Coronavirus and theodicy