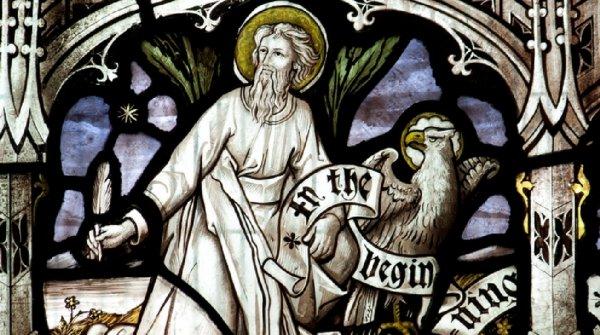 During our liturgies over the coming weeks we will hear frequently from the Gospel of John, which is chosen by the Church to ‘introduce the profound mysteries celebrated each year during Lent and Easter’. Peter Edmonds SJ guides us through the evangelist’s unique narrative and encourages us to read the whole of this ‘religious classic’ for ourselves.

‘Religious classics can prove meaningful in every age; they have an enduring power to open new horizons, to stimulate thought, to expand the mind and the heart,’ writes Pope Francis in his recent Apostolic Exhortation, Evangelii Gaudium (§256). One such religious classic is the fourth gospel, commonly known as the Gospel of John. This is the gospel from which we hear most often in the Sunday liturgies of the most solemn part of the Church’s year, Lent and Easter. Before Easter, we meet the Samaritan woman, the man born blind and Lazarus who was brought back from the tomb. In Holy Week, we hear John’s account of the Washing of the Feet and the Passion of Jesus. After Easter, we have John’s version of the finding of the empty tomb, the commissions of the risen Christ to his apostles both in Jerusalem and Galilee, Jesus’s self-description of himself as the Good Shepherd, and extracts from the long Last Supper discourse which prepare us for Pentecost. Yet if we consult the gospel itself, we realise that there are many parts which we do not hear. A positive exercise for the seasons of Lent and Easter is to read this religious classic as a whole and to make it our own. What follows is offered as a help to facilitate such a reading. We recall first how we may divide the gospels of Mark, Matthew and Luke, the Synoptic Gospels, into four parts. But gospels offer us more than the story they tell. Their story is at the service of the theology they contain, as they teach us about God, Christ, the Church and the demands of discipleship. The evangelists write as pastors to deepen the faith of their communities. We must also investigate the literary means through which they tell the story, the drama of the plot and the characters that are portrayed. Restricting ourselves to John’s Gospel, we explore the four parts of the gospel narrative which we have identified under the headings of ‘Story’, ‘Theology’ and ‘Drama’.

We repeat that the role of gospel prologues is to tell readers what they need to know in order to understand the narrative that follows. The heading of ‘prologue’ is usually given to the first eighteen verses of John, which begin, ‘ In the beginning was the word. . .’ We argue that the contents right up to 2:22 have the function of a prologue, because each part offers basic knowledge which prepares us for the events to be told in the body of the gospel. Thus, after the ‘prologue about Christ’ (1:1-18), we have a prologue about disciples (1:19-51), a domestic story about a wedding (2:1-11) and a public story about the cleansing of the Temple (2:12-22).

In these ‘prologues’, we learn theological truths. In the first, we learn about the person and career of Jesus. In the second, we reflect on the vocation and career of disciples with whom we may identify. In the third, we are taught how in Christ, the water of the past becomes the abundant wine of the present (Amos 9:13), as God remarries his people (Hosea 2:16). In the fourth, as Jesus cleanses the Temple, we see how in his own person, he replaces and brings about the fulfilment of the institutions and persons of the Old Testament.

As for the dramatic presentation of this material, we may identify the shape of the first part as that of a hymn (1:1-18), but thereafter we note how the story is told in brief paragraphs or, in technical language, ‘pericopes’, which are typical of the Synoptic gospels, but unusual for this gospel.

There are major differences in the way that John’s Gospel treats the story in the ‘body’ of the gospel in contrast to the Synoptics. We find no mention of exorcisms, no parables and only two references to the ‘kingdom of God’ (3:3,5). The subject of Jesus’s preaching is his own person, his identity and his relationship with the Father who sent him, whose character and teaching he reveals (5:19). Nor does John include what in the Synoptics are called ‘miracles’, or ‘acts of power’ (Greek: dunameis). In their stead, he presents us with a series of events which he calls ‘signs’ (Greek: semeia), which provide occasion for teaching, dialogue and at times confrontation. We have already mentioned the first ‘sign’ at Cana in our ‘prologue’ section (2:1-12). The second is the healing of the official’s son, which also takes place at Cana (4:46-54). The third is the healing of the sick man at the pool (5:1-9), the fourth the multiplication of the bread (6:1-15), the fifth the cure of the blind man (9:1-7) and the sixth the raising of Lazarus (11:38-44). This makes six, but the perfect number is seven: the seventh and final sign is his being lifted up on the cross and his ascension into heaven (chs.18-21). Whereas in the Synoptic gospels, Jesus has brief meetings with individuals and communicates in short sayings, in John we read of lengthy encounters with individuals, including Nicodemus (2:23-3:15), the Samaritan woman (4:4-42), the man born blind (9:1-41), and Lazarus and his sisters, Martha and Mary (11:17-37). These can be regarded as representative figures. In chapter 6, he has a long encounter with a crowd and chapters 5, 7, 8 and 10 report long and controversial confrontations with the authorities. These mostly take place at festival times, such as Passover (6:1-71), Tabernacles (7:1-8:59) and Dedication (10:22-42).

Much of John’s gospel is a gift to the dramatist. Many have been the dramatisations of the story of the woman at the well (ch.4), of the man born blind (ch.9) and of the raising of Lazarus (ch.11), scenes which form a traditional Lenten catechesis which prepares for the conferring or recall of Baptism at Easter (Sundays 3-5 in year A, optional in year B and C). Discourse and dialogue are often combined (chs. 4, 6, 9, 11). Chapter 6 seems to be based on a homily centred around texts from the Pentateuch, Wisdom and Prophets (6:31, 35, 45).

It is better to give the title ‘Final Days’, rather than ‘Events in Jerusalem’, to this part of John’s Gospel, because Jesus has already made several visits to Jerusalem in contrast to the single visit recorded in the Synoptic gospels. The solemn tone with which chapter 13 begins indicates that here we begin a major section of the gospel (13:1).

The Last Supper extends over chapters 13-17. A surprise is that we find no mention of the Eucharist, which is an essential part of the Synoptic account of events before the Passion of Jesus (e.g. Mark 14:22-25). John’s story begins with the Washing of the Feet. This is followed by a long discourse, probably modelled on the farewell speeches found in the Old Testament, such as that of Jacob to his sons (Genesis 49:1). John’s passion account is the shortest (18:1-19:42). He repeats much of the tradition that we find in the Synoptics, but he omits the prayer in Gethsemane and the trial before the Jewish authorities. He informs us that Roman soldiers were present at the arrest of Jesus and that after Jesus’s death, blood and water flowed from his side.

In the farewell speech, a new Jacob speaks to his sons (Gen 49), preparing them for the future and commissioning them. The various questions put by his bewildered disciples add dramatic variety (14:5, 8; 16:7). In the passion story itself, we may highlight the dramatic nature of:

This has two conclusions. The first, set in Jerusalem, after relating various appearances of the Risen Christ, explains why the gospel was written. ‘These are written that you may come to believe that Jesus is the Messiah, the son of God and that through believing you may have life in his name’ (20:31). The second is set in Galilee, and has its own conclusion: ‘There are many other things that Jesus did; if every one of them were written down, I suppose that the world itself would not contain them’ (21:25).

Through the various appearances of the Risen Jesus in Jerusalem, we learn how the disciples were brought to faith. Particular models of faith are the anonymous Beloved Disciple, Mary Magdalen and Thomas. It is made clear that the disciples are to continue the mission of Jesus. They are accompanied by the Holy Spirit (20:1-29). By means of his appearances in Galilee, we learn how Peter was to take over Jesus’s role as shepherd; the Paraclete, spoken about at the Last Supper, was not sufficient alone. Meanwhile the Beloved Disciple was to remain until Jesus came again. We surmise that this figure was more than a historical person in the life of Jesus but was a symbol of the role that every faithful disciple would play in the life of the Church (21:1-23).

This is provided by lively and unforgettable narratives: in Jerusalem, the race to the tomb, the dialogue of the Risen Jesus with Mary Magdalen, the meeting with fearful disciples in the upper room, the confession of ‘doubting’ Thomas; and in Galilee, the miraculous catch of fish, the dialogue with Peter, which echoes his three denials during the passion. In all these incidents, we see the ‘good shepherd’ in action bringing abundant life to his sheep (10:10).

It is fitting that we read this gospel during Lent and Easter when we are at our best spiritually. It took time before this gospel was accepted in early Christianity. It was regarded as a dangerous gospel, to be handled with care, because it carried two main risks. It could lead to a neglect of the humanity of Christ, as if the divine Jesus was only pretending to be human. This is known as the heresy of Docetism. It could also lead disciples to claim they could not sin, because they have already undergone judgement in their encounters with the Christ whose glory they have seen. This is known as Gnosticism. These issues are addressed in the Letters of John, which are probably to be dated after the gospel. This writer ‘declared to you what we have seen and heard’ (1 John 1:3) and warned that ‘if we say we have no sin, we deceive ourselves’ (1 John 1:8). A true classic is a text to which we can return again and again, and always discover something new. Rarely indeed will we pick up the fourth gospel and not learn something fresh about the story, the theology and the drama which it contains. It was surely sound instinct and wisdom that led the Church from earliest times to adopt this gospel as its favourite pedagogical means to introduce the profound mysteries celebrated each year during Lent and Easter.

Peter Edmonds SJ is a member of the Jesuit community in Stamford Hill, North London.

The Woman Caught in Adultery

The Battleground of Imagination