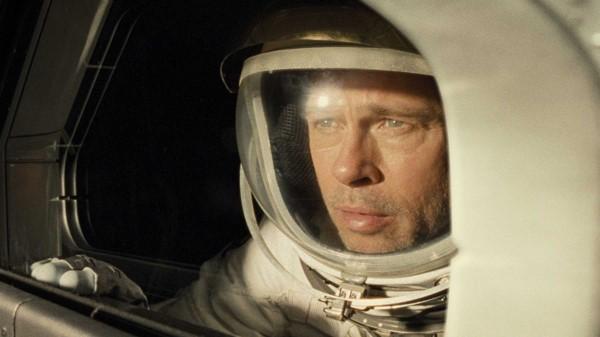 Transcendence, that principal and yet profoundly challenging theological idea, is at the heart of James Gray’s (Lost City of Z) latest film. I say ‘at the heart’ deliberately. So often the word ‘transcendence’ provokes in us a sense of the outermost, priming us to look outwards and indeed upwards ad astra, to the celestial infinity beyond our existence on earth. But what if, as many theologians have suggested, transcendence is not a movement outwards, but a movement inwards? Not just a sense of radical exteriority but of radical interiority also; a sense of the innermost reality of our existence? This is the question with which the film grapples, its drama playing out simultaneously on the vast cosmic stage and in the intimate arena of the human heart.

The story revolves around the relationship between distinguished astronaut Roy McBride (Brad Pitt) and his father, Clifford McBride (Tommy Lee Jones), a legendary astronaut who disappeared decades ago after leading a manned mission to the planet Neptune. Roy, who believes his father to be dead, has nevertheless followed in his footsteps, rising quickly through the ranks of the space agency in part due to his remarkable capacity to stay calm under pressure. At the beginning of the narrative, the earth experiences a series of massive power surges, which cause catastrophic outages to key infrastructures, killing hundreds every time they occur. After one such surge, Roy falls from low-orbit and nearly dies. Afterwards, the agency summons him to a confidential meeting, in which they reveal to him the classified information that they have traced the origin of the power surges to Neptune, and that they believe the mission on which Roy’s father had gone missing has something to do with the surges. So begins Roy’s secret mission to Mars, from where he will try to contact his father, if he still lives, in an attempt to halt the cataclysmic surges. This mission takes Roy to the very edge of humanity’s reach where, among the sparseness of life on the brink of our solar system, what it means to be human seems to get lost, only to be recovered through the intimacy of relationship as father and son reconnect on the edge of existence.

The film’s vast and galactic scope is balanced from the very first lines with a classically intimate device, that of the voiceover, as Roy delivers various monologues to an AI system that conducts psychological evaluations of astronauts. Here the theological significance of the film becomes apparent early on, for the nature of these evaluations renders Roy’s voiceovers perversely as something like confession. Towards the end of the film, one such voiceover follows Exodus 20 and ponders that ‘the sins of the father will be visited on the son.’ Indeed, far from falling into any outmoded notion of Freudian or Lacanian psychoanalysis, these ‘psychological evaluations’ are in fact intended to reckon the spiritual development of the protagonist, affording the viewer precious insights into Roy’s inner being in the midst of a powerfully understated and ambiguous performance from Pitt.

In his direction, Gray manages to ground a science-fiction setting in daily life, spurning the fantasy of most cinematic representations of space travel for an emphasis on the banal and uncannily familiar fixtures of buildings and machinery. Yet still Gray delivers some stunning compositions; the vacuous surface of the moon is stark and rock-bare, veiled in darkness and lit almost exclusively by floodlights, a symbol of human efforts to corral the dark unknown. On Mars, his framing stands out, particularly through the extreme contrast of blinding light on the planet’s surface with the clandestine shadows within the military interiors. The film is set in ‘the near future’ and the mise-en-scène appositely captures this nearness; Gray visits locations across the solar system, but much of the film would not look out of place in the twenty-first century. The terraformed moon resembles (ironically) a visit to the Kennedy Space Centre, while Mars smacks of a present-day military compound.

The central drama of the film, too, is ubiquitous and enduring, rather than peculiar to science-fiction or the futurist setting: the familial. The ties between father and son quite literally bind across space and time in the film, as Gray explores this primordial human relationship between parent and child. Gray realises this connection in spectacular fashion during the film’s climax, with the extraordinary image of father and son tethered together in the vacuum of space. A physical bond is all that stops the two from disintegrating into the expanse as they spin chaotically, the universe sprawling beyond them, infinite and expanding and empty.

This image also captures something of the film’s distinctive treatment of transcendence. In a number of scenes Clifford describes his mission, which led him to Neptune in the first place, as ‘God’s work.’ His motivations are religious, his entire purposefulness drawn from his faith and his inspiration from the majesty of creation that he perceives in the vastness of the cosmos. Yet his search is fruitless, and by the end of the film he is found alone and isolated, confronted not with the divine infinite but with the bleak reality of empty space. It is only through Roy’s arrival, and the complex love between them, that a more promising awareness of an interior transcendence emerges. It is with this that the film concludes, abandoning Clifford’s pursuit of transcendence among the stars in order to return inwards to our worldly existence and the transcendent reality of the love that binds us to each other.

This is an existential film, which goes to the cosmic limits of humanity to explore what it means to be human. On this perennial question the film is outwardly bleak and inwardly hopeful. As we grow more disparate and move apart from one another we lose something of our own being, but the film treasures a kernel of hope that the bonds of love can offer a return to the innermost reality of human being.

Advent Week 1
Advent: Good News for the Poor?
Liturgy and longing
Dorothy Day and the body of Christ
The Jesuit way toward holiness