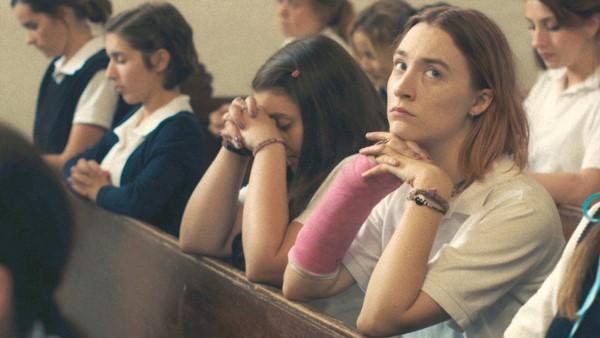 ‘In a place of grace, of recognition of God’s remarkable eternal love channelled through unremarkable ordinary people, we can make the choice to be that loving presence, that sustaining arm for someone else.’ Jake Martin SJ continues to give us advice on what to watch in lockdown as he suggests that a 2018 Oscar nominee gives us a glimpse of the grace of the First Week of the Spiritual Exercises.

‘Don’t you think maybe they are the same thing? Love and attention’?

These words are said by a nun to the eponymous heroine (Saoirse Ronan) of Greta Gerwig’s Lady Bird (2017) and serve as one in a series of revelations on a journey that culminates in a deeper understanding of how to love and be loved. These few words get to the heart of the message of Gerwig’s directorial debut: true love is a lot more than what is found in the boilerplate cinematic offering of ‘boy meets girl’.

Lady Bird sits with Frances Ha (2012, co-written by Gerwig and directed by her partner, Noah Baumbach) and Little Women (2019, Gerwig’s second film as director) in a subgenre of sorts within the umbrella genre of the love story: the romantic comedy without the romantic, or at least, what we traditionally understand ‘romance’ in movies to be. In counterpoint to, for example, Love Actually, a film which attempted to portray loving relationships of varying kinds and degrees, Gerwig’s films do not anchor themselves in the traditional trope of the heteronormative love story. If anything, in her films, that is usually an afterthought, if it is present at all. In Lady Bird, for example, the lead’s two forays into that kind of romance prove to be unfulfilling to say the least: first, in the most jarring of situations, she discovers that Danny (Lucas Hedges), the star of the school musical, is gay; and Kyle (Timothée Chalamet), he of the aloof bad boy type, winds up doing what bad boys in movies always do, he loves her and leaves her. These romantic subplots are inconsequential in and of themselves, but do serve the larger purpose of deepening the audience’s understanding of those relationships that are the most significant in the film: Lady Bird’s relationship with her mother, Marion (Laurie Metcalf) and her best friend, Julie (Beanie Feldstein).

Although it takes place primarily within the context of an American Catholic high school, Lady Bird is not an overtly religious film, nor however, is it reductive in its treatment of its religious elements. The two explicitly religious figures in the film, the principal of Lady Bird’s high school, Sister Sarah Joan (Lois Smith), and the priest directing the school musical, Father Leviatch (Stephen McKinley Henderson), are depicted neither as monsters nor paragons of virtue, but instead as ordinary, oh-so-fallible people. Sister Sarah Joan is shown to be sympathetic to Lady Bird’s restless spirit and desire to be and do something more than she thinks her life as a high school student in California will allow. Father Leviatch is poignantly portrayed as suffering from clinical depression while also lacking the support network to help him with his struggle, an all-too-grim reality for many real-life clergy and religious. Father Leviatch’s depression does not distinguish him from the rest of the community – indeed, Christine’s father (Tracy Letts) is also shown to be suffering from depression – but rather unites him with the film’s collection of broken, yet lovable characters.

It is Lady Bird’s continual emphasis on the fusion of its characters’ brokenness with their lovability that makes it so much more than just your typical ‘coming of age’ story. Lady Bird captures the essence of the grace found in the First Week of the Spiritual Exercises of St Ignatius: we watch our protagonist coming to terms with who she truly is, and in doing so, garnering the capacity both to love and be loved in a deep, transcendent way. The First Week focuses on sin, both in the universal sense – that is, as it pertains to original sin and its ubiquity on a global scale – and at the personal level, wherein we ask God to accompany us as we reflect upon our own sinful histories. It is in that period of reflecting on our past that God sheds light on God’s continuous loving action in our lives, through the myriad people, events and circumstances that enter and exit our stories.

Two of the most significant graces of the First Week of the Exercises are coming to an understanding of one’s true self and, from that place, recognising oneself as a beloved child of God. When we ask God to guide us through our own history of sinfulness, in doing so, God cannot help but show us the depth of God’s love for us. God’s transcendent, eternal, inexhaustible love frequently manifests through the limited, finite and broken people in our lives. It is those individuals, be they parents, siblings, teachers, friends, co-workers, however long or short the duration of their presence in our lives, whose love lifts us up and sustains us. This love has repercussions, which might not be immediately evident – indeed, we might not become fully aware of them until much later. Perhaps it is only after having walked through difficulty, suffering and hardship, carrying the crosses we all must inevitably endure, that we can recognise that it was this love, emanating from a collection of finite and broken people, that sustained us and kept reminding us, even in the darkness, that yes, we are lovable, yes, we matter, and yes, we are worth it. It is in this place of grace, of recognition of God’s remarkable eternal love channelled through unremarkable ordinary people that we can then make the choice to be that loving presence, that loving voice, that sustaining arm for someone else. This message is what makes Lady Bird so much more than your standard love story, indeed it is a Love Story.

Jake Martin SJ studied film at Trinity College Dublin and is a regular contributor to America.