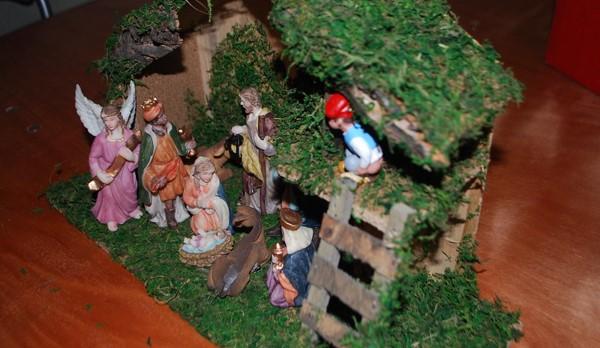 Although the feast of the Holy Innocents may seem like an interruption to our Christmas festivities, it can bring us to a fuller appreciation of the gift of the incarnation, suggests Mark Dowd. What would happen if we welcome ‘the grit in the oyster of the Christmas story’ and allow ourselves to be challenged by the painful and contemporary reality of suffering?

More than ten years ago, I took a sabbatical away from the UK to go and live for a year in Madrid, a place where Christmas traditions are very different to those in Blighty. The Spaniards erect huge cribs in the streets with life-size models of the Holy Family and shepherds. It is called a ‘Belén’, after the Spanish name for Bethlehem. On the corner of the Gran Via, stretching my neck to overcome the hordes of onlookers, I was admiring one such creation when my attention was drawn to a rather odd figure in the corner of the scene. It was a young peasant boy, squatting just out of reach of the oxen, with his trousers down by his ankles. I said to a friend: That figure is not doing what I think he is doing, is he?’ I was greeted with a smile. ‘Yes, he’s called the caganer [polite translation: ‘defecator’]. He’s there as a check on the danger of getting too sentimental about the nativity scene,’ my friend said. ‘I guess it reminds us that when heaven meets earth and the Word becomes flesh, it means taking on everything that is human.’

Well that certainly put a new gloss on the traditional Christmas story. Several days later, the same friend invited me round to his family home on the feast of Los Reyes Magos to celebrate the Epiphany, the visitation of the three wise men, and eat the delicious crown-shaped roscón cake. As the knife came out to cut into it, there was an air of excitement. Which person, on slicing the cake, would end up with the metal miniature baby-shaped figure embedded in the tasty jam sponge? ‘Metal?’ I asked. ‘What happens if someone bites on it? What happens if someone swallows it?’ I was told that the figurine was symbolic of the flight into Egypt and that many Spaniards and Latin Americans had traditionally used a small bean to represent the infant Jesus. But not this family. Of course, with total predictability, I ended up with said decorative object in question. It compromised one already fragile pre-molar and, fittingly, I ended up with my first dental crown courtesy of Dr Ian Daniel, a British dentist at the nearby Cisne Dental clinic which I had hastily located via the internet.

I share these stories for a purpose. Over that particular Christmas period they were my grit in the oyster; a reminder that this festive season of incarnation isn’t just all about the pearls: the sugary scenes of nuclear families, lowing cattle and Gloria in Excelsis Deo. And the Church, in its wisdom, knows that too. It brings us down to earth with a decisive bump in these post-nativity days. Barely before we are digesting the last remnants of dinner and the brandy flames are dying on the Christmas pudding, we are into the martyrdom of St Stephen. Before too long and well before the turn of the year, we’re also asked to ponder the slaughter of the Holy Innocents and the bloody murder of St Thomas Becket. We can identify with the heroic stances made by the individual martyrs, but how to relate to and make sense of a feast which commemorates a whole cohort of unnamed children? What sense can we make of it in the twenty first century?

Thank goodness mores and values have changed since the middle ages. The Encyclopaedia Britannica entry for the Feast of the Holy Innocents informs us that, ‘in medieval England children were reminded of the mournfulness of the day by being whipped in bed in the morning; this custom survived into the 17th century.’ Yet the historical basis for Herod’s actions remains mired in unresolved debate. Only Matthew of the evangelists narrates the tale. Nicolaus of Damascus, a personal friend of Herod the Great, makes no mention of it in his works and neither does Josephus in his Antiquities of the Jews. Moreover there are wildly fluctuating estimates of the reported loss of life. Whilst Byzantine liturgy traditionally commemorated 14,000 young ones lost in the massacre, others have asserted that as few as ten or twenty male babies under the age of two may have been living at the time in the immediate area in question.

Lest we are tempted just to leave this feast for hazy conjecture, I suggest it does fulfil a contemporary purpose and that is to give us a chilling reminder of how innocent life is always the victim when men’s political and warring excesses get the upper hand in the insecure male adult psyche. When I worked at the BBC’s Panorama in the 1990s, I was sent out to the American Midwest in the immediate aftermath of the Oklahoma bombing in April 1995. Our role was to find witnesses to the life of Timothy McVeigh, the disgruntled former US soldier who had been arrested and who would eventually be sentenced to death for his hand in the loss of 168 lives. One morning I picked up my copy of USA Today and was paralysed for several minutes by a photograph on the front page. It was of a firefighter carrying the bloodied corpse of one-year-old Baylee Almon. For those of older generations, the images will be of Vietnamese children at My Lai after the Americans dropped napalm, especially the iconic photo of Phan Thi Kim Phúc. Photographer, Nick Ut, was awarded a Pulitzer Prize for the black and white photo of the naked nine-year-old girl who was captured with several other children running down the street to escape the worst effects of the attack. And a further uncomfortable thought: dare we add to these images the hundreds and hundreds of clerical sex abuse victims in our own Church and beyond, innocents who were cruelly and calculatingly robbed of their innocence?

This is the world that the vulnerable Christ-child was born into. A world in which innocents frequently pay the price for the warped agendas of the vain, the ambitious, the crazed. A world in which three teenage migrants can figure among the 27 bodies in the English Channel when the flimsiest of vessels collapses on the raging waters, and in which the whole nation grieved for six-year-old Arthur Labinjo-Hughes. The tale of Herod the Great and his reign of terror should not be banished in our hearts and minds to some distant bygone age, locked away in some safe time pocket where it cannot harm or challenge us. We try to soften its blows with the chilling beauty of the Coventry Carol’s minor chords – ’this poor youngling for whom we do sing’ – but this painful reality of the suffering and death of little ones is more like some Jungian universal archetype that comes back to haunt us. Again and again.

And at its root lies injustice. Which is why the grit in the oyster of the Christmas story is a constant reminder to us: to combat the consequences of the worst of human excesses and, where we can, open up our minds, our wallets, our homes … for in welcoming the suffering innocents and trying to assuage their pain, we also let in the one who came to make God fully known to us.