Skip to main content
Photo by Barta IV at flickr.com 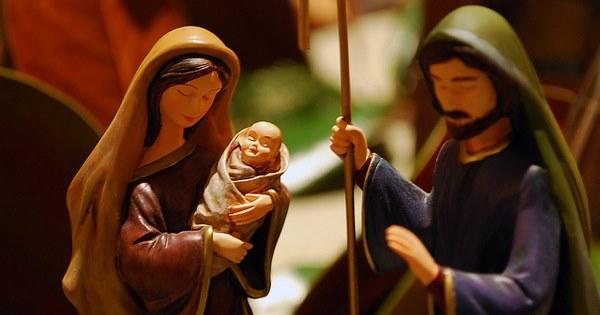 Our series exploring Jesus’s family tree concludes with a study of those closest to him: Mary and Joseph. Anthony Towey wonders how the ‘greatest story ever told’ has acquired such a peaceful gloss, when in fact it is riddled with disturbance and uncertainty.  For the Feast of the Holy Family, we turn our gaze to two new parents and try to capture the faith, hope and love that sustained them in their turmoil.

From a very young age, Mary, Joseph and Jesus were held up to me as ‘The Holy Family’ – a haloed trio artistically represented with sublime, serene aspect. They seemed very different to our family and the noisy, feisty reality of my own upbringing as the only brother to five elder sisters. To be sure I was dimly aware that there would be sorrows ahead. Like someone who had seen a spoiler for a TV series, I knew that Jesus would suffer. Yet even then, resurrection was the antidote to Calvary; and the Holy Family were still copper-bottomed solid and deep-pool calm. My mum occasionally grumbled that ‘Mary only had one – she should have tried keeping track of six’, but I was more taken with the fact that according to the carol, little Lord Jesus was so holy that he didn’t even cry in a manger. Shut down Mothercare – no dummy necessary!

But these are the thoughts of children. For the older person contemplating the Christmas mystery there is more than enough in the storyline to shred the nerves and fuse even the most unresponsive synapse. Indeed ‘Christmas peace’ is a classic biblical oxymoron!

For a start there is Mary’s pregnancy. A young girl, maybe fourteen/fifteen – perhaps a better time than later to engage wholeheartedly in something so wild. Would an older woman have thought through the consequences more readily: humiliation? Stoning? Death? It is both fantastic and crazy, both wonderful and subversive, that the fate of the world would hang on the love response, the ‘yes’ of a teenage girl, but that is exactly what the scriptures say. Belonging to perhaps the gender and age group that are most cynically exploited today, Mary shines in this natality: her coming of age is our age of becoming. The lowly place, the maid-servant, out-glories the Temple and becomes the acceptable ark of grace for the New Covenant.

Lovely. But Joseph doesn’t believe it. I once remarked to a female friend that Joseph was a really good chap for not handing Mary over to the authorities to be dealt with. ‘Typical bloke!’ was the reply. ‘Sooner believe an angel in a dream than his own fiancée in real life!’ We are told that Joseph was a bit older (this being perhaps an explanation for why he isn’t around at the time of the Passion). Age does not normally help us with romance, but it delights me that a sign of the spirit is that even old folk can still dream (Acts 2:17). Joseph, like his namesake in Genesis, is a gifted dreamer. Hope in the future enables us to change in the present, and both Joseph and Mary exemplify faith in believing what should not be possible. Addicted as we are to control, predictability and (so-called) rationality, this radical dependency is the lived divinity of the poor that is so anxiously avoided by the rich.

And so the story unfolds. The first witness to Jesus is, as Mother Teresa so famously pointed out, an unborn child. Mary and Jesus; Elizabeth, John and Zechariah – a family scene doubtless full of anxious, expectant chatter against the dumb background of the erstwhile doubter (Luke 1:20 & 39-56)! The nervousness of their pregnancies must have been a daily worry, yet it is a biblical curiosity that the explosions of praise from their hearts have become prayers more familiar to us than anything that any other disciples have said. The rosary is cherished throughout Catholicism and indeed Mary’s song – the Magnificat – has received the ultimate compliment in that it has been banned for being subversive by various totalitarian regimes down the years, including by the British in India. I suppose pregnant mothers are subversive. They thoroughly undermine the jaded cynicism of our weary failures, laying down their lives as a pledge for our future.

But this is almost the last straightforward scene. There is displacement – bureaucracy interferes with the family, as it does the world over. They fill in the forms and go to Bethlehem, ‘the house of bread’. No room at the Inn, they lay him in a manger... a feeding trough. These are not accidental symbols for a community that, in Luke’s time, is increasingly estranged from the synagogue and is deriving its strength, its nourishment, from their Eucharistic Lord (cf. Luke 24:13-35). Joseph and Mary in this sense represent domus ecclesiae, the humble domestic church, long before its steepled transformation. The shepherds, so often the last to know, are the first to hear from the angels, who are always the first to sing: ‘Joy to the world!’

But not for everyone. It is a truism to say that Luke’s is Mary’s nativity of joy while Matthew reports Joseph’s story of sorrow. The star that attracts the Magi, the wise from the ends of the earth, also attracts the unwise Herod from much nearer home. There is more wisdom for us to learn from a child than from a king – how often did Jesus in his own preaching try to get this across? Power is a form of lust, and Herod’s massacre of the innocents is the inevitable outcome. It is something that every generation does, ours no less than theirs. How must Mary and Joseph have felt? In turmoil from their own displacement and fleeing for safety, but aware, as parents of a newborn, of the particular sorrow entailed by the loss of infant life. ‘A voice was heard in Ramah ... Rachel weeping for her children’ (Matthew 2:18).

So what became of these broken-hearted asylum seekers? Let’s be thankful that they didn’t fall foul of UK immigration. An age-gap couple with a dependent – Egypt was clearly more welcoming than we might be and the rest, as they say, is history. It goes without saying that though they didn’t exactly live happily ever after, Mary and Joseph have stayed in the religious and artistic imagination ever since. But if I have a Christmas wish for the Holy Family, it is that the artists and poets among us will continue to explore their story. I would love a statue of Joseph where his lily is replaced by a hammer and his shoulder has a smattering of vomit. I would love to see more iconography of a pregnant Mary, not least to encourage the scared young mums of our day. Lastly, I would love to hear more poems of the Holy Family that go beneath the glitz, through the turmoil and fathom the depth; poems that in turn could become prayers that capture their hope, that capture their faith, that capture their love.

For further reflection, try Pray as you go’s Advent retreat, ‘All the Generations’. Listen >>