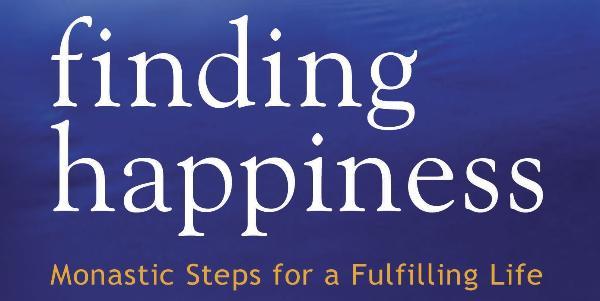 Through his inspired decision to allow Worth Abbey to host the television series The Monastery, Christopher Jamison has become probably the best-known Benedictine in Britain. That series followed five men with little formal religious background as they briefly entered into the rhythm of monastic living. All were touched by the experience. It is Jamison’s conviction that the Rule of St Benedict and other writings of the great monastic founders have much to offer contemporary lay-people as they search for fulfilment in life. His first book, Finding Sanctuary, drew on what he and his community had learnt in the process of making the TV series. This second work, Finding Happiness, follows a similar format.

The Preface states the writer’s starting-point succinctly: “The simple idea running through the whole book is that happiness comes to us indirectly as the fruit of defeating the causes of our unhappiness.” The core of his work is then an analysis of the Eight Thoughts, which arise spontaneously but tend, if acted upon, to lead us away from all that makes for true human happiness. These thoughts were first categorised by Cassian, a fourth-century monk who was a bridge between the wisdom of the original monastic Desert Fathers (and Mothers), and Benedict and his successors. Pope Gregory the Great, two hundred years later, re-formulated the eight thoughts as the more familiar seven deadly sins, but two important elements were lost in this transformation. First, the Thoughts are not in themselves sinful. They draw us away from happiness, and thus should be resisted; but there is nothing culpable about them. Second, Gregory omitted one, acedia, from Cassian’s list. And in Jamison’s eyes, acedia is a key concept if we want to understand the spiritual state of much of the Western world today.

For acedia is the inclination to neglect spiritual realities, letting the cares, concerns and distractions of the everyday world fill my every waking moment. It can only be overcome by the kind of reflective self-awareness that our culture often regards as a waste of time. But without such reflection I will easily fall prey to the other Thoughts (listed here as gluttony, lust, greed, anger, sadness, vanity and pride). By contrast sustained awareness of what is going on within me greatly helps me to resist the pressure of the Thoughts, and allows me to practice instead the corresponding virtues which alone lead to happiness.

This framework offers Jamison a way of commenting on many of the ills of contemporary society. Along the way he discovers many more similarities than might have been expected between the struggles faced by his own brothers trying to grow as good monks, and those of hard-working family members attempting to live with integrity. The mental discipline underlying chastity, for instance, is not so different in those practising the vows of celibacy and married couples. Likewise monks can be as tempted to acquire the latest electronic gadget as any teenager!

As one with a background in the spirituality of Ignatius Loyola, reading a book so deeply rooted in that of Benedict I was inevitably inclined, as the old examination question puts it, to “compare and contrast”. Jamison is suspicious of allowing yourself to be guided by your feelings in reaching important decisions. One chapter contrasts the experiences of feeling, knowing, and doing good, and of these feeling is very much the poor relation. Now he certainly recognises, with Ignatius, the need to sift through feelings, and that some are more to be trusted than others. And Ignatius wouldn’t dispute the idea that reflective living is a vital component of the moral quest. But overall perhaps Jamison has a greater confidence that understanding one’s thought processes will be largely enough to enable one to do the good thing.

Another contrast came from his belief that you best achieve happiness by defeating the causes of unhappiness. This leads him to devote the book almost entirely to a consideration of the negative thoughts that impede happiness. There is a tantalising glimpse in the final chapter of the Eight Virtues that contrast with the Thoughts (moderation to replace gluttony; chaste love instead of lust; generosity overcoming greed; gentleness not anger; gladness rather than sadness; spiritual awareness banishing acedia; magnanimity supplanting vanity; and pride yielding to humility). Ignatius advised always following the path of consolation, and I would have been delighted to read a fuller account of these positive virtues as the stepping-stones to happiness that Jamison believes them to be. Perhaps his next book will take up that challenge?

But a review should not dwell overlong on the book that wasn’t written. Overall the writer has produced a highly accessible guide to ways in which the monastic wisdom of the early Middle Ages is still relevant to anyone who wants to understand what happiness really is, and how it can be reached. It is the role of a Benedictine abbot to make the words of the Rule a living reality within his community. Here Christopher Jamison has fulfilled that role for a much wider community than that of the monks of Worth Abbey.

The reviewer, Paul Nicholson SJ, is Director of Novices at the Inter-Provincial Jesuit Novitiate in Harborne, Birmingham. He is also Editor of the spirituality review, The Way.

Read an exclusive extract from this book on Thinking Faith

Celtic Spirituality: Just what does it mean?

The Great and Holy War: How World War I changed religion forever

Grey Wisdom: not quite the last word on religious pluralism
In the beginning…
The breath of God: Coronavirus and theodicy
‘Take, Lord, and receive’: Nostalgia, truthful memory and the Great War
Laudato si’: a Seismic Event in Dialogue between the Catholic Church and Ecology