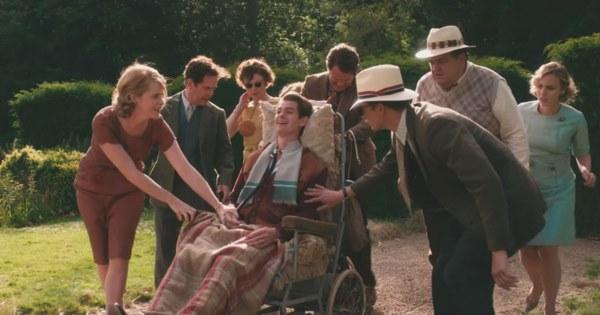 The BFI chose to open the 2016 London Film Festival with A United Kingdom, a pleasant but undramatic rendering of the true story of a couple whose love triumphed against the odds. The opening gala of the 2017 festival was Breathe, which could be described in exactly the same way.

The couple in question are Robin (Andrew Garfield) and Diana Cavendish (Claire Foy), and the odds become stacked against them when Robin contracts polio in 1958, while they are living in Kenya and Diana is in the late stages of pregnancy with their first and only child, Jonathan (who was a producer on the film). Paralysed from the neck down and unable to breathe for himself, the prognosis is that Robin will spend what remains of his life attached to a ventilator and in a hospital bed. Neither Robin nor Diana can make their peace with this, and so Diana goes to great lengths to make arrangements to bring Robin home and take on his nursing care. The two of them, with the help of an ever-present team of family and friends, then pioneer several techniques and inventions to improve the quality of Robin’s life and, by proxy, the lives of other polio-sufferers and severely disabled people.

Their achievements are remarkable, but that does not mean that they can be projected onto the big screen in an engaging way. The film unfortunately demonstrates the difficulty of injecting momentum into a narrative that is essentially driven by incremental improvements in technology. There is, of course, the occasional setback, and the characters pay lip service now and again to the frustration, trauma and heartache of the circumstances in which they find themselves, but then the ‘Keep Calm and Carry On’ mentality is back in the blink of an eye. Everyone is a bit too stoic, and so the viewer struggles to get purchase on the vigour and despair that must have been in constant tension with one another. The film chooses to take the steady middle road between the extreme emotions that were no doubt in play.

Neither of the leads seems particularly stretched by the task at hand. Foy dials down the regal-ness and intensity of her Queen Elizabeth II in The Crown to play the devoted wife with a stiff upper lip; Garfield has the more difficult job of letting his face and voice do all the work, and therefore does well to bring a significant presence to the screen. Both of them should be praised for playing ‘good’ without being preachy, which is a hard note to strike. Credit is due to the supporting cast, too, which includes Hugh Bonneville and Tom Hollander… twice. He plays both of Diana’s identical twin brothers, thanks to some seamless editing.

The film was directed by Andy Serkis, whose phenomenal work in a motion capture suit brought Gollum to life and who has since brought those talents to King Kong and the recent re-imaginings of The Planet of the Apes. It’s a curious script for a man of his skillset to have chosen for his directorial debut, given that movement was always going to play a limited part in the proceedings. Serkis is a long-time friend and colleague of Jonathan Cavendish, which explains his connection to the project, but there is no evidence here that his many competences include the telling of human interest stories.

The most traumatic scene by far is Robin, Diana et al.’s visit to a facility for severely disabled people in Germany, which I can only liken to a morgue for the living, and has to be seen to be believed. It’s the only context in which the film looks at disability from a societal rather than a personal point of view. ‘Why do you keep your disabled people in prisons?’, Robin asks an assembled group of medics and scientists after his visit to this institution. After a rousing speech he is met with a standing ovation from all of his (able-bodied) hearers – well-deserved, of course, but with a slight air of, ‘Job done! Dignified treatment and unlimited funding for disabled people forever’, which does not ring true, especially in the current climate of social care in the UK. It’s an example of how the film circles the airspace around big questions without ever coming in to land – end-of-life questions rear their head more than once, but the ethical weight of them is never held in the balance, save the odd interesting, throwaway remark that is forgotten as soon as it’s said: ‘We can’t keep Robin alive to keep his friends happy’. Likewise, the disdain that the general public has for the severely disabled, in terms of attitude and infrastructure, is caricatured rather than addressed. ‘They shouldn’t let them out like that,’ says a stranger on a bench on seeing Robin in his wheelchair. ‘Believe me, it’s far more distressing for me than it is for you,’ he replies, and it’s played for laughs. And although it might be anachronistic to talk about support for carers, the way in which Diana is portrayed as a facilitator of Robin’s life is uncomfortable. So little attention is paid to her struggle and pain that one would be forgiven for asking whether or not she felt any. It would not chip away at the pedestal on which the film puts her to address this and make her obvious selflessness seem a bit more human.

There is always a value to telling stories about the people whose actions and ideas have shaped the world we live in, particularly when the roots of their accomplishments are in quiet and so-often-uncelebrated love and commitment. But it is hard to escape the fact that such stories are not always riveting viewing, certainly not when the grit that makes their lives a bit more relatable is smoothed down. Perhaps your time would be better spent watching Summer in the Forest, which tells the story of L’Arche in all its joy and sorrow.