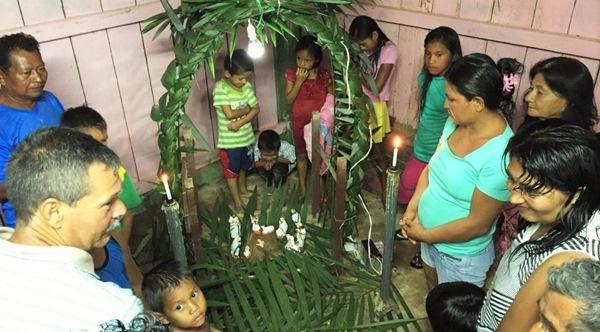 In a small Peruvian village, Christmas 2015 will be remembered for a long time to come – it was the first time in many years that a priest had visited the community to say Mass. Philip Harrison SJ, who accompanied Fr Valerio to Chimbota, describes the celebrations and reflects on the lasting impression left on him by the joy and awe of the villagers, whose Advent had been longer than most.

We started to ring the bell an hour before Mass was due to start so that the people who lived by the river would have time to arrive. No one could quite remember the last time a priest had come to visit this tiny village nestled on the banks of the river Amazon. One man, Leonardo, explained that the community’s faith had been kept alive through the visits of religious sisters. Some of the villagers had been trained as animators in order to lead the weekly meetings at which they share readings from the bible, pray and sing together.

The chapel was built from planks of wood with a corrugated iron roof; the exterior painted custard yellow, the interior pink. The windows opened onto the village football pitch from where the women’s football team could be heard playing their Christmas match. A three metre high cross stood defiantly outside as though asking for the faith not to be forgotten, in a place all but forgotten by the Church. In the background the crickets sang in the forest, their song at once seductive and absorbing.

Inside the chapel, two water-stained pictures were carefully propped against the back wall. The first was of the Divine Child, the patron of the chapel, arms outstretched and smiling brightly. The second was a reproduction of a painting of the crucifixion, El Señor de los Milagros, which had miraculously survived the Lima earthquake of 1655. A white candle had been lit and placed before each of the faded images. As I looked on, I felt something stir in the chapel, the echo of the deep faith of this devoted community.

We had arrived that afternoon after a three-hour trip in a launch, three Jesuits from Brazil, Argentina and Britain, to be greeted by the mayor, enthusiastic to welcome outsiders to their small community. He himself came to the chapel to hook up the electricity and install two fluorescent tubes in the roof beams so that we could celebrate the Christmas Eve Mass. They had organized a chocolatada for the children of the village, a Peruvian tradition of serving hot chocolate made of cocoa, maize flour, evaporated milk and vanilla. We doled out the hot chocolate with slabs of panettone slathered with margarine. Instead of reaching out or shouting for attention, the children stood patiently waiting, with a natural dignity that was stronger than their hunger.

As seven o’clock approached, the rain came down suddenly and heavily, thundering on the hot metal roof of the chapel. Only two people had turned up, so we decided to wait. I wondered if our journey had been in vain and if the faith of this community had been left neglected too long to survive. Evangelical Christians, Seventh Day Adventists, Baptists and a Peruvian sect called the Israelitas have all made their demand on the community, attracting believers. As in many parts of the Amazon, the Church does not always know how to be present when confronted with the cultural and logistical challenges of this region.

As the rain eased off, though, the people trickled in and as Mass began the chapel was full – of children, mothers, fathers and the elderly. Father Valerio’s homily started with an invitation to two members of the congregation, a man and a pregnant woman, to walk from the doorway towards the empty crib. He explained that Mary and Joseph had to cross a frontier to return to their home town of Nazareth. In a region in which the borders of Brazil, Peru and Colombia snake along the river, the experience of crossing frontiers was all too familiar. As was the experience of being a stranger. In the season of Christmas, the Holy Family are the strangers we welcome into our home, Christ the stranger we welcome into our poor heart. I realised that the narrative of the birth of Christ was just as strange for this congregation as our arrival in their village had been that afternoon, and that their welcome of Christ would be just as joyful.

Whereas I had grown up with the Christmas story and its message engraved on my heart, for some of the children, the empty crib made of palm fronds in the corner was the first they had seen. Father Valerio brought out the figures wrapped in newspaper. As they gently unwrapped each one and placed it in the crib, the children wondered at the tiny figures, asking who they were and what they were doing. Something that was so familiar to me became a little miracle, for there had not been a crib here in many years. The quietest of the animators gleefully lit the two candles which stood before the crib, and Father Valerio connected the battery to illuminate the figures arranged below.

He asked the congregation whether they would neglect a newly born baby. They answered ‘no’, and that neither would they neglect Christ born among them in this tiny village on the banks of the river Amazon. The months and years waiting for a priest to visit the village had been an Advent for them in which their faith was sustained in prayerful waiting, through thick and thin. The leadership of trained animators had kept them faithful. And now as the night drew on, Christmas had finally arrived in Chimbota.

Philip Harrison SJ is a Jesuit in formation for the British Province. He is studying Theology at the Pontificia Universidad Javeriana in Bogotá, Colombia.

Forming a Church with his Indigenous People: The work of Bishop Samuel Ruiz Garcia

And so this is Christmas…