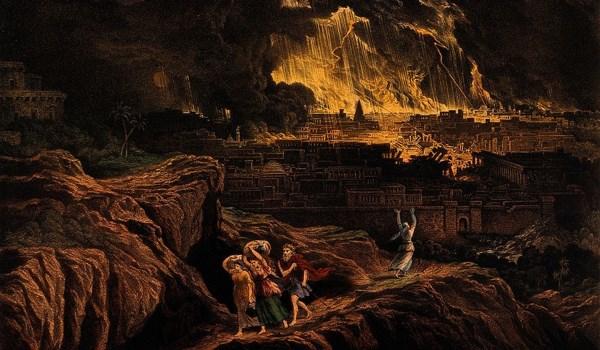 What does Jesus’s reference in Luke’s Gospel to the story of Lot’s wife tell us about the importance of our attentiveness, individually and collectively, to the work of the Spirit in our histories? Gero McLoughlin SJ finds an appeal to the importance of memory in a 16th century sermon.

In Lent 1594, one of the greatest of all Anglican preachers, Lancelot Andrewes, preached a sermon before Queen Elizabeth I at Hampton Court Palace.[i] He took as his text Luke 17:32, one of the shortest texts in the New Testament, consisting in English of three words and five syllables: ‘Remember Lot’s wife’ - Memores estote uxoris Lot.

…the storehouse, and the very life of memory, is the history of time; and a special charge have we, all along the Scriptures, to call upon men to look to that. For all our wisdom consisting either in experience or memory – experience of our own, or memory of others, our days are so short, that our experience can be but slender;… and our own time cannot afford us observations enough for so many cases as we need direction in.

The story of Lot’s wife is cited by Jesus, and so by Andrewes, as a cautionary tale. Jesus wants those who have forgotten the story to remember it, and those who do remember it never to forget, so that they do not lose what they have gained and die in a relapse like that of Lot’s wife.

Whether or not you are familiar with the story of Lot in chapters 18 and 19 of the Book of Genesis, you may nonetheless be asking in what Andrewes saw this relapse of Lot’s wife to consist.

The Angel had given charge to Lot and his company… 'Scape for your life, stay not in the plain, look not once behind thee lest thou perish.' 'Scape with your life' – She trifled for all that as if no peril were. 'Stay not on the plain,' yet stayed she behind. 'Look not back lest thou die.' She would and did look back, to die for it.

Her sin is to refuse the prompting of God. This, says Andrewes, developed by degrees. The first was that she did not 'strictly keep her to the Angel's charge,' but treated is as something to heed or ignore as she saw fit. Then, she grew tired and could not keep up when she tried to follow Lot and the Angels. This fatigue paved the way for her to give up: ‘he that hath not list to follow, will pick some quarrel or other to be cast behind.’ Finally, she looked back to the place she longed to return to, showing that her heart had stayed behind in the place from which her feet had come. Although looking back may have different causes, in her case it had been caused by growing weary of trouble and of moving so often.

The particular tragedy of Lot’s wife succumbing to this sin, for Andrewes, was that:

this woman had continued now thirty years,… from Abraham's going out of Ur to the destruction of Sodom. This, this is the grief, that she should persist all this time, and after all this time fall away. The rather, if we consider yet further, that not only she continued many years, but sustained many things in her continuance, as being companion of Abraham and Lot in their exile, their travel, and all their affliction. This is the grief, that after all these storms in the broad sea well passed, she should in this pitiful manner be wrecked in the haven … she woefully perished, when God's special favour was proffered to preserve her; … that so many ways before remembered by God in trouble, she so coldly remembered Him.

From her particular case, Andrewes draws a general admonishment:

When men weary of a good cause which long they have holden, for a little ease or wealth… [they lose] the praise and fruit of their former perseverance, and relaps[e] into the danger and destruction from which they had so near escaped.

However, we need not all grow weary and follow Lot’s wife into danger and destruction, says Andrewes. We can draw something useful from her example:

1.            Remember perseverance. Drawing on St Augustine, he said that no matter which other virtues we do or do not possess, perseverance is the only crowned virtue: Perseverantia sola coronatur.

3.            To free ourselves from our securities we must cultivate a holy fear of the possibility of giving up or relapsing; and the only way of being secure in this holy fear is to fear security.

God calls us to have faith in the uncontrollable freedom of the Word, which accomplishes what it wills in ways that often surpass our calculations and wreak havoc upon our plans. Ideology is to faith as night is to day. God calls us to be creative about our future.

Creativity, though, requires imagination, and imagination is rooted in memory. Is that our individual memories? Is it our collective memory, subconsciously carried, cognitively and emotionally, and rarely expressed? Of course, it is both of those things, but it is more. The memory of the Church and of all the followers of Christ in their various communities and works is the Holy Spirit.

Jesus said: ‘Anyone who loves me will keep my word, and my Father will love them, and we shall come to them and make a home in them. Anyone who does not love me does not keep my words. And the word that you hear is not my own: it is the word of the Father who sent me. I have said these things to you while still with you; but the Paraclete, the Holy Spirit, whom the Father will send in my name, will teach you everything and remind you of all I have said to you.’

In the Meditation on the Kingdom of Christ in the Spiritual Exercises, the one making the exercises desires not to be ‘deaf to His call but prompt and diligent to accomplish His most holy will’. To succeed in this we must, through shared prayer and reflection, pray for the grace to know the life of the Holy Spirit in the events of our history, to ‘read’ them as the life of the Holy Spirit and joyfully to embrace that life in the choices we make.

Remember, Lot’s wife! Like Lancelot Andrewes, we can draw on scripture as one of the tools to guide our understanding of God’s relationship with us. The consciousness of that relationship is the treasure that will give us the humility to hear the call, energy to set out, freedom not to look back and confidence in the journey, and so help us to persevere in being the people we are in God’s sight and not Lot’s wife.

Andrewes’ warning about the fate of Lot’s wife is an awful one. I prefer to end with a milder encouragement from the Jesuit Teilhard de Chardin:

Above all, trust in the slow work of God. We are quite naturally impatient in everything to reach the end without delay. We should like to skip the intermediate stages. We are impatient of being on the way to something unknown, something new. And yet, it is the law of all progress that it is made by passing through some stages of instability – and that it may take a very long time.

And so I think it is with you. Your ideas mature gradually – let them grow, let them shape themselves, without undue haste. Don’t try to force them on, as though you could be today what time (that is to say, grace and circumstances acting on your own good will) will make of you tomorrow.

Only God could say what this new spirit gradually forming within you will be. Give Our Lord the benefit of (your) believing his hand is leading you. And accept the anxiety of feeling yourself in suspense and incomplete.[ii]

Gero McLoughlin SJ is the Promoter of Ignatian Spirituality for the Jesuits in Britain.

Lancelot Andrewes(1555-1626) died as bishop of Winchester. Andrewes was someone of enormous erudition and linguistic skill. His name was first on the list of divines appointed to compile the Authorized Version of the Bible that was commissioned by King James VI and I and was completed in 1611. Andrewes headed the ‘First Westminster Company’, which took charge of the early books of the Old Testament (Genesis to 2 Kings). He acted, furthermore, as a sort of general editor for the project as a whole. Such was Andrewes’ linguistic ability that in the oration preached at his funeral, John Buckeridge, Bishop of Ely said that Andrewes could have acted ‘as interpreter general at the confusion of tongues’ (Genesis 11:9).

The Sense of an Ending