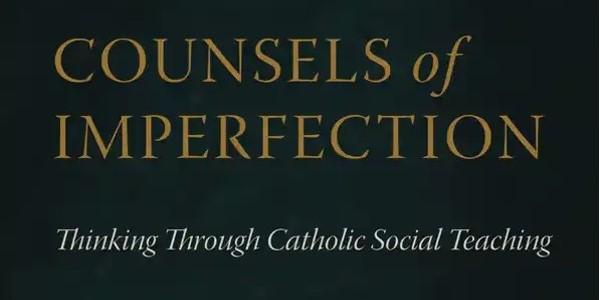 Teachers marking work are sometimes encouraged to use the ‘two stars and a wish’ format, affirming two things they liked about the work, and noting one thing they wish had been included, or done differently. With apologies for borrowing the format, I would like to award Edward Hadas’s thought-provoking and very worthwhile Counsels of Imperfection: Thinking Through Catholic Social Teaching a handful of stars, note two missing bits, and raise two questions.

Hadas’s book sets out to introduce and propose the tradition of Catholic Social Teaching (CST). Many similar volumes introduce the ‘Church’s best kept secret’ to an audience that is basically presumed to be Catholic and fairly sympathetic: after a brief introduction to the genre, they give overviews of key topics in CST or summarise its key texts. These are the first stars: Hadas’s book sets out to explain CST not just to the sympathetic, but to the sceptical. Where some introductions focus on description, Hadas’s book has a strong thematic and analytical approach, introducing the reader to the ‘big ideas’ of CST. Magisterial documents can be stodgy, but Hadas does an excellent job of presenting the key themes, strengths and weaknesses deftly and engagingly. Those who are new to the tradition, as well as those already well versed in it, will find his summaries rewarding. Sometimes, reading books on CST feels a bit like eating carrot sticks: you know it’s good for you, but it’s hard work; Counsels of Imperfection is well-written enough to be enjoyed, rather than dutifully chewed through.

Stars should also be awarded for Hadas’s attentiveness to the historical contexts in which various bits of CST emerged and developed, and for his attention to the complex relationship between CST and modernity, including how this changes over the course of the tradition. The book cites widely, and Hadas draws not just on the big encyclicals, but on many smaller magisterial documents as well. He links each CST topic to scripture, and covers some topics that are both unusual and welcome, like the Church’s attitude to Jews and antisemitism.

More stars: one of the things I most appreciate about Hadas’s book is that his analysis does not fall out along the usual party lines of ‘left’ and ‘right’, or ‘liberal’ and ‘conservative’ –political terms that are not always accurate or helpful when applied to the Church, but do indicate broad camps of opinions about CST. Thus Hadas argues that CST on migration is absolutely correct (not an opinion cherished by the Catholic right), but also suggests that the Church’s environmental teaching ought to be more cautious on the issue of human-caused global warming (not an opinion cherished by the Catholic left). He is prepared to give credit to secular governments for some modern developments (ending hunger, for example) that earlier Christian societies failed to tackle, but is deeply critical of other areas of modern life and progress, particularly with regard to family and sexual morality. The effect is that this book will make you think, and it does a very good job of presenting familiar topics from fresh angles.

What’s missing? The book does not have much consideration of non-Western contexts. In fairness, the CST tradition itself has until recently largely focused on Western issues and addressed itself to Western problems. However, it is a tradition that is addressed globally to all Catholics (as well as now to all people of good will, or all people on the planet). Hadas’s analysis of the relevance of CST is also squarely focused on a Western context: he is addressing its ‘cultured despisers’, and the bogeymen here are Hegel, Locke and the Romantics.[1] This narrows its reach somewhat. UN statistics suggest that 20-40% of women in locations where Lockean ideas about the family are unlikely to reach – Afghanistan, Amazonian Guyana, Iran – routinely report ‘unmet need for contraception’, e.g. that they would have liked to space or limit births but were unable to do so. Catholics in some countries are dealing not with the threat of an omnipresent Hegelian state, but with weak or absent states; they are less likely to be concerned about the state showing children condoms at school, and more concerned about its inability to guarantee their most basic human rights. No book can do everything, but Hadas’s book would have been strengthened by greater engagement with such non-Western experiences and concerns.

The second missing part is that the later chapters, on marriage and family, do not have the same attention to dialogue with non-Catholic sources and historical contextualisation as the earlier chapters. The chapters on economics and government cite a range of sources, including those that touch on the history of ideas, on wider (sometimes non-Catholic) studies, and experts in the field. In the chapters on marriage and the family, the footnotes are more magisterial and less rich, and the attention to history of ideas is less evident. The critical dialogue proceeds with large and constructed opponents: the Hegelian state, the Lockean view of the family, the Romantic view of love. I should be frank: I disagree very strongly with Hadas, and with the Church, about many of the issues covered in this chapter (the role of women, contraception, LGBT+ relationships), but I would nevertheless like to see a stronger argument for the Church’s teaching that engaged with some of its more formidable and living critics.

Lastly, it is testament to the thought-provoking nature of Hadas’s book that it left me with two questions. The book is not straightforwardly anti-modern or anti-world (which is, as he notes, a silly stance), nor is it pro-world or pro-modern (a dangerous stance). Nevertheless, it does discuss Catholic identity as though it is something in principle separable – or which at least ought to be separable – from its wider political and social context. This idea of Christians as pilgrims is very Augustinian, and it also reflects (unintentionally I think) currents in recent Protestant ecclesiology from virtue ethicists like Stanley Hauerwas, who want the Church to be socially distinctive and Christians to be ‘resident aliens’.[2] My question reflects Kathryn Tanner’s response to these Protestant ecclesiologists: the Church may be socially distinctive in various ways at different times, but Christianity is not a whole identity or, as she puts it ‘a whole cloth cultural alternative’.[3] It’s always mixed in with other things, both in practice and in theory – our capitalism, our nationality, our culture, our ethnicity, our politics. Christian identity does not and has never wholly displaced these; it acts more like a verb than a noun, negotiating its way by borrowing, re-using, critiquing, levering and sometimes rejecting other sociocultural commitments.

The tendency to discuss Catholic identity as something separable means that Hadas often uses categories of Catholic–not Catholic, Church–world, orthodoxy–heresy/error/ wrongheadedness that sound starker and more binary than the more textured and nuanced historical and critical analysis that underpins them. This is occasionally disorienting, as accounts of the historical emergence of CST concepts that note their porous boundaries with secular and modern thinking give way to more starkly Catholic-or-not language. So, after a long run up, my first question: is there such thing as a separable Catholic identity, not in theory, but in empirical fact?[4] And if, as Tanner suggests, there isn’t – that it’s more a style than a whole-cloth cultural alternative, a way of borrowing, adapting, critiquing and changing other overlapping identities and ideas – do we need less language about identity, and more language about discernment?

This leads to a second question. I recall an undergraduate lecture on the early Church when a Methodist friend, bemused by the political and theological chicanery of the period, leaned over to me and whispered: ‘So…what she’s saying is that heresy is just unpopular orthodoxy?’ The difficulty with a strong error/orthodoxy binary is that it tends to starve of oxygen just the kinds of discernment processes that Hadas’s careful historical work uncovers. In other words, the history of CST is littered with errors that were errors until they were orthodoxy. Hadas’s scheme allows for this: the judgements of CST are prudential ‘counsels of imperfection’, the best that can be said by applying the principles of CST and Catholic doctrine to the complex problems of each age; they can and do change. He is prepared to countenance and even advocate change in some areas (integral ecology) but much less so in others (marriage and the family). So, the second question, both for this book and for the development of CST more broadly – what place dissent? I hope that I will live to see the Church change its teaching and its treatment of women and LGBT+ persons. Perhaps that makes me a ‘secular goat’ rather than a ‘Catholic sheep’, or perhaps it makes me a cultured despiser.[5] Perhaps in the future I will turn out to have been a critical friend after all.

Theodora Hawksley is the secretary of the Equipping Christian Leadership in the Age of Science project, based at St John’s College at Durham University.

[4] ‘Empirical fact’ is shorthand here for: if one did, or drew upon, a serious qualitative sociological study of the ways that people construct and negotiate their religious or secular identities.