Skip to main content
Photo by TREEAID at flickr.com 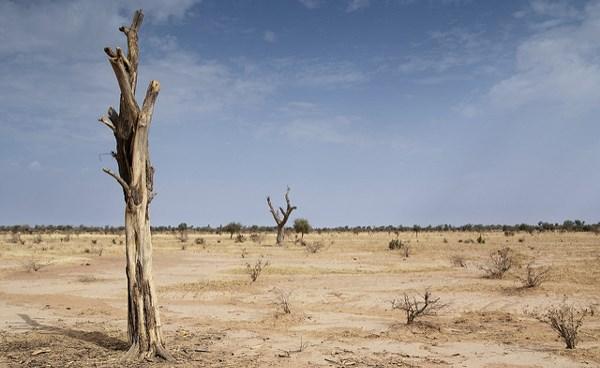 Early Christians spent time in the desert because it was there that they felt best placed to turn themselves to God. Nearly 2000 years later, the deserts of the world can still orient us to God, but perhaps for a different reason. Jaime Tatay SJ uses Ignatian ideas to show that the desertification of the natural world should challenge us ‘to shape more enlightened and responsible ways of thinking, feeling and behaving’.

When we think of a desert today, we imagine a waterless, desolate area of land with little or no vegetation, typically covered with sand or rocks. The Sahara, the Gobi or the Atacama deserts would be examples of such barren places. In a world that is becoming ever more crowded, we define deserts by an absence.

But the term ‘desert’ had a slightly different meaning for the first generations of Christians: they didn’t see deserts as being empty or lacking, they saw them as the purest examples of God’s creation. The so-called Desert Fathers searched for uninhabited spaces, where they could find God in places uncontaminated by anything other than his creation. These could be either bone-dry places or heavily forested areas where little or no human presence, and therefore solitude, was the norm. Anthony the Great was one of the first ascetics who moved into the wilderness – the Eastern Desert of Egypt – and the Christian monastic tradition began as others followed in his footsteps.

During Lent, Christians are invited to go – metaphorically and literally – into the desert, as the Desert Fathers did. This is not a quirky invitation, one for the adventurous or outdoorsy few; it is an invitation to all, an invitation to imitate Jesus’s own spiritual quest for silence, to simplify our lives and cultivate a contemplative attitude that will prepare us to grasp fully the mystery of Easter.

As Pope Francis has pointed out,

Christian spirituality proposes a growth marked by moderation and the capacity to be happy with little. It is a return to that simplicity which allows us to stop and appreciate the small things, to be grateful for the opportunities which life affords us, to be spiritually detached from what we possess, and not to succumb to sadness for what we lack.[i]

But why must we go into the wilderness to put this into practice instead of staying in our churches and homes? One reason stands out. When we read the gospels, we realise that Jesus didn’t go to the local synagogue or even to the Temple in Jerusalem when he wanted to pray. He preferred to go to the wilderness. Like Moses, the prophets and John the Baptist before him, Jesus talked to his Father, the Creator, in a place where he could be most in touch with creation.

Across the gospels, we find many examples of divine encounter in the midst of nature. At the very beginning of Jesus’s apostolic life, ‘the Spirit led Jesus into the desert’. Later on, Matthew tells us that, after Jesus had ‘dismissed the crowds, he went up the mountain by himself to pray’. Luke also reminds us several times that Jesus ‘would withdraw to deserted places and pray’.

Sometimes he would rather go to a garden. Or a lakeshore. Or the Judean desert. The place changed, but the pattern is obvious. Jesus went to Jerusalem to argue with the priests or celebrate Passover, but when he needed to be with God, he fled to places devoid of synagogues and unmediated by the authorities that governed them. We could paraphrase Henry David Thoreau’s oft-quoted phrase – ‘in the wilderness is the preservation of the world’ – by saying that, for Jesus, in the wilderness dwells the living God.

The Lord was able to invite others to be attentive to the beauty that there is in the world because he himself was in constant touch with nature, lending it an attention full of fondness and wonder. As he made his way throughout the land, he often stopped to contemplate the beauty sown by his Father, and invited his disciples to perceive a divine message in things.[ii]

So, during Lent, we are specially invited to imitate Jesus and go into the spiritual and natural wildernesses of our time for transformation and encounter with God. However, to accept this invitation we have to overcome several obstacles in our contemporary, noisy, hyper-connected, rapidly urbanising world.

The first, obvious challenge, is the very place where most of us live today: cities. In a world where more than half of humanity lives in urban areas, one needs to make an effort to find repose, silence and time within those environments to stop and contemplate. And even more effort is required if one wants to get out of the city and move into the diminishing wilderness surrounding the urban jungle.

Which brings us to the second major challenge to finding God in creation: the increasing degradation of that creation that is a living sacrament of the presence of the Creator. At this point it is illustrative to distinguish between the (natural) deserts that the first monks looked for and the (human-caused) desertification going on in many parts of the world today.

Desertification is the process by which fertile land becomes desert, as a result of drought, warming weather, deforestation, or inappropriate agriculture. Pope Francis has warned us of this grave problem in the context of the Amazon in particular.[iii]

The challenge that desertification poses to us is not only economic and cultural, but spiritual as well: ‘God has joined us so closely to the world around us that we can feel the desertification of the soil almost as a physical ailment, and the extinction of a species as a painful disfigurement’.[iv]

The physicality of this environmental destruction, the way in which we feel it, means that the desert can still, as it did for the Desert Fathers, mediate our relationship with God too, although in a different way. Today’s deserts can be the agent for the conversion we strive for particularly in Lent – our full conversion, which must include an ecological dimension. To facilitate that, we can draw on a Christian spiritual tradition not so different from the one the Desert Fathers cultivated.

Those familiar with the Spiritual Exercises of Saint Ignatius of Loyola know that the ‘Contemplation to Attain Love’ is not only the concluding meditation of the month-long retreat originally designed by the Basque mystic. It is, above all, a sending forth into the world urging the retreatant to live with eyes wide open and find God in creation, ‘in all things’.

This is a meditation that surely inspired the Jesuit poet Gerard Manley Hopkins. In God’s Grandeur, one of Hopkins’ best-known poems, we are invited to contemplate the plants, the animals, the waters and the skies – in a word, creation – to discover that, ‘There lives the dearest freshness deep down things’.

However, we live in a world where water and air are being polluted, the atmosphere and the oceans are warming up, and animal and plant species are disappearing at an alarming rate. Isn’t it becoming more difficult to find God out there in the wilderness, when the wilderness is of our making? Finding God in the natural desert is one thing, but how are we to find him in the deserts that are formed from the destructive tendencies of humankind? As Benedict XVI said: ‘The external deserts in the world are growing, because the internal deserts have become so vast’.[v]

In short, desertification is as much a cultural and spiritual challenge as it is a technological and economic one. We need, more than ever, to go beyond the scientific information and technological assessments and contemplate the destruction of nature with eyes wide open – we need to undertake a spiritual exercise as well as a scientific on in order to determine the causes and effects of this destruction.

Here, Ignatian spirituality proves helpful again. In the first week of the Spiritual Exercises, the retreatant is invited to meditate on sin – social and personal. Ignatius insists on the importance of the retreatant being affected and moved by what he or she meditates on. Could we adapt this type of prayer to contemplate the desertification and degradation of the natural world? Could the expanding cultural and biological deserts of our time be the locus of – or, even better, the stimulus for – transformation, or ecological conversion? We can’t just ‘know’ what’s going on out there, in the atmosphere, in the oceans and in the forests; we also need to ‘feel’ and then reflect on our personal contribution to all these transformations and disfigurements. This ecological orientation is integral to any cultural transformation that truly seeks to shape more enlightened and responsible ways of thinking, feeling and behaving.[vi]

Again, Pope Francis, quoting Patriarch Bartholomew, seems to be pointing in this direction when he speaks ‘of the need for each of us to repent of the ways we have harmed the planet, for “inasmuch as we all generate small ecological damage”, we are called to acknowledge “our contribution, smaller or greater, to the disfigurement and destruction of creation”.’[vii]

Back in 2001, John Paul II called for a global ecological conversion. Now, Francis details the personal and social character of this call affirming that,

the ecological crisis is also a summons to profound interior conversion … [an] ecological conversion, whereby the effects of their encounter with Jesus Christ become evident in their relationship with the world around them. Living our vocation to be protectors of God’s handiwork is essential to a life of virtue; it is not an optional or a secondary aspect of our Christian experience.[viii]

The Desert Fathers were ‘convinced that [the desert] was the best place for encountering the presence of God’.[ix] In Lent, we are called to seek the wilderness, convinced it is the best place for repenting, contemplating and meditating upon the external and internal deserts of our time. May this repentance, contemplation and meditation lead us to ecological conversion.

Jaime Tatay is a forest engineer and a Jesuit priest. He is the author of many articles on ecology, spirituality and Catholic Social Teaching. He is also part of the @Ecojesuit team (www.ecojesuit.com)

The Virtue of Asceticism

The virtue of eating less meat