Skip to main content
Photo by Robin Hutton at flickr.com 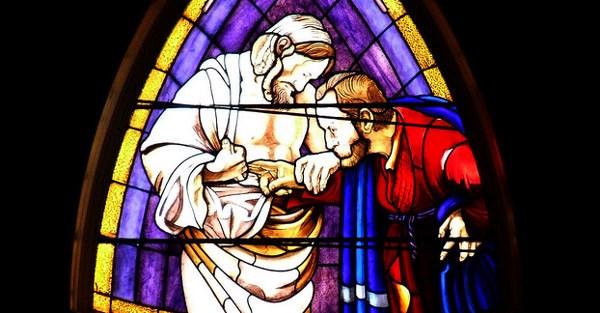 The immigration detention centre residents for whom Harry Elias SJ leads bible study draw much faith and encouragement from biblical texts, which are often their sole reading material. Fr Elias shares his reflections on their discussions about what it really means to have faith in the risen Christ: it is not about an encounter with a resurrected body, but about an understanding of God’s faithfulness to his people.

Faith in the resurrection is commonly thought of as believing that life continues after death in some kind of body. St Paul talks of a heavenly body as opposed to an earthly body (1 Corinthians 15:40), but that does not leave me much the wiser about what form that body takes, nor would St Paul intend it to.  All I know is what I am told about the appearances and movements of the risen Jesus in the gospels.

One such appearance is to the disciples (John 20:26-31), among them Thomas, who is most often singled out as ‘doubting’.  I am not convinced that this is a fair descriptor. We know that he was called ‘the Twin’ (John 20:24); and a twin, especially if he were an identical twin, would have been accustomed from very early on in life to being mistaken for his lookalike sibling. So perhaps Thomas was making sure, in case the other disciples were deceived by a lookalike who would later embarrass them, that indeed it was Jesus, with the mark of his nails to show that he had really died and risen.

Whatever were Thomas’s motives, when Jesus asked him to feel the wounds of the nails in his body, Thomas answered, ‘My Lord and my God!’; and Jesus said to him, ‘Have you believed because you have seen me? Blessed are those who have not seen and yet have come to believe.’ John continues by saying that the signs he records were done in the presence of the disciples and are written that the reader ‘may come to believe that Jesus is the Messiah, the Son of God, and that through believing you may have life in his name’. Faith needs to be mediated through the senses, it can be aroused and encouraged by what is seen, touched and heard; but it cannot be reduced to sensory experience. Thomas (and the reader of the gospel) is chided for doubting the testimony given to him by eyewitnesses, but his faith in Jesus, as his Lord and God, went beyond what he saw and heard and touched (or not).

Central to Thomas’s and our faith in the resurrection is not so much that there is life after death in a risen body, but that Jesus is vindicated as Lord and God. ‘God raised him on the third day,’ said Peter in the house of Cornelius, ‘and allowed him to appear, not to all the people but to us who were chosen by God as witnesses, and who ate and drank with him after he rose from the dead. He commanded us to preach to the people and to testify that he is the one ordained by God as judge of the living and the dead.’ (Acts 10:40-42)

The Lordship of Jesus in his resurrection is the prime testimony to the faithfulness of the God of Israel to his covenant people, who were the first to be given the gospel. It was, ‘the God of Abraham, the God of Isaac, and the God of Jacob, the God of our ancestors [who] has glorified his servant Jesus’ (Acts 3:13).  God is faithful to Israel, to whom belongs, ‘the adoption, the glory, the covenants, the giving of the law, the worship, and the promises’ (Romans 9:4); and especially to his promise to Abraham that, ‘in your descendants all the families of the earth shall be blessed’ (Galatians 3:8, Genesis 12:3).

The faithfulness of God in making a new covenant, in establishing his Kingdom ‘on earth as it is in heaven’, is in fact the gospel, the good news:

But this is the covenant that I will make with the house of Israel after those days, says the Lord: I will put my law within them, and I will write it on their hearts; and I will be their God, and they shall be my people ; ….for I shall forgive their iniquity and remember their sin no more’. (Jeremiah 31:33-4)

Prophecies of the new covenant had envisaged the Kingdom of God coming on earth as a new creation: in Ezekiel 36:26, ‘A new heart I will give you, and a new spirit I will put within you’; and Isaiah 65:17, ‘For I am about to create new heavens and a new earth’. The Kingdom begins to be established through the life and teaching of Jesus, supported by his miracles. His resurrection is the first fruits of the new creation, followed at his coming – the parousia – by those who belong to Christ (1 Corinthians 15:23). And, in fact, all creation ‘waits with eager longing’ to be ‘set free from its bondage to decay to obtain the freedom of the glory of the children of God.’(Romans 8:19,21) God’s rule is now mediated by the risen Lamb that was slain (Revelation 5:13), sitting at the right hand of God (Mark 14:62 and Daniel 7:13-4).

At the Last Supper, Jesus spoke of the offering of his suffering and death for the forgiveness of sins as establishing the new covenant (see also 1 Corinthians 11:25: ‘This cup is the new covenant in my blood’). He refers elsewhere to prophecies of his Lordship: ‘The Lord said to my Lord, “sit at my right hand until I put your enemies under your feet.”’ (Mark 12:36). In Luke’s Gospel, when the risen Jesus meets the two disciples on the way to Emmaus, he tells them, ‘“Was it not necessary that the Messiah should suffer these things and then enter into his glory?” Then beginning with Moses and all the prophets he interpreted to them the things about himself in all the scriptures.’ (Luke 24:26-7). Isaiah 52:13 – 53:12, one of the Suffering Servant hymns, was also believed to prophesy the atoning suffering of the Messiah: ‘But he was wounded for our transgressions, crushed for our iniquities; upon him was the punishment that made us whole, and by his bruises we are healed’ (53:5).

The faithfulness of God in fulfilling these prophecies is seen both as judgment on evil and as merciful love, bringing forgiveness. For Jesus, salvation and God’s mercy were the focus; his warnings of judgment were to enable people to repent and receive God’s mercy in the grace of forgiveness. Jesus suffered obediently the judgment of death for sin, which is common to all, but in his rising from the dead, God’s mercy comes in the Holy Spirit, with forgiveness for all who repent and believe in him and are baptised (see Acts 2:38).

Paul says the Spirit given to us is the Spirit of adoption who enables us to cry ‘Abba!  Father’; ‘we are joint heirs with Christ – if, in fact, we suffer with him so that we may be glorified with him’ (Romans 8:16,17).  And, ‘If the Spirit of him who raised Jesus from the dead dwells in you, he who raised Christ from the dead will give life to your mortal bodies also through his Spirit that dwells in you’ (Romans 11:5). The newness of life in the Spirit is experienced in faith, which is the assurance of things hoped for (Hebrews 11:1). The Spirit comforts us and enables us to endure even to the point of death.  The Spirit arouses in us a personal love of the God who enters our life as Saviour, and unites us in love with the brethren of Christ, especially the ones in need, enabling even the forgiveness of our enemy. The expected conduct to be aimed at by a Christian is found concentrated in the Sermon the Mount (Matthew 5-7) and in Paul – especially in Romans 12, where he describes this newness of life in practical terms; and, of course, in his famous analysis of the sacrificial love that imitates the love of Christ (1 Corinthians 13).

Faith in God’s faithfulness to each one of us, so that ‘all things work together for good for those who love God’ (Romans 8:28), can make us read the events of our own life also in terms of personal faithfulness, God’s and ours. Yet, it is He who takes the initiative and He who finishes the work in us and of His new creation – He is the Alpha and Omega (Revelation 1:8). Paul says that the word of faith he proclaims is on the Christian’s lips and in his heart, ‘because if you confess with your lips that Jesus is Lord and believe in your heart that God raised him from the dead, you will be saved’. (Romans 10:9). We have to keep asking ourselves whether we truly believe in, and so experience, the power of God’s mercy coming to us through Jesus Christ, our Lord and Saviour risen from the dead.  Can we, for whom Jesus is not made visible, not doubt, but be blessed in believing?

Easter Reading: The Acts of the Apostles