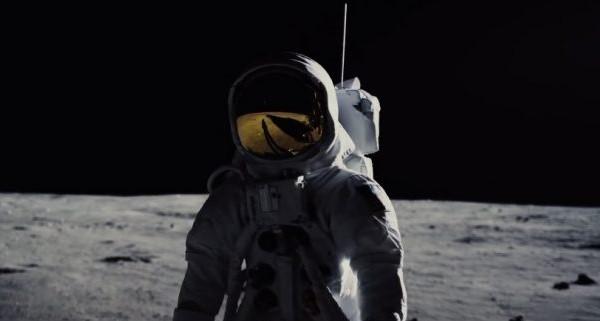 Fifty years after the Moon landing, does humanity understand itself and its place in the cosmos differently? Mark Aloysius SJ thinks that Damien Chazelle’s film First Man helps us to reflect on that question, as it tells the story of ‘the furthest a human being has ever journeyed in order to be at home with their own self.’

After fifty years, we are perhaps finally in a position to examine if those words uttered by the first man on the surface of the Moon have become a reality. After six crewed landings on the Moon and countless other explorations of space, stretching our understanding of the known universe and our imagination of what lies beyond, has humankind taken a giant leap? As is often the case, progress is not something easily measured and there are many ways of understanding what it means: increase of scientific knowledge or technological expertise, economic development, and so on. But I ask this question anew not as a scientist or economist – I am neither – but as a member of the human race who calls earth home. In questioning whether progress has been made, I am more interested in asking a more fundamental question: has space exploration deepened our understanding of our own selves as human beings within the cosmos?

As was the case fifty years ago, but perhaps more so today, there is a problem with the translatability of scientific knowledge into a language comprehensible to any thinking person. It is in this sense that the Moon landing was of fundamental significance, for it demonstrated the translation of scientific knowledge into technological sophistication that enabled humanity to gain control over an environment that is otherwise hostile to human life. Although there had been great advancements in scientific knowledge at the turn of the twentieth century with Einstein’s Theory of Special/General Relativity (1905/15), and ultimately a rupture with the classical physical worldview that Quantum Theory (mid-1920’s) brought about, the Moon landing, in a restricted sense, did not depend on these newer theories; it was very much the crowning demonstration of the power of classical Newtonian physics.

Nearly a century after the discovery of these theories, the rupture of the classical paradigm of physical sciences, the gulf between what we know of the macroscopic and microscopic world, has not been resolved. Heisenberg’s discovery of the uncertainty principle (1927) epitomised this rupture. He showed conclusively that in spite of technological advancement in instrumentation, the more precise the scientist is in determining the position of a sub-atomic particle, the less s/he knows of its velocity, and vice versa. This means that the scientist’s selection of the kind of observation of reality that is made in itself determines reality. At least in the microscopic world, then, there is no given objective world to be ‘discovered’, as such, by the scientist. In Heisenberg’s words, ‘the object of research is no longer nature itself, but man’s investigation of nature. Here, again, man confronts himself alone’.[1]

Remarking on the uncertainty principle and the conquest of space in a little-known essay, the political theorist Hannah Arendt states that it is here that the concerns of the scientist overlap with the concerns of the layperson. This intertwining of concerns is symbolically and dramatically enacted in the exploration of space:

The astronaut, shot into outer space and imprisoned in his instrument-ridden capsule where each actual physical encounter with his surrounding would spell immediate death, might well be taken as the symbolic incarnation of Heisenberg’s man – the man who will be the less likely ever to meet anything but himself and man-made things the more ardently he wishes to eliminate all anthropocentric considerations from his encounter with the non-human world around him.[2]

Damien Chazelle’s 2018 film, First Man articulates this concern through a profound meditation on the theme of the exploration of space, both exterior and interior, in the events leading up to the Moon landing. From beginning to end, the viewer is led into spaces that induce claustrophobia: a cockpit that rattles violently through the use of dizzying camerawork; a dark room where Ryan Gosling’s Neil Armstrong considers the effects of radiotherapy on his daughter, Karen, who then dies from cancer; the cramped space of the Apollo 11 module shared with other astronauts who do not always see eye-to-eye. Then there is the counterpoint in the scenes of the lunar terrain, the vastness of space that envelops it and its deep silence, which Chazelle invites the viewer to listen to and savour. Throughout the film, it is intimated to the viewer that Armstrong seeks to escape earth because of the unbearable loss of his daughter, whom he visualises again and again in the film. Immediately after he utters those famous first words on the Moon, the camera shies swiftly away. We are not allowed to linger in the triumphalism these words may conjure or in any imagined conquest of the Moon or space. Instead, we are invited to gaze again into the vast emptiness of space, and we see Armstrong thinking once more of Karen. Indeed, wherever he may go, he confronts his sense of loss, bewilderment and, thus, his own self.

No forgetting is permitted, but there on the lunar terrain Chazelle offers his protagonist release through a simple, muted gesture of letting go, which I do not want to describe further, for it is to be relished as it is depicted in the film. It is the interior space of freedom that Chazelle wants the viewer to reach through attentive engagement with the film; but that interior space finds symbolic, external expression at the vantage point that the first man on the Moon christened the Sea of Tranquillity, from which the earth looks so beautiful in the vastness of space. This space, this vantage point, is so fragile, so easily lost. Yet, though his experience of it is fleeting, we see the deep change that it brings about in Armstrong when he greets his wife, Janet in the fluorescent-lit isolation room on his return: there is a renewed tenderness, expressed elegantly in knowing silence.

Through his film, Chazelle unmasks the politics of the conquest of space. What is revealed is that the craving for such conquest is countered by the desire to belong to each other, to the world, to one’s own self. But freedom cannot be achieved through technical sophistication over the cosmological space, nor can it be acquired through techniques of self-mastery to bring about tranquillity within the psychological space. These techniques of mastery over both spaces are shown for what they are: futile, if not accompanied by the confrontation of the self with itself. Even the word confrontation is inadequate, for in Chazelle’s meditative film, there is something so simple, so gentle, through which he depicts this silent dialogue of the self with itself. Here in this film is a pedagogy of encounter, and it is gentle and kind, even to those parts of the self that struggle with loss or confusion, and those parts that yearn for solace and to be at peace with all that one loves in the world. In other words, here is a story of the furthest a human being has ever journeyed in order to be at home with their own self.

How, then, might a religious person respond to the insight of the scientist and the yearning of the artist, represented by Heisenberg and Chazelle, respectively, fifty years after the Moon landing? To add something to the contemporary understanding of the human person, the religious person must think of developing modes of religious engagement that facilitate a genuine encounter with the self in the world. An encounter of the kind described above cannot be offered by calling for liturgical perfection or moral rigidity, which at times seem to be the dominant modes of religious response to a society bewildered by upheavals in contemporary thought. These are inadequate responses to the desires of a person in the contemporary age, for they lead to an estrangement from the self and the world. They are nothing but an escape into some kind of aestheticisation of the religious response, or an uncompromising quest for purity at the expense of considering the person as they are embedded in society and the cosmos.

An incarnational Christianity, which contemplates the mystery of God becoming human in Jesus, cannot be content with any escapism but must begin by understanding this desire for encounter, which is felt by all people, in all its depth. The mode of religious response must be a pedagogy of encounter that cultivates, through prayer and formation, a thinking faith and a discerning heart, which flow into service of each other and the world.  In this pedagogy of encounter, there are no techniques of mastery to be learnt, but rather the reverse. There is the unlearning of techniques and delusions of mastery, in order to recognise a different way in which God – who is present in, and also above and beyond, the depths of the self and the cosmos – wants to relate to me and to the world. This is a mode of encounter permeated with wonder in the sacramental value of the entire universe and with love of all of creation, flowing out of that fundamental encounter with God who looks upon me, as I am in the world, with wonder and love.

Perhaps no one else has expressed this sense of wonder and awe in the miracle of existence as eloquently as Immanuel Kant did in his conclusion to the Critique of Practical Reason. ‘Two things fill the mind with ever-increasing wonder and awe, the more often and the more intensely the mind of thought is drawn to them: the starry heavens above me and the moral law within me’. Kant goes on to say that these realities, which inspire wonder and awe, are not to be imagined to be so far away; indeed, they are near: ‘I see them before me and connect them directly with the consciousness of my existence’. It is the task of the religious person to facilitate this encounter.

Fifty years after the Moon landing, if the religious person is to contribute meaningfully to an understanding of the human person, they will need to respond to those desires to explore and to extend what we know of the universe and the desire to be at home with oneself in the world. The religious person must find a way of authentically witnessing to the truth that because they are created by God in time for eternity, they are in the world, but not of it.

For my father, who through a telescope looking at the Moon, taught us optics and astrophysics. And my mother, who told my friends and I that she couldn’t care less if we went to the Moon, as long as we attended to our present duties first. To both of them, who valued learning and service, I dedicate this essay.

Mark Aloysius SJ is a Jesuit of the Malaysia-Singapore Region. He resides at Campion Hall, Oxford, where he is currently working on a doctorate on the question of desire in Hannah Arendt and Augustine. He is also a member of the editorial board of Thinking Faith.

[2] Hannah Arendt and Jerome Kohn, ‘The Conquest of Space and the Stature of Man’ in Between Past and Future : Eight Exercises in Political Thought, Penguin classics (New York: Penguin Books, 2006), p.272.