Skip to main content
Photo by Angela Sevin at flickr.com 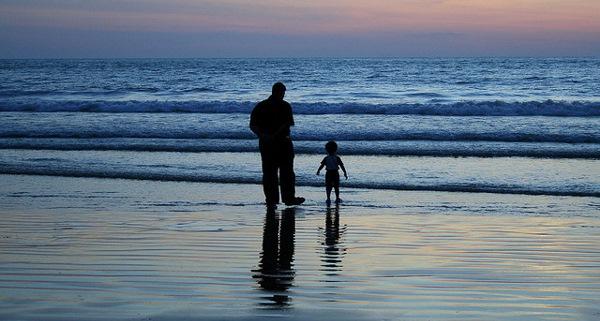 When Christians ascribe to Jesus the four familiar titles from Isaiah 9:6 – ‘Wonderful Counsellor, Mighty God, Everlasting Father, Prince of Peace’ – the one that might seem out of place is ‘Everlasting Father’: isn’t Jesus, the Second Person of the Trinity, the Son? But consider the understanding of divinely-instituted kingship that informs this text, says Teresa White FCJ, and a new and helpful perspective on fatherhood can emerge.

Read 'A child by any other name': the introduction to our Advent series. Read >>

Some years ago, I made a retreat in Ryde on the Isle of Wight. Walking by the sea one evening, I saw three striking sand models lying side by side on the beach: a huge shark, its mouth full of razor-sharp teeth; an elegant woman with seaweed hair; and a man sitting on a throne, complete with crown, orb and sceptre. I stood there quietly for some time, marvelling at the confident artistry of these intricate figures – they reminded me of the stone carvings of a Gothic cathedral. Aware that the sea was rapidly moving nearer as the tide came in, I pondered their forthcoming natural but inevitable obliteration.

All of a sudden, a tiny girl appeared at my side. ‘My daddy made them,’ she said, bursting with pride. ‘But soon the tide will wash them away.’ She ran as near as she could to the models – a clear case of reflected glory – then she disappeared as fast as she had come, her pink bath-robe billowing out behind her in the wind. Minutes later, two teenage boys carrying cricket bats ran up to the models. They battered them in seconds. Once again, a pink whirlwind sped past me, ignoring me this time. Miniscule and furious, she stood in front of the boys, tears streaming down her face. ‘Don’t do that! You mustn’t do that!’ she wailed. ‘My daddy made them.’ It was too late. The models were already destroyed… The child’s father must have been watching, for he came quickly forward, swept his little daughter into his arms and hugged her warmly. As they moved away together, I heard him gently reassuring her that he’d make more models in the morning.

Reflecting on this incident afterwards, I realised it had touched me deeply. The father, whose absence – he appears only at the very end – is ‘like a presence’ (‘The Absence’, R. S. Thomas), pervades the entire scene, and he exhibits some of the enduring qualities of fatherhood which Christians attribute to God. He is the one who fashioned out of sand those amazing figures, so clearly loved and admired by his daughter. And then, silently standing there, watching over his child, the father mirrors God’s providence and concern. His daughter is in distress, and in the face of that distress he is loving and compassionate, kind and understanding. The little girl in her turn openly loves her father and praises his handiwork. She also gladly accepts the consolation he offers her. An interesting touch is that both daughter and father show mercy: the daughter makes no demand for punishment for the two boys, nor does her father denounce them… Is it fanciful to suggest that this father is in some sense an image, a reflection, of the ‘Everlasting Father’ of chapter 9, verse 6 of Isaiah’s prophecy?

Christians traditionally ascribe to Christ the four Messianic titles given in that verse. All the Hebrew prophets speak first to their contemporaries, and in the proximate sense, Isaiah is referring here to the king of his own times, Ahaz, and appears to be conferring these titles on the recently born royal son, Hezekiah: ‘For there is a child born for us…’ He sees the child as in some sense God’s viceroy: ‘… and dominion is laid upon his shoulders’. Hezekiah began to reign about 720 BC and, influenced by Isaiah, he tried to set his people, religiously speaking, on a fresh course and to make law and justice a reality in his kingdom. Nevertheless, Isaiah did not find in Hezekiah, or indeed in any ruler of his own generation, a truly messianic king, a man after God’s own heart and guided entirely by the Spirit of God. The prophetic vision, however, embraces past, present and future, and Isaiah’s declaration relates also to the ideal king, Emmanuel (cf. Is. 7:14), who would be God’s instrument and offer hope of a universal deliverance by reversing the injustice and corruption of the kings of the past. And for Christians, when, year after year, we sing Handel’s famous chorus, ‘For unto Us a Child Is Born’, during our Christmas celebrations, and when we repeat with triumphant musical insistence the names given to the Child: ‘Wonderful Counsellor, Mighty God, Everlasting Father, Prince of Peace’, it is Jesus we are singing about. We take in our stride even the third of the titles, ‘Everlasting Father’, although, if we think about it, it is the most surprising of the four when applied to Jesus.

For Christians, ‘Father’, as used here, alongside the prefix ‘everlasting’ with its divine associations, offers a compelling theological analogy, through which we learn something of God through our human experience of fatherhood. To call God ‘Everlasting Father’ is to proclaim God’s perennial care for his people, his love and compassion and forgiveness. Yet the Son being named as Father is ostensibly confusing for us, given our doctrine of the Trinity: Jesus’s designation, as the second Person of the Trinity, is not Father, but Son. Jesus the Christ is distinct from the Father, and we refer to him as God’s only-begotten and beloved Son. Jesus himself frequently calls the first Person his Father, prays to him as Father, teaches his disciples to call the first Person ‘Father’ too, and is our advocate with the Father. As the Way, the Truth and the Life, he leads us to the Father. Jesus was sent by the Father, comes from him and, at his Ascension, goes to him. The Father anoints the Son, and commits all judgment to him.

So in what sense may this appellation of ‘Everlasting Father’ be applied to Jesus the Christ? In the Bible, Father, referring to God, signifies the One who is the cause of being, and it may rightly be applied to Jesus, who is, as our liturgy expresses it, ‘the author of our salvation’ (Collect of the second Friday of Advent). The Davidic covenant (2 Sam 7:14) held that God would be to the king a father, and the king would be to God a son. Isaiah appears to be saying that the God who enthroned the kings of David’s line would come himself in the fullness of time and rule as the Messiah-King, as the Father of his people. He sees a divine plan unfolding in history and divine promises progressively realised while moving towards their final accomplishment. For Christians, the Messiah-King is Jesus, who is a Father with respect to those who are adopted into the family of his followers and who, generation after generation, are renewed by his Spirit and grace: to these he is an ‘everlasting Father’. Paul called him the Second Adam, and as such he is the father of the regenerated human race: ‘As in Adam all die, so in Christ all will be made alive’ (1 Cor 15:22). Jesus is, as he himself says, the expressed image of the Father: ‘I came in the name of my Father’ (John 5: 43) and ‘I and the Father are one’ (John 10: 30). For Christians, the Messiah, Jesus, is the ‘Everlasting Father’ (the Douay/Rheims version translates this title as ‘the Father of the world to come’), and is the One who is Sovereign Lord over the ever-changing years – he produces and directs eternity, he will reign for ever.

It is clear that, for Isaiah, the fatherhood of God as expressed in this title is inseparable from kingship; for him, the Messiah would be a powerful and truly righteous ruler. Yet the title ‘Everlasting Father’ encompasses far more than royal power. In the story at the beginning of this article, an anonymous human father is seen to reflect in a humble, everyday way some of the qualities we attribute to God. He reminds us that the Everlasting Father not only rules his people with authority and in justice, but watches over them in love, heals them, comforts them. Does not fatherhood in this sense include and embrace motherhood? Christian theology has always insisted on the essential ‘unnameability’ of God, maintaining that God is beyond all names and words, beyond human gender classifications, in a way that would not have been the case for Isaiah. A long-standing tradition, exemplified especially by Cyril of Alexandria and Anselm of Canterbury, had no hesitation in speaking of God in both male and female terms, and in attributing characteristics most commonly associated with motherhood to the divine. Julian of Norwich confidently followed this tradition: ‘As truly as God is our Father,’ she wrote, ‘so truly God is our Mother’ (The Shewings of Julian of Norwich, §59). She even spoke of the Creation in maternal terms: ‘...we were created by the motherhood of love’ (§60). For her, God is not ‘like’ a mother, but rather, by analogy, a good mother (just like the father in the story) in some way resembles God. How interesting it would be to hear Julian’s comments on this verse from Isaiah chapter 9...